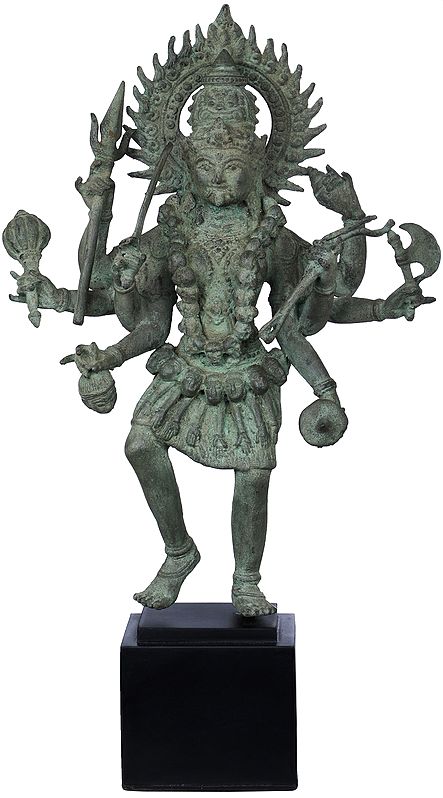 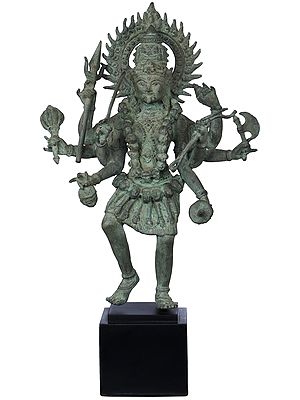 In Sanskrit etymology, Kali means ‘kaal’ or time; she is the goddess of death and time, but brings death only to the self-centred view of reality. She is revered as the dark mother in Hinduism who is responsible for destruction of the evil and a greatest symbol of motherly love. She is a personification of feminine energy, creativity and fertility. She stands here in her fearful form in a nritya posture on a heighted wooden black pedestal with the right leg lifted up and left heel touches it. Here she is depicted in a different gesture, as her iconography portrays her as standing on her consort Lord Shiva’s body.

The sculptor has given her an ancient look with the rock-like brass texture. All her eight limbs carry the ritual implements namely- mace, trident, sword, a severed head, skull cup, whip, conch and axe. She is often represented in her fearful form, with the tongue lolling out in shame, eyes broadened and the long hair dishevelled in anger. She wears a garland of skulls and a skirt of dismembered arms signifying her way to liberate from attachment to body and thus from ego, and is ornated in lustrous jewels.

Mother Kali is mostly depicted in a black or dark blue skin color representing the womb of the quantum manifest from which all of the creation arises and into which all of the creation will eventually dissolve. The look of her fierce uniquely styled large aureole and the beautiful and elegant crown on her head, aptly compliments Kali’s dual nature of her wrath for the negativities and the beautiful love for her children.