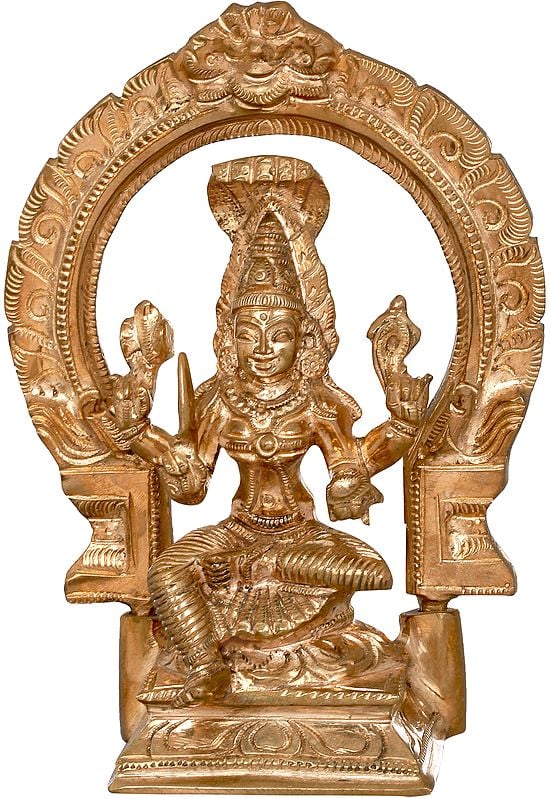 $163.00FREE Delivery
(Rated 5.0)
Devi Mariamman, the revered Devi Mata (mother) of the South, is akin to Devi Parvati, Devi Shitala, and Devi Olai Chandi. Her name is portmanteau of mari, which is Tamil for rain, and amman, which means mother. She is the presiding deity over the rains and, in rural Tami Nadu, Her blessings are sought for agricultural abundance. While the iconography of Devi Mariamman is every bit in keeping with the traditional Hindu Devi iconography, the murti that you see on this page is a distinctly Southern image. This is primarily owing to the medium of bronze, a heritage of the Southern sculptural tradition.

A compact, handheld sculpture. Devi Mariamman is seated in lalitasana in the mouth of a lotus. She is the chaturbhujadharini, the one possessed of (‘dharini’) four (‘chatur’) arms (‘bhuja’). In Her hands She holds a lotus (posterior right), a conch (posterior left), a long and slender weapon indicative of Her wrathful streak (anterior right), and a bowl (anterior left). From the navel downwards She is clad in a silken dhoti, while a world of shringar graces the youthful, maternal curves of Her upper body. Her attire is a signature element of the iconography of the South.

In addition to the same, other signature elements of Southern workmanship are the angular face set with sharp, handsome features; a tall, tapering crown; and the Kirtimukham aureole that stems straight from the pedestal. A ferocious snake raises its five conjoined hoods above Her crown, another expression of the wrathful streak of Devi Mariamman.