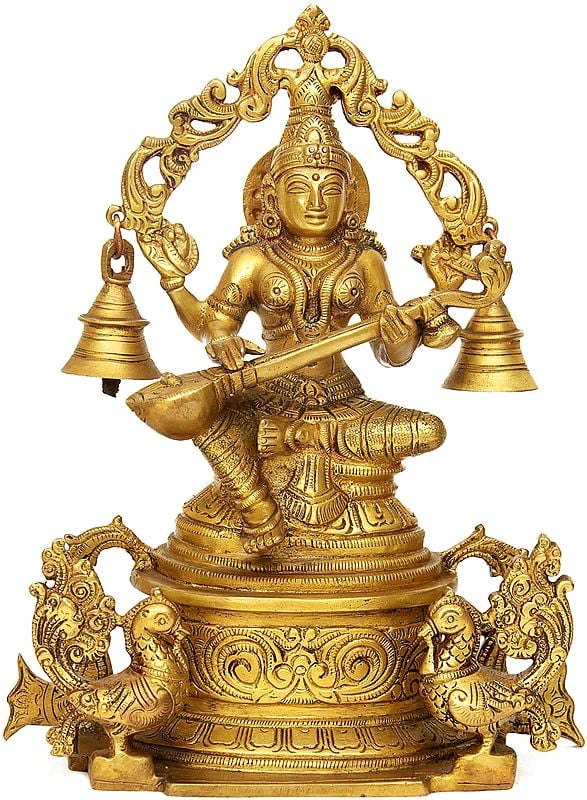 This is a natural brass sculpture of Goddess Saraswati. She is the shakti, power and consort of Brahma, the creator. She is the mother of the entire nation. She is considered as the personification of knowledge, arts, sciences, crafts and skills. She is shown holding a musical instrument veena, representing creativity.

Saraswati literally means ‘the flowing one’. She represents a river and the deity presiding over it. Therefore she is connected with purification. She is known by different names such as, Sarada (giver of essence), Vagisvari (Mistress of speech), Brahmi (wife of Brahma), Mahavidya (knowledge supreme) and Veena Vadini (Veena seeker). Her four arms show her unimpeded power in all directions. She has two carrier vehicles , the swan and the peacock.

In this statue she is sitting on a beautiful multilayered high pedestal in a lalitasan posture. She is shown playing Veena having two hollow tumbas (globes) on either side representing that no one can drown in this worldly ocean. In the other two hands she is holding a aksamala (Rosary) symbolizing spiritual sciences or yoga, also includes tapas, meditation and japa (repetition of divine name) and ved (book) indicating secular sciences in the other hand. There is a big temple shaped adornment on the side, joining over the head with two bells hanging on its either sides making it look mesmerizing. She is wearing two necklaces and an ankle lengthed dhoti. There are two peacocks standing at the bottom, on either sides of the pedestal for the glorious world symbolizing avidya (ignorance).