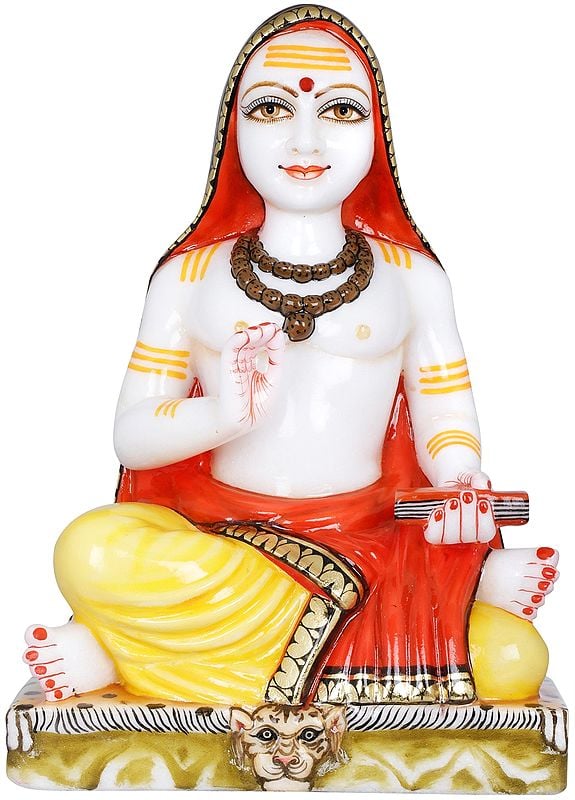 FREE Delivery
Only 1 available
$896.25
$1195
(25% off)
Jagadguru Shankacharya or Adi Shankacharya was an 8th century Hindu philosopher and theologian who set up four monasteries in North, East and West India which were known Mathas. He is also known for the consolidation of the doctrine of Advaita Vedanta. He is also regarded for unifying and forming the ongoing important thoughts in Hinduism. Adi was also the founder of 'Dashanami Sampradaya' also known as the 'Order of the swamis' which is a Hindu monastic tradition of single staff renunciation.

The expertise craftsmanship is shown in this white marble statue the respected Jagadguru. The hues of red and yellow blend in with the white marble producing a bright yellow dhoti and a scarlet-red cloth that is enveloped around his firm statured sculpture. His finely carved face is complimented with a blood red teeka set between his eyebrows along with three yellow stripes that festoon and arms respectively, with his sparkling, golden eyes piercing through infinity. The sculpture is embellished with a brown-beaded necklace that drapes over its chest and his nails painted bright red going along with a beautifully-made, maroon harmonica in his left hand. The statue blesses the human kind as its right hand is raised for giving them bounties and blessings.

He is even considered to be the ideal Sanyasi. Therefore, The very fact that Hinduism is still a dynamic religion stands due to ample testimony to the deeds of Adi Shankacharya, who renounced worldly pleasures at a very young age. He was a strong proponent of the oldest Hindu concept of the integration of the soul and the Supreme soul. Adi Shankara's works are the foundation of Advaita Vedanta school of Hinduism, and over 300 texts are attributed to him.