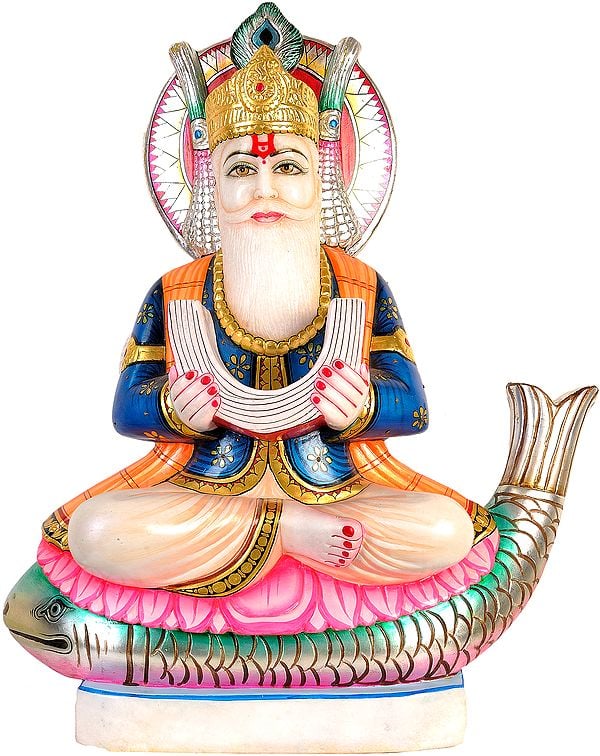 This marble statue, appropriately painted giving a painting’s effect, represents Jhule Lalji, a human-born elevated to the status of a god in his very lifetime itself and venerated for that reason as Zinda Pir – a living god. A legendary figure believed to emerge riding a fish out of the river Sindh Jhule Lal is also known as Dariya Lal – the glorious son of Dariya, a Turkish term for river. In popular tradition Jhule Lal is believed to have his seat over the waters of the river Sindh or the sea and to incarnate the sea-god Varuna. The tradition believing in his divine birth claims his emergence from under the waters with a lotus, his seat, and a large fish, his mount. Sometimes a horse is also claimed to be his mount. When he emerged, he is believed to have his palms upwards held as when praying for God’s bounty – a characteristic Islamic mode of praying, upholding on them a large manuscript which perhaps the water pressure turned into a semi-circular ‘U’ form.

This image of Jhule Lal carved out of a fine-grained marble rock, neither a vein, a knot nor a discolouring spot revealing, represents the divine figure in absolute adherence to his iconographic tradition. The image of the holy one has been sculpted as seated on a full blown ‘sahastra-dala’ – thousand petal lotus laid over a fish as large as afforded adequate space for the divine figure to seat. The well-contented fish, divine ecstasy bursting on its face, fully enthused upholding its tail like a boat’s hood, has under it a plain moulding with its apex painted in blue symbolic of water over which the fish appears to swim. The figure of the holy one has been conceived as seated in ‘yogasana’, a cross-legged posture with the lower half firmly settled for a longer sitting as required when performing meditation. He is holding his hands as when praying and has held on them a multi-leaved manuscript. A sword is one of his usual attributes but he neither carries nor has any around him.

An incarnation of the sea-god Varuna, the dominant colour in his vestment – his upper wear’s, is marine blue, though Varuna himself being in Vaishnava line, Jhule Lalji’s ‘antariya’ – lower wear, and sash over his shoulders are in various shades of yellow : pinkish and saffron. Varuna is the custodian of all riches which reflects also in the richly embellished costume of the image – both the coat and the ‘antariya’ lavishly worked with gold thread.   The marble’s purity as reflects in this sculpture, more so in carving his gorgeous white beard, moustaches as also the life-like eyes and other features of the face, is simply rare. The image has been so modeled that it synthesizes with the divine serenity and composure the vigour of youth with which the image, though conceived to represent his elder days, bursts. But for his beard his figure has been modeled with an oval face with a well defined nose, well fed cheeks, arched eyes, elegantly trimmed eyebrows and a broad forehead with a Vaishnava ‘tilaka’ mark in the centre. Besides his strangely modeled crown he is putting on around his neck a lace consisting of large gold beads which on one hand frames his beard, and on the other, mounts the collar of his coat. His headgear with a large peacock feather cresting it and bunches of other peacock-feathers and laces of pearls flanking it on either side linking him with Krishna’s Vaishnavism, is a characteristic feature of the iconography of Jhule Lal Ji. A large halo defines the headgear’s back.

Broadly, Jhule Lalji was a regional god of Sindh, a province now with its larger part in Pakistan, worshipped in the region for over a millennium and subsequently world-over by the Sindh-migrants especially after India-Pakistan partition. Under normal chronological order Jhule Lal Ji was born sometimes around the mid tenth century, perhaps 950 AD, on the second day of the month of Chaitra, the first month under Indian calendar. As it happened, a tyrannous Islamic ruler of Central Asia, Mirkshah, conquered Sindh around the mid-tenth century. He ordered all to either embrace Islam or be ready to die. Sindh had a large Vaishnava population which was under the threat of death. Jhule Lalji emerged as the savior. He convinced the Islamic ruler to let them have some time to think. They were allowed forty days which period, now known in Sindhi tradition as ‘Chaliho’ preceding the festival of Cheti-Chand, is among the Sindhis the most sacred period of rituals. For these days that they were allowed to make up their minds they spent in arduous fasting on the banks of river Sindh, now Indus, meditated and prayed, and it so happened that before the deadline ended Jhule Lal Ji succeeded in convincing the Islamic ruler that both Hindus and Muslims were alike and so was their God except differently named in two sects. His efforts bore results and Hindus were allowed to follow their own path. Now parallel to Viashnava gods they began worshipping Jhule Lalji as their Ishtadeva – personal deity, under various names, the main among them being Lal Sai, Udarolal, Varuna Dev, Doolhalal, Darialal, Zindalal… His birth day, the second day of the month of Chaitra, marked the beginning of their annual calendar and was celebrated as the most important annual festival known as Cheti-Chand.