Khajuraho Nymph: Remembrances Of An Admirer 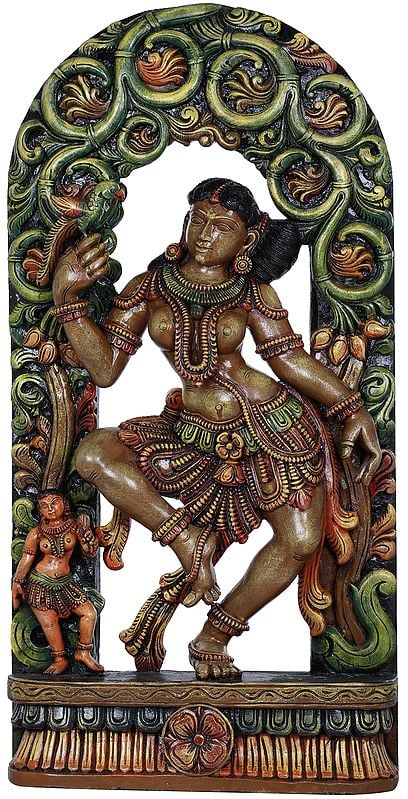 $795.00
(Rated 5.0)
A gorgeous maiden dances with her parrot. She is at a post-pubescent age, not quite grown-up but mature enough to be a woman. The sharp curves of her youthful shape are revealed rather than concealed by the tasseled dhoti she is wearing, the only bit of attire on her body. The rest of her is adorned with a multitude of shringar, its colours as vivid as the mood she is in.

It is in the loving remembrances of an admirer that she dances. On one hand is perched the parrot that sings of his bygone presence; by the side of her hip jutting out laterally, is stretched the other hand in graceful poise. With a leg bent at the knee, the other is raised from the lotus pedestal on which she stands, revealing the sturdy, seductive musculature of her legs. Her movements are irresistible; her youth and freshness, undeniable.

There is a kind of soft, soothing comeliness about her face. Her thick black hair is gathered in a luxuriant bun on one shoulder, held in place by brilliant red beads. The sheer variation in colour of her attire and adornment is complemented by the densely packed engravings on the aureole that surrounds her - from the graciously curving vines to the lotus buds and bamboo shoots nestling within, each of them are superimposed with rich pastel tones.