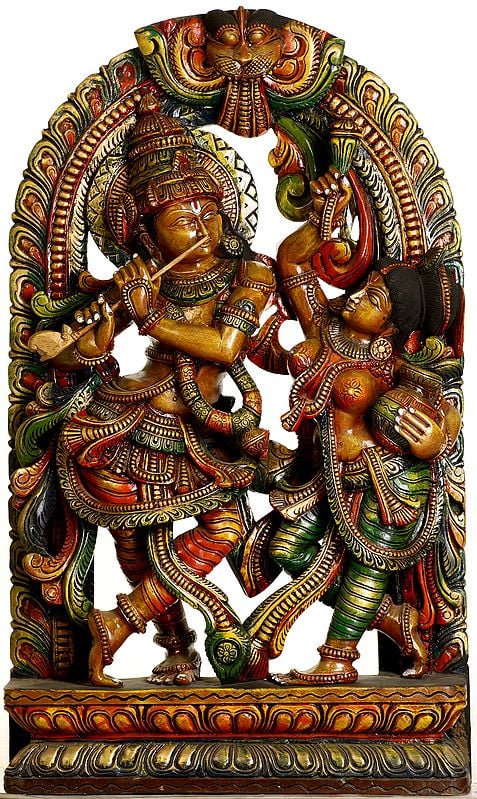 Krishna Absorbed in Playing on his Flute: Dancing Radha Accompanies

$1680
FREE Delivery
This item can be backordered
Time required to recreate this artwork
20 to 24 weeks
Advance to be paid now
$336 (20%)
Balance to be paid once product is ready
$1344
Notify me when this item is available
This magnificently carved and brilliantly painted wood-statue, revealing gold-like lustre, rare in finish and quality of image, one of the finest examples of temple wood-carving, represents Krishna playing fully absorbed on his flute while Radha with a lotus in her right hand, and a pot, in left, standing close to him on his left. Offering wooden images of deities to a shrine has been one of the popular religious practices in South India prevalent now since long. Believing that finer the image it would better propitiate the enshrining deity the donors looked for more artistic sculptures which encouraged wood carvers to use the best of their talent not merely in discovering greater details and artistic merit of the image but also for discovering each time a new aspect of the illustrated myth. Thus, religion and art can be seen as joining hands in creating the great tradition of South Indian temple wood carving giving to the world beyond temples some of the finest art pieces and revealing many aspects of myths now otherwise completely forgotten. The statue is the most accomplished example of temple wood-carving rendered with an ornament-like precision and accuracy as well as great emotional fervour.

The figures of Radha and Krishna are rhythmically poised. As entwining along the melody emitting from his flute the figures of both Radha and Krishna seem to surge like waves, creating with their rise and fall highly delightful forms. Completely absorbed Krishna could not know when his left leg turned to right, and correspondingly his entire figure, the left knee, to further left, hips to right, shoulders to left and face to right. The melody seems to ring Radha’s being with far greater elasticity as in ecstatic dance and when completely moved and emotionally charged. A strange parallelism, perfectly aligning to Krishna’s body-posture Radha’s right leg has moved to left, hips, too far to left, the entire figure beyond belly : breasts and shoulders, to right sensuously inclining to Krishna’s figure, and a fully absorbed face to left : a pleasant geometry seeking to create the magic of diagonality. Known in Vaishnava iconography as ‘tri-bhang’ – three-curved, this posture of Krishna’s figure is the most celebrated form of his image, one enshrining the Banke-Bihari temple at Vrindavana, one of the four most venerated seats of Krishna’s Vaishnavism.

The figures of Radha and Krishna enshrine ‘prabhavali’ – fire-arch, a widely used element in South Indian divine iconography symbolising cosmos that the represented divinity pervades. The ‘prabhavali’ rises from a lotus base consisting of a pair of lotus mouldings : the lower one with a course of green inverted lotuses symbolic of fertility and thus of the earth, and upper one, a course of red upward lotuses symbolic of fire or energy, that is, the sky, a middle consisting of a course of stylized lotuses, and the rounded apex topped by a prominent Shrimukha motif symbolising supreme good. The figures of Radha and Krishna also have been carved pursuing South Indian iconographic models of Vaishnava images not merely in the style of costumes or ornaments but also in iconography and figural anatomy. Krishna has been modeled like Lord Vishnu in his proto form, and Radha, like his consort Lakshmi.

The figure of Krishna has been carved with Vishnu-like towering, styled and lavishly wrought crown, mark of Vaishnava ‘tilaka’ on his forehead, Vaijayanti on his breast and elaborate ornamentation, besides the moderate height of his figure, a rounded and little voluminous face and a strange stoicism coupled with emotional bearing. The statue of Radha, the cowherd maiden of Brij, reveals the same emotional fervour as should Radha mad in Krishna’s love, not the formalism of Lakshmi’s images, especially as reveals in her South Indian icons; however, the lotus in her right hand and pot in the left – both more characteristic to Lakshmi’s iconography, lavishly crested coiffure, majestic ornaments, large kundalas – ear-ornaments in particular, rich costume, vermilion paint in the hair-parting suggestive of her status as a wedded woman, and her well swelled breasts – the essence of the anatomy of Lakshmi, the universal mother who sustains and nourishes the entire cosmos, link her form to Lakshmi. As an art-piece, the statue is outstanding in plasticity, modeling, proportionate anatomy and aesthetic quality.