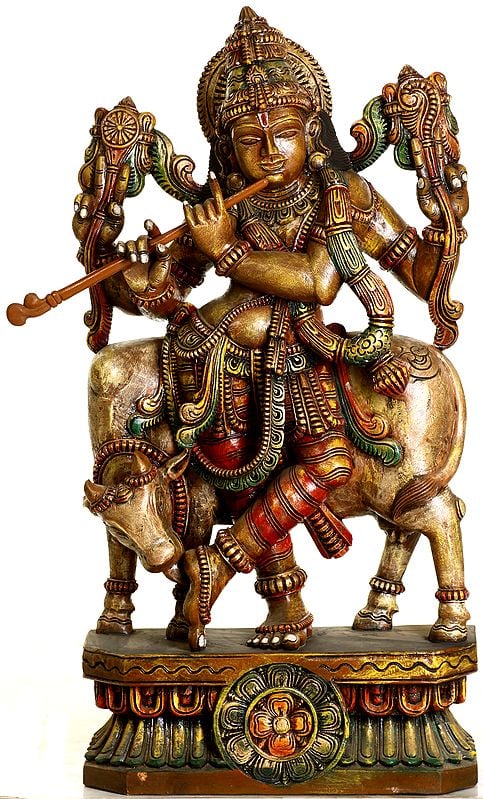 Krishna as Vishnu Blowing His Flute

$1260
FREE Delivery
This item can be backordered
Time required to recreate this artwork
20 to 24 weeks
Advance to be paid now
$252 (20%)
Balance to be paid once product is ready
$1008
Notify me when this item is available
An excellently crafted wood-piece, the statue represents straight way its theme: Lord Krishna as Vishnu blowing his flute, and dragged by its magic a cow draws to him, submits to him and as a token of her love and dedication caresses with its mouth his raised foot from behind. Led by the melody that he has himself created, the ecstatic Krishna is emotionally moved and leans over the cow’s back for support. The statue has not incorporated any paraphernalia, not even a routine Prabhavali – fire-arch, except a formal lotus base to install the image, perhaps a simple aesthetic maneuvering to keep eye engaged solely with the image, or in an attempt to reveal the usual mysticism which the devotional cult of Krishna often reveals : when his divine melody reaches one’s heart, all distances and forms eliminate and the seeker and the sought unite in inseparable unity, and then there is only Him and the void. The statue is rare in modeling, plasticity and iconographic perception. The downwards turned eyes as absorbed in melody, a slightly elongated face with sharp elegantly conceived features and a small pointed chin make the piece simply outstanding.

This mode of Krishna’s image, standing in a three-curved posture, known as ‘tri-bhanga mudra’, most of Krishna’s standing images being in ‘tri-bhanga’, playing on his flute, and a cow drawing to him, is known in the theological as well as artistic tradition as Dhenu-Gopala. The term ‘dhenu’ means cow; and, ‘Gopala’, a combination of two terms, ‘go’, meaning cow, and ‘pala’, meaning ‘keeper’, also means the patron of cows. Thus, it appears that the epithet repeats the terms denotative of cow twice. It is, however, only a very simple meaning of the term. Cow is symbolic of the earth, and ‘go’, besides cow, also denotes senses. It gives to the term ‘Dhenu-Gopala’ symbolic breadth suggesting that Krishna, the patron of the earth, is also the patron of senses, the pith of Vaishnavism that perceives the path of redemption across material or rather sensuous avenues. The wood-piece represents Lord Krishna as standing with his body curving rhythmically with curves, first, at foot joint, second, at knee-joint, third, at waist, fourth, at shoulder turning the figure into five directions, though the posture is known as ‘tri-bhanga’, that is, three-curved. With his three curves he is believed to pervade three worlds or three cosmic regions, and with his five, all five directions.

The figure of Lord Krishna is placed on a pedestal with moderate height and varying geometry, the back being rectangular, while the front, a half hexagon composed of stylized lotus motifs and a floral medallion in the centre of the forearm. The four-armed figure of Lord Krishna, carrying in his normal two hands his flute and playing on it, and in other two, ‘chakra’ – disc, and ‘shankha’ – conch, is standing in the centre of the pedestal. Behind his figure stands a well-adorned cow affectionately moving its tail as well as its face, eyes and head towards the flute playing Krishna. The cow seems to caress his upwards raised foot as if out of obligation for working its redemption.

The divine form of Lord Krishna is clad in an elegantly pleated ‘antariya’ – lower wear, adorned with a broad girdle composed of beaded strings and laces of phalis. Tugged with the girdle there are two sash-like beautifully designed decorative textiles unfurling on sides. The tight-fitted ‘antariya’ is elegantly pleated. Around the shoulders he is putting on a proper sash flanking on either side. He is wearing a multi-tiered splendid crown made of fine gold and inlaid with precious jewels topped by a finial motif, and around it, there reveals great divine aura concretizing into a halo. On his forehead he has the mark of a Vaishnava ‘tilaka’, and in his ears, the mythical Vaishnava ‘kundalas’. He is also putting on a wide range of ornaments, heavy and light, bangles, bracelets, armlets, necklaces, anklets and the like. Besides a long laced garland composed of large phali-motifs, he also is putting on a thickly conceived garland as if made with multiple laces of flowers reaching down to thigh-height : the characteristic Vaishnava Vaijayanti of celestial Parijata flowers.