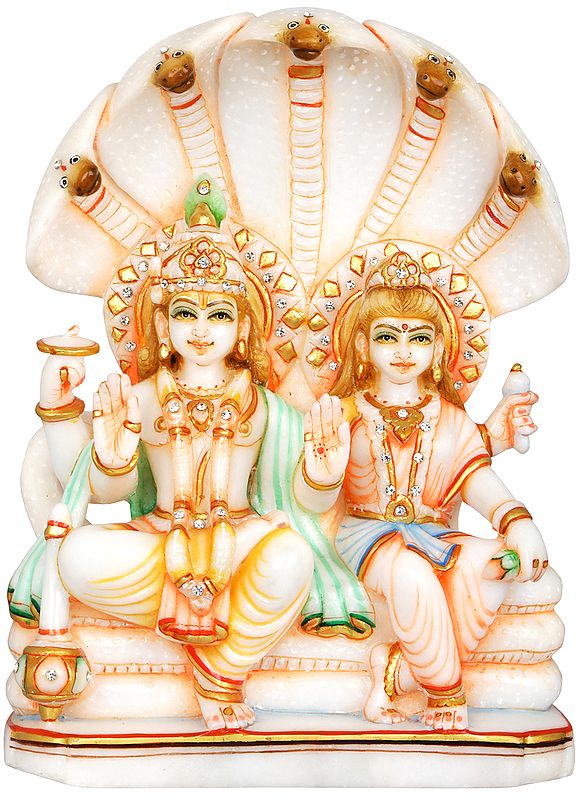 Vishnu, the lord of Vaikuntha and the Paalankarta (preserver) of the creation, and Lakshmi, the goddess of opulence represent the perfect conjugal vision in Hindu tradition, so much so that the forms they take- Sita-Rama and Radha-Krishna are also seen as the zenith of the bond between a man and a woman. Their togetherness is the ideal balance of the male and female elements that complement each other in such a manner, that the aura of their heavenly harmony gets absorbed by the universe, making it a reflection of the blissful lovingness of Lakshmi-Narayana.

Placed on a comfortable bed of the coils of the Adi-shesha, ethereally beautiful Vishnu and Lakshmi, in this marble idol appear to be made for each other. He is a picture of stability, calmness, strength, and benevolence, and she is the embodiment of virtuous wealth. Both are resplendently dressed and ornamented with tiny gem-studded jewellery. Praiseworthy is the treatment of facial features- eyes, nose, and lips that are exquisitely life-like. To the king and queen of the universe, the serpent Adi-Shesha provides a Chatari (umbrella, also a royal insignia) of its enormous hood.

The bestower of wealth Lakshmi, is often known as Chanchala- because of the fact that she cannot be restricted to one place. However, she eternally remains with Vishnu, as his dutiful wife, assisting him in his role as the saviour. Vishnu is Vikrami (one with valour), Hrishikesh (who is in control of his five senses), Satya (truth personified), Amogha (whose actions are never futile), Nyaya (justice), and Atul (unmatched). Charmed by these great characteristics Lakshmi makes him Srinivasa- the adobe of Sri (another name of Lakshmi).

Inspired by the relationship of Lakshmi with Vishnu, rulers in the ancient period aimed at embodying the qualities of Vishnu, becoming the protector of their realm, and following the character of Lakshmipati (Lakshmi’s husband). The togetherness of Lakshmi and Vishnu proves that luxury, wealth, and auspiciousness, as unstable as it is, choose resolute righteousness. Vishnu represents Shubha karma- pious actions, not for fame and wealth but for the betterment of life. Only these actions make Lakshmi truly happy. Thus, anyone who seeks to achieve the benevolence of Lakshmi has to emulate the virtues of Vishnu, and anyone who receives the divine gaze of Vishnu will naturally be conferred the boon of everlasting fortunes.