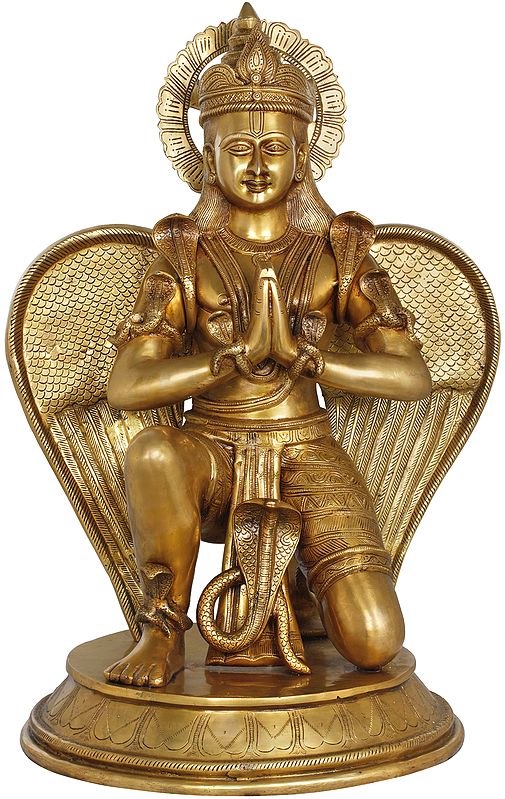 $2850.00
Garuda is a legendary bird or bird-like creature in Hindu, Buddhist and Jain mythology. He is also the vehicular mount of the Hindu god Vishnu and is described as the king of birds and a kite-like figure, who is generally considered to be a protector with power to swiftly go anywhere, ever watchful and an enemy of the serpent.

The ravishing and artistic figurine captivates the sight of the onlookers, as the Gold colored brass, produces an aesthetic memory of the valorous Garuda. The majestic figure is encapsulated with finely carved, angelic wings, embossed with deep and straight lines, that drape over the deity's arms, with an illuminating, circular aureole that brightens up around his head, as his tidy and long hair drops down his nape, held in place by a forehead band crown that is emblazoned with leaf-like designs that give him a lovely and alluring mien.

The beauty and elegance reaches a divine level with the remarkable waistband that is accompanied with a pleated cloth that hangs as the sculpture bows down greeting the onlooker with a welcoming 'Namaste'. Despite, the Garuda's known enmity to snakes he is adorned with serpents, all over him, who carve around his arms and ankles as jewelry, contrasting the beaded choker necklace that tightens around his neck, enhancing the gracefulness of the figurine.

23 inches width includes the Wingspan.The Diameter of the Base is 19 inches.