Large Size Buddha Calling The Earth to be His Witness 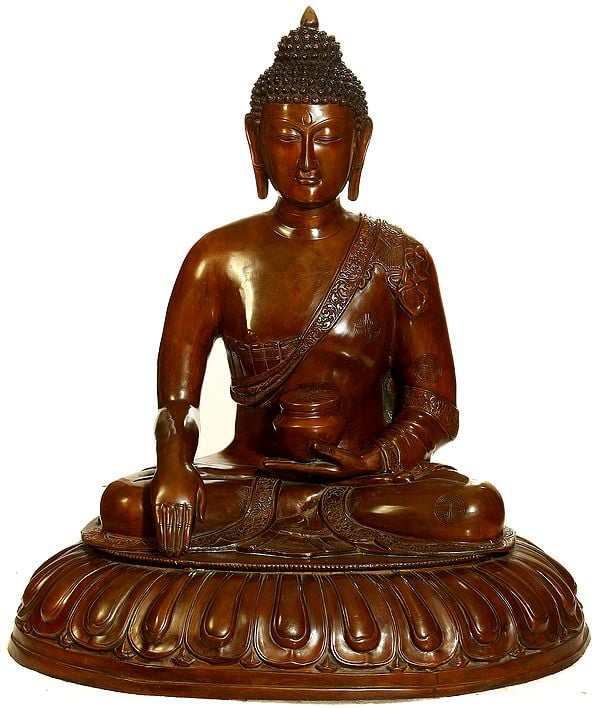 Large Size Buddha Calling The Earth to be His Witness

$1295.00
FREE Delivery
(Rated 5.0)
Quantity
Usually ships in 10 days
Notify me when this item is available
Post a Query
This image of the Buddha represents him in bhumisparsha-mudra, a posture in which he is depicted as touching the earth. In the Buddhist tradition, Buddha's life cycle is classified in three broad divisions, the Buddha, or the phase of his Enlightenment, the Dharma, or the phase when he initiated a new doctrine and the Sangha, or the phase when he founded a new monastic order. These divisions are hence also called as founder, doctrine and monastic order. In iconographic representations the Buddha, when representing the first of these three phases, is known as Akshobhya. The Buddha representing the second phase, that is, the Dharma, is known as Vairochana and the third as Amitabha. The first of these three phases, addressed as Buddha, founder or Akshobhya, is represented in Buddhist iconography by this bhumisparsha-mudra, obviously, because this earth touching episode is the turning point of his life which leads him to Enlightenment and the status of the Buddha. It depicts the stage, when immediately before his Illumination, he defeats the last of the obstacles in the path of his realisation of the supreme truth. A number of sculptures and bronzes recovered from various Buddhist sites depict these three phases in isolated sculptures but sometimes also in a single stone piece or a well connected metal cast, which seems to have enshrined an altar conjointly. The first phase, known as Akshobhya, manifested in his bhumisparsha-mudra, the second one, known as Vairochana, manifested in Dharmapravartana-mudra and the third, known as Amitabha, manifested as engaged in Dhyana. Of these three, the image in Dharmapravartana-mudra has greater significance in Buddhist tradition and is hence usually installed in the centre and often on a double lotus pedestal, or a more elevated pitha, while the other two have only single lotus pithas.

The episode in which Lord Buddha invoked the earth has great significance both in Buddha's life as well as in the Buddhist tradition. It was around the end of his six year long meditation that Mara, the Evil One, renewed its efforts to distract the Sakyamuni from his path and destroy his concentration. Mara sent to him many of its minions, the tempting nymphs and horrifying demons, hunger and affluence, parching heat and icy cold and the bonds of life and the fear of death, but Gautam conquered them all. Now delusion was the only weapon for the Mara to try. For deluding every one and every particle of the cosmos, Mara screamed loudly acclaiming a false triumph, "You are vanquished, Gautam". The Sakyamuni kept quiet but he extended his right hand till his fingers reached the earth and calling upon her prayed her to bear witness that he had defeated the Mara and its minions. Soon after he overcame the Mara, the light exploded within and he was the Enlightened, the Buddha.

This brilliant image of the great Lord, installed on an oval platform, which lay over a lotus, one symbolising the earth and the other the ocean and conjointly the two symbolising the earth afloat ocean, represents this turning point of Buddha's life. With his legs folded he is cast seated in the padmasana posture. His extended right hand is firmly planted on the earth, which defines the conventionalised form of bhumisparsha mudra. Serenity, composure, contemplative demeanour and a kind of confidence are the essentials of this excellent image. The drapery known as sanghati is marked by unique refinement and sophistication. Its border elegantly textured with floral designs and lying symmetrically on the earth in front and under his folded knees adds great aesthetic charm to this icon of Lord Buddha. The sanghati has been rendered in Kashmiri character. Half drooping eyes, narrow sharp nose, conical face, long ear-lobes and the mound-like ushnisha are usual characteristics of Buddha's iconography but. they have in this representation a Nepali touch. The foliating designs on sanghati's border symbolise the Bodhi tree in Buddhist tradition.