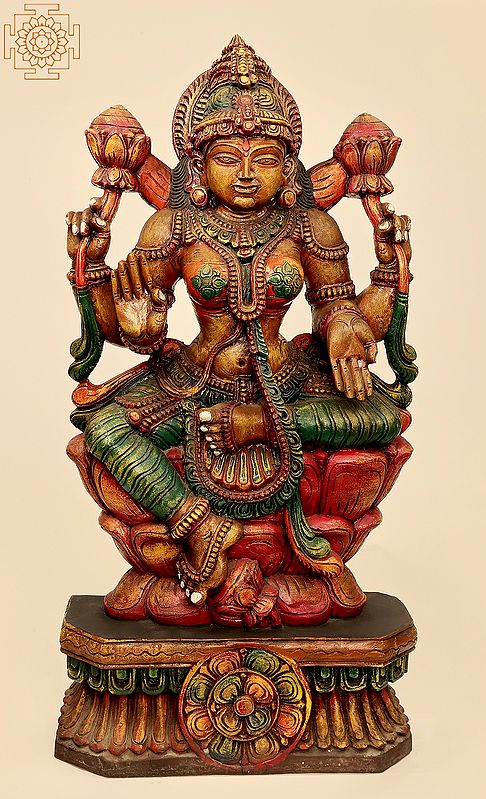 Highly symbolic and sensitively treated this wood-statue, a characteristic example of South Indian temple wood-carving, rendered with fine details and painted brilliantly discovering not merely the aesthetic beauty of the image but also its inherent dimensions, represents the four-armed goddess Lakshmi in her most accomplished manifestation covering the growth of her cult right since Vedic days. The divine dimensions of goddess Lakshmi as one who bestows abundance, plenty of food, progeny… are identified in the Rig-Veda itself, the head-source of entire scriptural knowledge. The subsequent Atharva-Veda further widens the divine aura of the goddess as the universal mother with large breasts full of abundant milk, the inexhaustible source of life. Hence, ever since Lakshmi has been perceived in scriptures and visual art forms as the goddess manifesting riches, prosperity, accomplishment and sustenance, and her form, essentially as large-breasted, as representing supreme beauty, absolute womanhood and timeless motherhood, the source of endless life.

In many of its verses the Rig-Veda lauded the earth for fertility and for giving abundant food. Despite that she is not classed either as the goddess or as the mother, or invoked as such, the text’s reverence for the earth is very high. Fertility aspect and their power to bestow abundant food being common, the reverence for the earth seems to have subsequently merged with the divine aura of Lakshmi. In subsequent days after Lakshmi was being seen primarily as the goddess representing riches, prosperity and abundance – as the goddess of rich, prosperous and wealthy traders and elite, hardly ever reaching the farmers’ fields, a separate divine form, consecrated as Annapurna, emerged for representing the food-giving divinity. An aspect of Lakshmi, Annapurna developed her own iconography and got a number of shrines, especially in southern part of the country, dedicated to her. Delightfully, this image of goddess Lakshmi incorporates, besides her own cult as the Rig-Veda initiated, also the aspects that the mother-earth and Annapurna manifest.

Perfect in anatomy, modeling of figure conceived with large breasts abounding in rare beauty and absolute womanhood, the statue represents the four-armed Lakshmi in adherence to her form as evolved in Vedic literature, the Rig-Veda and the Atharva-Veda. Enshrining the lotus seat in her own right and with none of the Vaishnava attributes defining her form she reveals the status of an independent divinity, not one of Lord Vishnu’s consort, as subsequently the Puranas attributed to her. As suggests the anatomy of her figure, especially her well developed breasts clad with red and green stana-pata – breast-band, red symbolising energy, green, fertility, and large breasts, her power to feed and sustain, the artist has modeled his figure of the goddess to reveal ultimate motherhood. He has styled the apexes of the lotuses that she is holding in her upper hands like pots, the attributes of Annapurna, the food giving mother, who stored in her pots inexhaustible stocks of food. Further, he has preferred her image to enshrine a large lotus, and another, to support her foot. Both the lotus and the pot in Lakshmi’s iconography are denotative of her dairy-agrarian links that she shared with the earth goddess.

The statue represents the golden-hued goddess seated on a full blown multi-petalled lotus in ‘lalitasana’ revealing ultimate beauty, rare grace and great majesty. Besides the larger lotus she is seated on, she has a tinier one, quite cute as it looks, as the foot-raise under her right foot suspending below. Consisting of five cosmic elements : earth, water, fire, air and space, the lotus represents the cosmos. While seated on it she pervades it and thus symbolically the cosmos, which she upholds and sustains, the essence of her being. Lotus symbolism further continues. In two of her upper hands she is carrying lotuses, while the normal right is held in ‘abhaya’ – assuring freedom from fear, and the normal left, in ‘varad’ – assuring accomplishment of the desired. The upper hands are sometimes interpreted as conducting divine energy that the goddess inherently draws from unseen zones for accomplishing her divine act that her ‘abhaya’ and ‘varad’ granting hands symbolise. In aesthetic merit, craftsmanship, modeling, plasticity, iconographic perfection, fluidity of figure, and symmetrically balanced parts and anatomy, the statue is simply outstanding.