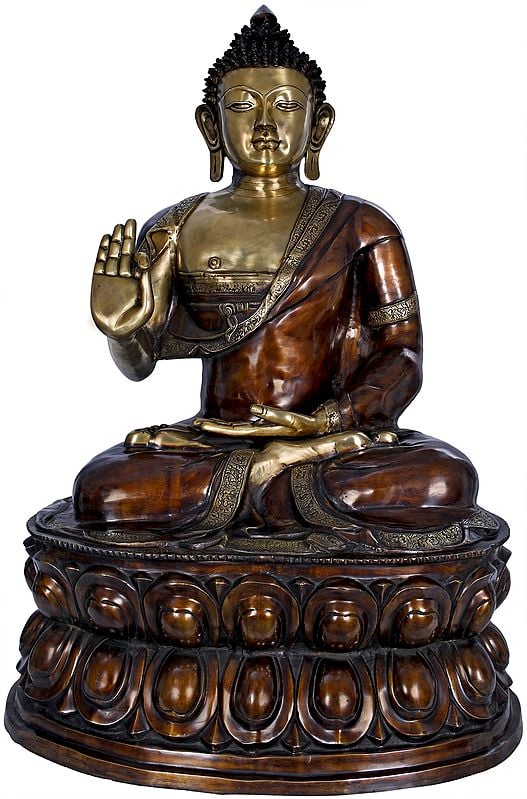 This is a brass statue of Gautama Buddha. Buddha means, the enlightened one, which represents the one who knows and who has achieved wisdom. This is a Tibetan Buddha, as in Tibet, Buddhism is a dominant religion, it is also a part of tantric tradition, so its early teachers were also tantric masters. It is also known by the name of Lamaism which is a branch of Tantric tradition. Dalai Lama is the best known face of Tibetan Buddhism. It is an elaborated form of a traditional and simple religion having bright, colorful and excessive arts and rituals.

This posture of Buddha shows the Vitarka Mudra or Dharma Chakra mudra gesture. It shows Buddha sitting on a double lotus in yoga posture. The left hand is resting on the lap, where thump is slightly up and four fingers are straight, joined together pointing to the right. Right hand is held high close to the chest and palm facing forward, where the tip of the thumb and index finger are touching each other forming a circle which symbolizes the never ending flow of energy and the other three fingers are straight pointing upwards. This mudra tells about the teachings of Buddha which he achieved after enlightenment. This gesture is called, the gesture of discussion that can be used in communication of wisdom or his teachings. This sculpture has a goldenish colored body, wearing a dark brown colored robe covering the whole body except the neck and right side of the chest from front. The robe has a thick embroidered golden border enhancing its richness. Buddha has short and tight hair in the shape of small beads curled together like a temple top. His hair represents freedom from the cares of the world. He has long earlobes as he is said to have the ability to hear world’s sound. They represent a conscious rejection of the material world in acceptance of spiritual enlightenment.

This statue is said to be auspicious for home or office as it personifies knowledge, understanding and wisdom.