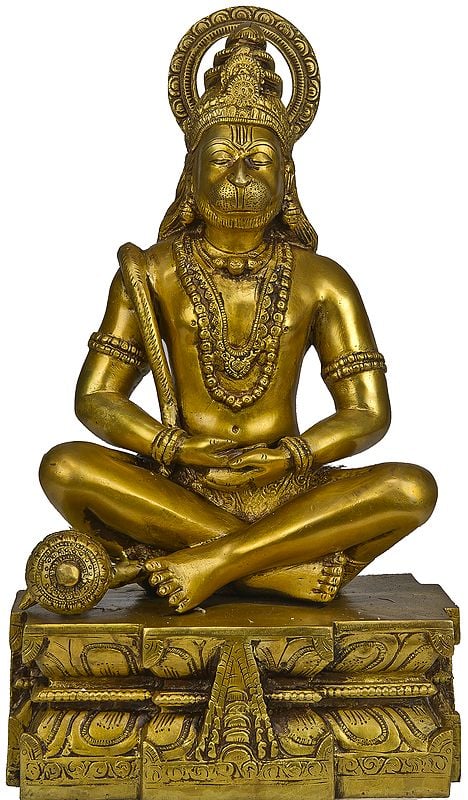 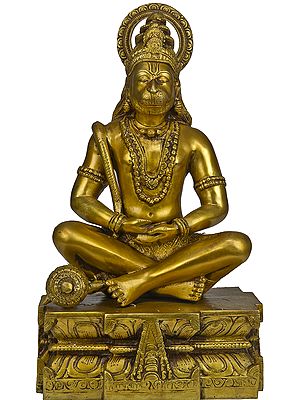 $395.00
FREE Delivery
Quantity
Usually ships in 10 days
Notify me when this item is available
Post a Query
Hanuman is the son of the wind-god Pavan, and the celestial nymph (apsara) Anjana. He is given his chief role in the Ramayana where he is acknowledged to have assisted Rama in his victory over the demon Ravana. Hanuman is greatly extolled in Hindu literature, and his exploits form the subject of many legends. He is regarded as divine and his supernatural powers are attributed largely to his celibacy (brahamacharya). He was learned in the scriptures, a perfect grammarian, and excelled in all the sciences. Hanuman could change his shape at will, had incredible strength and could also fly through the air. Many tales are told about his tail which was of immense length. Here it can be seen winding across his shoulder, moving under his right leg and finally coming to rest over his mace, lying to his side.

Contrary to his usual dynamic posture, Hanuman here is shown poised in meditation. Indeed one of Hanuman's epithets is Yogachara, 'the master of yoga.' Wearing a short-patterned loin-cloth, he is adorned with necklaces of pearls, elaborate earrings, and an intricate three-tiered crown. This figure epitomizes Hanuman's character at his very best - powerful, as his bulging muscles show, and humble, as exemplified in his calm, relaxed, and unpretentious meditative demeanour. Here is the monkey general adored by countless devotees for the impossible feat he performed - locating Sita by jumping across the ocean to Lanka, giving her a message form Rama, and returning to fight the final battle. He is the one whom devotees beseech for help when confronting difficulties:

(A popular Sanskrit prayer to Hanuman)