Lord Nagarjuna, The Saint That Emerged From The Serpent Kingdom 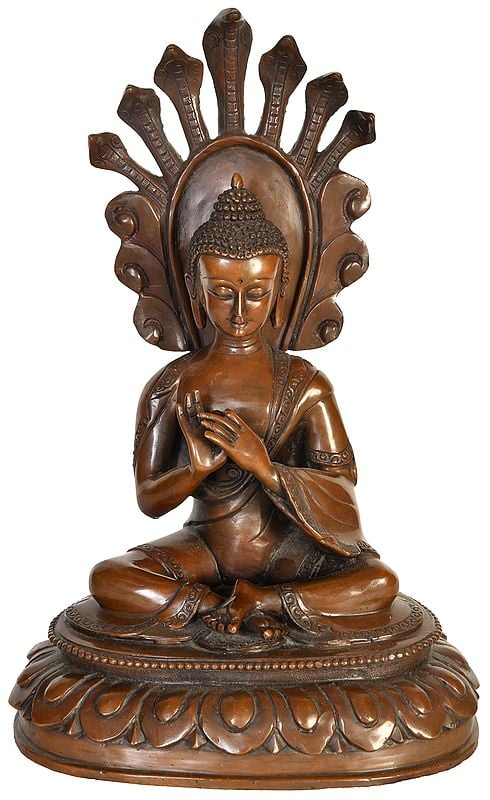 Lord Nagarjuna, The Saint That Emerged From The Serpent Kingdom

$646.75
$995.00  [ 35% off ]
FREE Delivery
Legend has it that upon the renunciation of a great Brahmin-born Buddhist yogi, an invitation came for Him from the serpent-kingdom (naga-rajya) that is said to exist on the ocean bed. It is there that the great Prajnaparamita Sootras were revealed to Him. He returned to the world with that knowledge, upon which He came to be known as Nagarjuna (‘arjuna’ conveys ‘nobility’). Hence, the snake with a multitude of serpents is an integral aspect of the iconography of this Buddhist saint.

Lord Nagarjuna is held second only to the Shakyamuni Buddha, which explains His form as captured in this composition. He is seated in a rudimental bhadrasana, His hands in the dharmachakra mudra. This mudra conveys the quintessential Indian philosophy of the existential vyooha (cycle). From the drape of His robe to the tresses coiled atop His head and the kundalas tugging down at His earlobes, Nagarjuna is the very image of enlightenment. In keeping with the norms of the Nepalese sculptural tradition, the subject is seated on a lotus pedestal. The petals are turned downward, as if drooping from the weight of wisdom-dew. In fact, it is profound wisdom (vivekakhyatiraviplava) that pours forth from His countenance. It is a composure of invincible calm and untramelled bliss. It is a fine example of the region’s devotional handiwork, especially in a select medium such as copper.

Having pioneered the concept of shunyata (nothingness), Guru Nagarjuna was and to this day is a widely sought-after scholar of Mahayana Buddhism. Having founded the Madhyamik school of thought, the Guru's status as a saint and one of the most prominent of Oriental philosophers is undisputed. This curvaceous copper statue, featuring a smooth, lustrous finish, would serve to represent your deep reverence for the Orient.