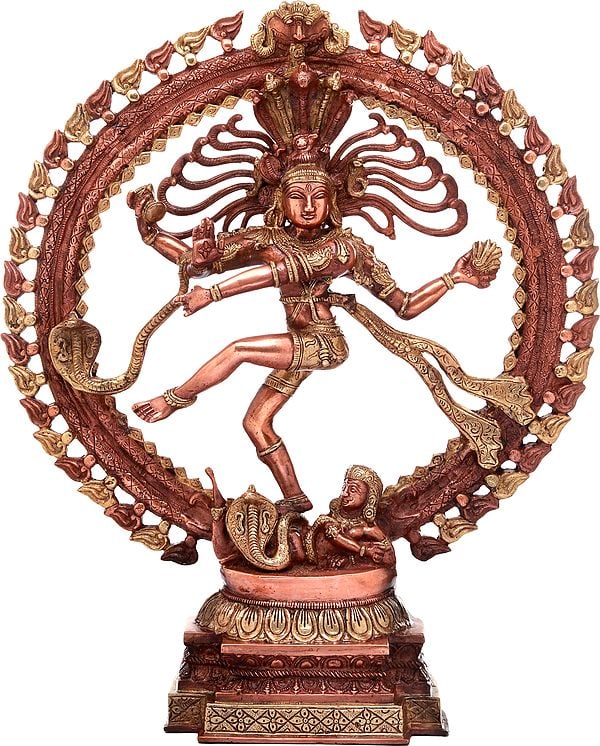 $499.00
FREE Delivery
Bestseller
(Rated 5.0)
The exquisiteness of this Lord Nataraja statue from the Exotic India collection lies in the symmetry between the pedestal and the aureole. The four-tiered pedestal comprises of a layer of distinctly Indian motifs, dual-coloured lotus layers separated by a rope-like structure, and an inverted lotus. From the topmost tier emerges the four concentric aureoles. The innermost circle bears motifs similar to the basest tier of the pedestal, while the outermost circle has gone up in dual-coloured flames.

The lissome physique of the Lord captures the human spiritual imagination with its wondrous beauty. His long slender limbs are poised in great harmony with each other. The posterior arms bear the damru and a flame, symbolic of creation and destruction respectively. He has brought His anterior hands together in the signature Nataraja dance posture, which is complemented by His one leg balanced firmly on the hip of the dwarf and the other raised high in the air. In this classic Indian iconography, the dwarf, indicative of the ignorance that pervades the human realm, is held down by a fiercely hooded snake.

The dancing Lord's locks fly by the side of His head as the tandava progresses. The five-hooded serpent bares its fangs atop His head. The sheer number of snakes in this composition would stun all who gaze upon it - one coiled around His temple, another sitting on the flayed locks, another emerging from the mudra of His hands, probably to add symmetry to the sash that is flying on the other side of His torso. It is in His divine tresses that Gangaji, His wife, resides. The whole composition is topped by Kirtimukha carved on to the highest point of the aureole, a Rahu tamed by the ardour of Lord Shiva.