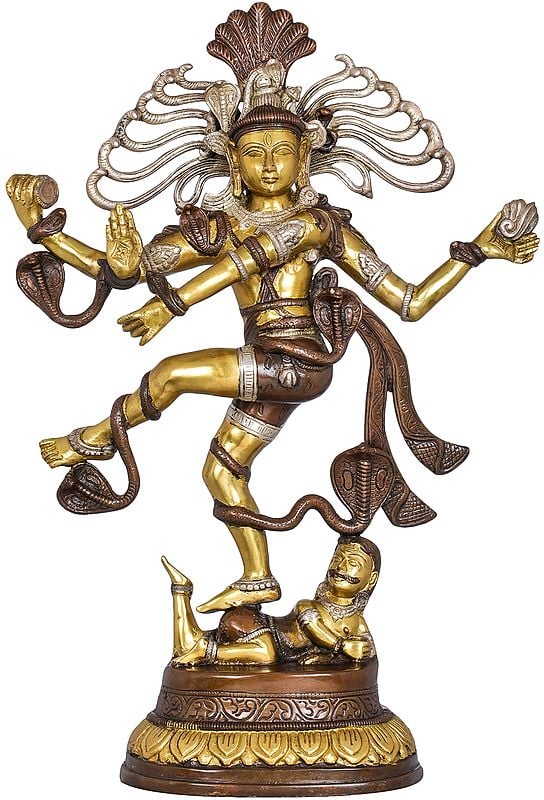 $429.00
FREE Delivery
(Rated 5.0)
The most striking feature of this Nataraja sculpture is the set of locks that are flowing wildly by the side of Shivaji's head. Caused by the vigorous motions of His tandava, His tresses are held back from His face by the snake that is coiled round His temple. The composure of His divine countenance is grave and focussed, replete with the third eye, and flanked by the long ears symbolic of wisdom in Indian iconography.

His majestic form is clad in a body-hugging shirt that transitions into a short dhoti, leaving the musculature of His flexing limbs. The thick, silken sash wound around His small waist cascades by His side. Note the curvaceous patterns etched along the surface of the same. Another snake sits coiled round His waist. Indeed snakes are an integral part of this Nataraja composition - they sit at His thighs and legs and arms, each of them ferociously hooded.

In His posterior arms Shivaji bears a damru and a flame of fire, indicative of the creation and destruction processes respectively. Panini's sootras are said to have emerged from His damru, which is why they are also known as Maheshvara Sootras. His anterior arms, together with the leg raised high in the air, are in the quintessential mudra of His divine dance. The pedestal atop which Shivaji dances is of note. With lotus petals and the divine syllable carved onto its surface, a dwarf lies flat on it. The dwarf is indicative of worldly ignorance and Shivaji dances upon it, indicative of its humiliation.