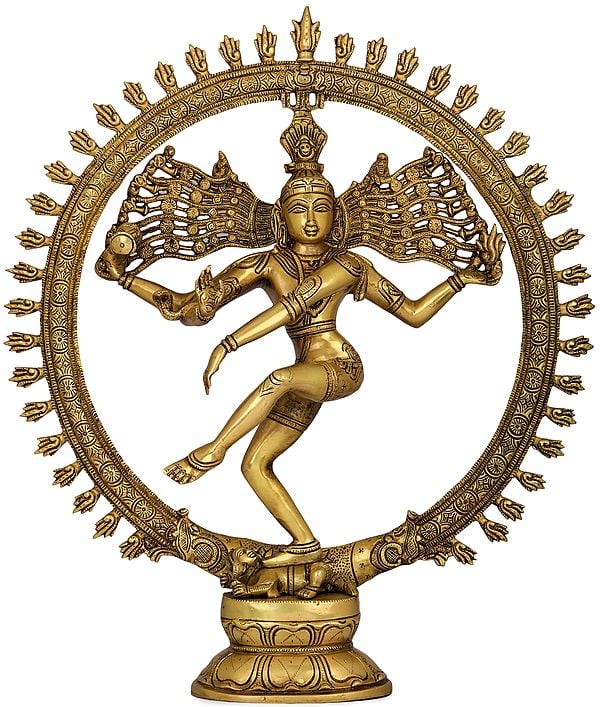 Nataraja is a depiction of Hindu god Shiva and represents the ananda tattva (bliss) which the whole world is longing for. He is the divine dancer performing Tandavam encircled in a cosmic ring of flames or prabha mandala etched extensively in stylized patterns, placed on a double lotus pedestal of a simple and elegant design. This unusually styled sculpture spreads its vibes of spirituality and aesthetics. Shiva stands on one leg suppressing the dwarf demon, Apasmara, personifying ignorance.

The sleek body and sharp curves are a representation of his flexibility and the lavish ornaments decorating his body, accentuate the beauty of this marvelous brass statue. The anterior hands are postured in their iconic pose with the right hand in abhaya mudra and left hand is bent downwards with the palm facing down representing tirodhana or concealment. The cobra coiled around his right hand shows Shiva’s control over evil for devotees to follow the path of righteousness of dharma. The posterior hands hold cosmic fire and damru symbolizing creation and destruction and control on time respectively.

Shiva in this form has his hair decorated and strands flying heavily on either side as a result of his fierce and energetic dance; river Ganges, personified as a Goddess, resides on his matted hair identifying him as Gangadhara.