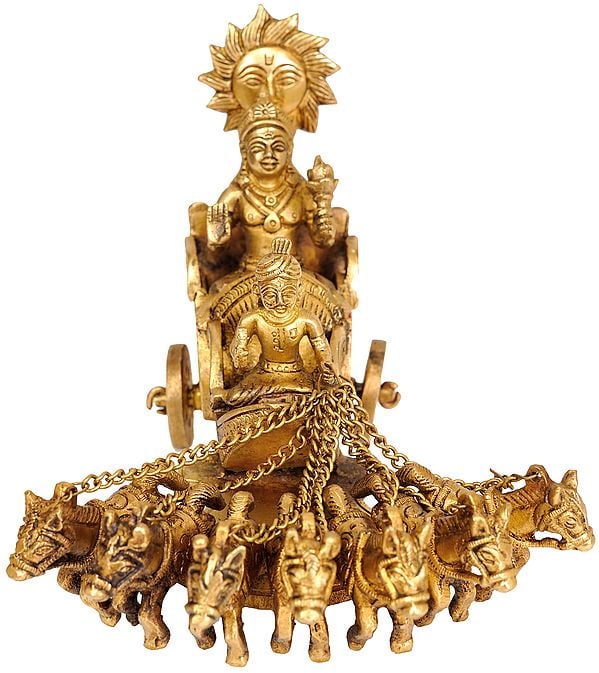 $148.00
FREE Delivery
Bestseller
While the sun-god in most cultures is revered to have created the sun itself, the Soorya Devata of India is the presiding deity over the sun. He has not created the sun, but is Himself a projection of the brilliance and potence of the sun. It is to Him that devotees turn whilst in need of the sun to have mercy on them. Lord Soorya has been described in the Puranas to have a striking iconography - a chariot drawn by seven powerful horses and a great deal of personal splendour - which has been captured with great skill in the murti that you see on this page.

The seven horses of Lord Soorya stand for the seven meters of Sanskrt prosody, which are Gayatri, Brihati, Ushnih, Jagati, Trishtubha, Anushtubha, and Pankti. Aruna, His charioteer, gathers in His hands the reins to all of their necks. The Lord Himself is dvibhujadhari, possessed of (‘dhari’) two (‘dvi’) arms (‘bhuja’), in one of which He holds a radiant golden lotus. This chhavi (image) is in keeping with His iconography as expounded in the Brhat Samhita. An image of the sun itself, with a countenance engraved into its circular form, constitutes the halo behind the crown of Lord Soorya.