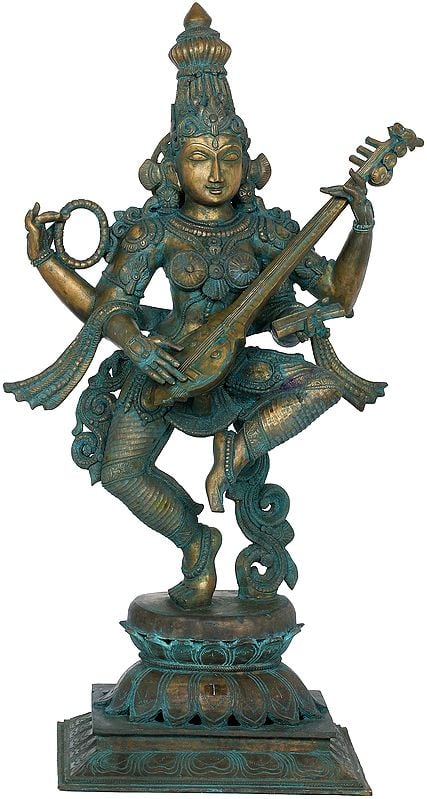 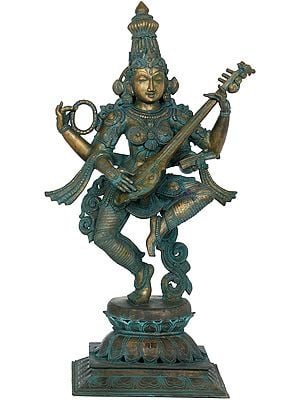 $2595.00
She leaps into the air as Her veena exudes music. Her hips are jutted out, Her delicate anklet-adorned feet in mid-air. She is chaturbhujadhari (four-armed), one of which holds a pothi to indicate Her learning. Her silks and shringar flow about Her as She motions. She is gracious, Her form cast in superlative proportions of the feminine. This dynamic composition is of none other than the Devi Sarasvati, wife of Lord Brahma, presider over learning and the arts (which are a prerequisite to the process of creation, over which He presides). Her name means "one that flows", and indeed learning and art flow from Her like the pristine Northern river named after Her.

The medium captures the Devi's gorgeousness to perfection. An elite medium to work with, bronze has flourished in the hands of Southern sculptors since the Pallava and especially the Chola ruling periods. Today, South India is the home of bronze where the best of contemporary examples of India's great sculptural tradition are put together. Not only does this take a significant degree of skill to work with bronze to produce something like this, but also this composition has been suffused with the artisan's personal devotion. Note the sthirsnigdha composure of countenance, the towering crown that sets off Her stature, and the beauteous angulature of Her limbs. From the vines that frame Her form to the layered lotus pedestal, it bears the hallmark of Southern workmanship.