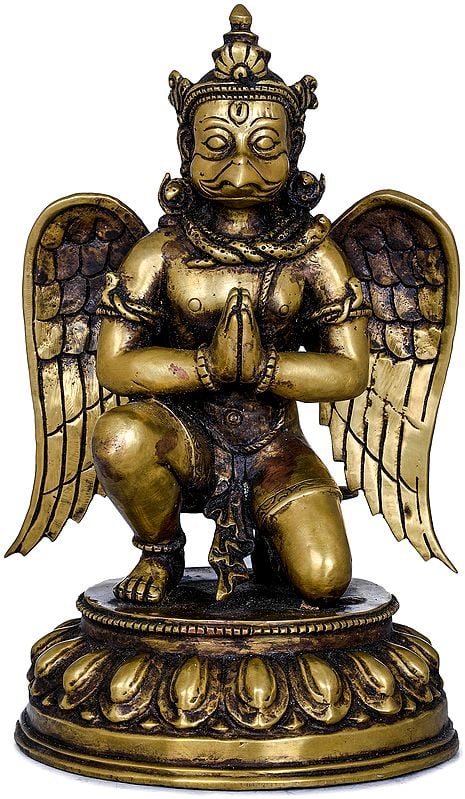 $399.00
The evolution of Lord Garuda in Indian art is an interesting one. As the vahana (mount) of the great Deva Vishnu, He is observed to have been shedding His aquiline characteristics towards a form that is more human than eagle. The sculpture you see on this page has been handpicked for the balance that the artisan has struck up between eagle and human, making for an image that is at once powerful and relatable.

Clad in a loincloth, His shringar comprises of a bunch of snakes (He is considered the archenemy of death, of which the snake is a symbol). In fact, He is called Nagantaka, the devourer of snakes. According to Indian mythology, it stems from the acrimony between His mother, Vinata, and Kadru, Her sister/co-wife and the serpent-queen. He is seated with a knee touching the grand lotus pedestal, His hands folded in all humility in the Namaskaram mudra. The dark burnished finish on the insides of His wings add to the beauty of His imposing wings. From the macrostructure of the same to the plumage and stance, they have been sculpted with a great deal of skill and imagination, the kind that stems from the heart of the Vishnu devotee. From the raw lines that make up the countenance to the rugged texture of the overall composition, the primal strength of Lord Garuda has been conveyed well in this workl