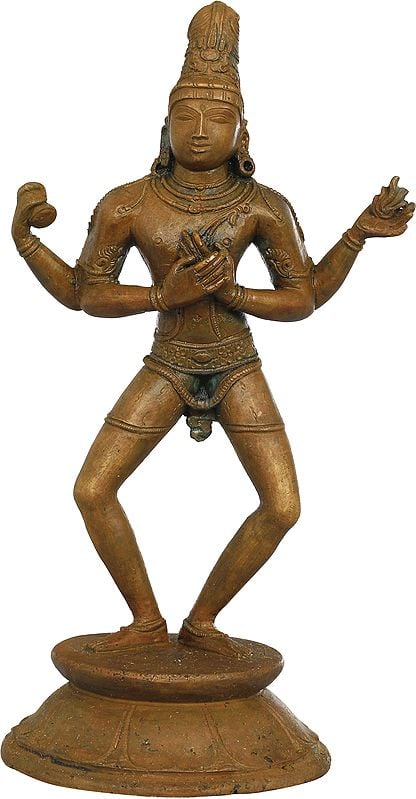 $446.25
$595.00  [ 25% off ]
FREE Delivery
A handsome bronze of the cosmic annihilator. Upon an upturned lotus He stands, His lean legs bent at the knees, anterior hands clasped upon the heart. The sculpture that you see on this page is an image of nrtya Shiva, or the dancing Lord Shiva. He is the founder of the classical performing arts (natya) and divine author of the definitive scripture (shastras) on the same (natya shastras).

He is tall and sinewy and broad-shouldered. He has nothing but adornments on His person; in fact, almost nothing by way of clothing. It is His formidable starkness that is the predominant theme of this composition. Necklaces layered over the clavicles that define His wide-set shoulders. A face that is serene and handsome, flanked by karnakundalas. A semblance of the third organ of vision, directly above which is the rim of a tall tapering crown.

Nrtya Lord Shiva is chaturbhujadhari, or possessed of (‘dhari’) four (‘chatur’) arms (‘bhuja’). A damroo in the right hand, a flame in the other. From the former emanates the naada of existential projection, while the latter serves to engulf all in its destructive fervour. In this light, the role of Lord Shiva as the omnipotent destroyer is as integral to life as the other two entities of the Hindu trinity.