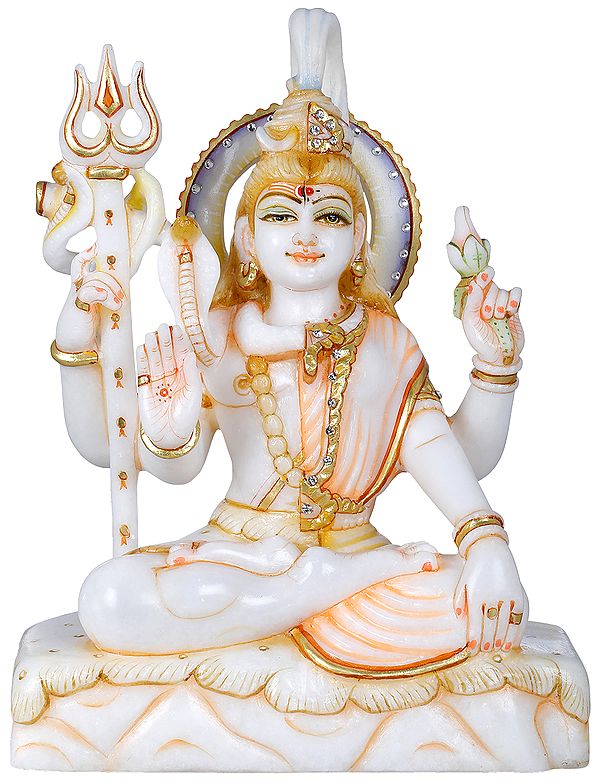 $995
The Ardhanarishvara figure is unique to the Hindu pantheon. It is a composite Shiva-Parvati deity, a confluence of the masculine and the feminine. In Sankhyadarshana, the root of Indian philosophy, the masculine stands for the energy principle (purusha) and the feminine for the matter principle (prakrti). A harmonious union of the two, in the form of Ardhanarishvara, stands for the entire matrix of srhsti (creative projection) as we know it (drshyam).

The marble-sculpted Ardhanarishvara that you see on this page is an exceptional composition. The deity is usually portrayed as standing, which often conveys the contrast between His tandava and Her lasya. This seated Ardhanrishvara depicts the coming together of the first yoga-guru, Lord Adinath, and the first yoga-shishya, Devi Parvati. Note the signature padmasana of their stance - upturned heels gathered in a straight line below the navel and the knees-and-hip trifecta resting on the ground.

Lord Adinath holds a trishool with a damroo attached to it and raises another hand in blessing. Devi Parvati rests one of Her fair hands on the knee and raises a lotus-bud in the other. From the coils of their twin bun emerges the fluid Devi Ganga over their ashen purple halo. In addition to the padmasana, these are the elements of the unusual iconography of this Ardhanarishvara.