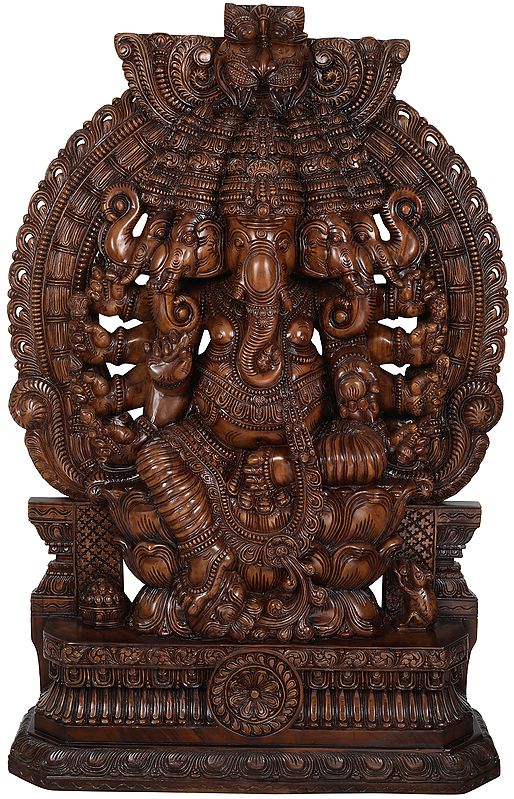 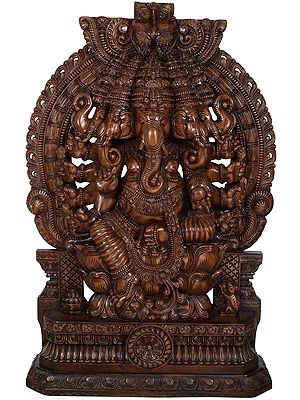 $4995.00
A rare iconography of the popular Lord Ganesha. Usually depicted in His baala-roopa (child-manifestation), He is the adorably chubby child of Lord Shiva and Devi Parvati, bearer of the qualities of innocence and childlike wisdom. However, the iconography of Lord Ganesha that you see on this page has more to do with His warrior lineage than with the child in Him. He is the panchamukhi (five-faced) deity, each of His mukhas radiant with determination and invincibility.

This panchamukha Lord Ganesha murti has been sculpted from pure, homegrown wood. In addition to the five elephant heads, He is possessed of (‘dhari’) ten (‘dasha’) arms (‘bhuja’); like His mother the ferocious Devi Durga, He is dashabhujadhari, each of His bhujas wielding a weapon to ward of adharma. He is clad in a dhoti and a world of shringar, which adds a considerable proportion of detail to the already complex composition. Zoom in each aspect of the same to appreciate the detail with which it has been executed.

A throne formed of numerous lotus pedestals, each of them carved such as to convey an undeniable quivering motion. A little mouse, the vahana, raises its arms to its Lord on one side, a bowlful of laddoos sits on the other. The throne of Lord Ganesha lies on a traditionally carved pedestal, upon which are a pair of stunted yet richly engraved pillars. A glamorous aureole surrounds the central lalitasana figure, whose five crowns seem to merge into the jawless infinitude of the mouth of the Kirtimukham.