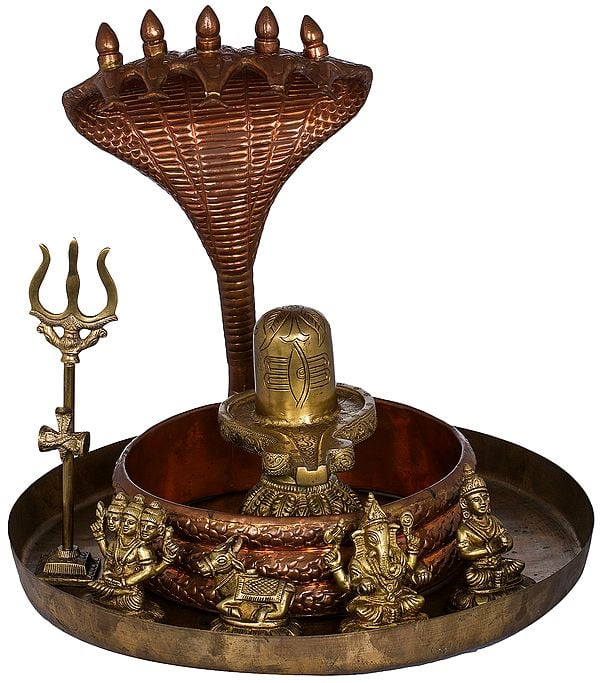 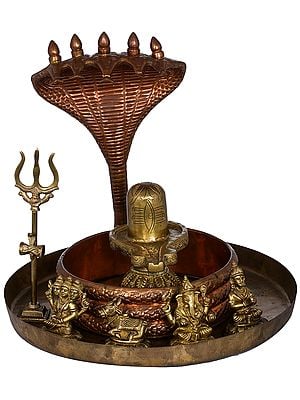 $399.00
The whole Abhishek set is in its crowning beauty. The amazing Five-hooded Vasuki Snake in kundalini (coiled ) Pose hanging over and around the Shivalinga is in copper, Shiva Linga and all other parts of the set are in glittering Brass.The thick brassThali in which all the Abhishek vessels including Shivaling & attractive deity- idols are placed is wonderful. Ganesha with Divya Yantras and Modaks in both the hands, three-headed Kartikeya with four hands, Mata Parvathi, and NandiKeshwara(Bull) are sitting in meditation Pose. The bull is depicted as a symbol of dharma (righteousness).The serpent symbolizes alertness.

The unique Shiva Ling, in its cylindrical shape over the beautifully carved Yoni base -an emblem of the goddess- is representing its iconic attributes in a wonderous manner being: The Tripund tilak, The Third Eye (symbolizes alertness, knowledge and wisdom) and Bilvapatras incredibly carved with an aesthetic look on the Ling. The bilvapatra is trifoliate which symbolizes the trinity i.e. Lords Brahma, Vishnu, and Shiva. It is also said to represent the trinetra of lord Shiva. A Trishul with Stand and Damru ( with a snake clung over it ) is enticing and wonderful. Trishul signifies the creation, maintenance, and destruction. Damru symbolizes the Universe which is always expanding and collapsing.

Lord Shiva is also called Mahadeva or the Great God,( G for generator, O for operator and D for Destroyer ). In Hindu temples, an embodiment of Shiva is often placed prominently at the altar in a form or avatar known as the lingam. Due to the drinking of Halahala poison by Lord Shiva, water/milk /other sacred liquid is poured on the Shivalinga as a symbol to calm and relieve His body. Show your wavering devotion to Lord Shiva by keeping this adorable, handy shivalinga abhishek set in your worship room.