The statue is a magnificent innovation of the Krishna and Kaliya legend as it occurs in Srimad Bhagvat Purana. Kaliya was a huge serpent of Pannaga species of the Kadraweya clan. Initially Kaliya had its seat at Ramanaka Island where it was often attacked by Garuna, the bird which served Vishnu as his vehicle. For appeasing Garuna Kaliya sent him food on full moon day of every month. Once it consumed Garuna's share, which enraged Garuna and it attacked Kaliya. The serpent fled from the Ramanaka Island and sheltered itself in Yamuna. Under a curse from Saubhari Garuna could not invade Yamuna. Kaliya was highly venomous. By the venom it emitted with its breaths it turned Yamuna's water into poison and whosoever, the man or animal, drank it instantly died.

One day Lord Krishna, when he was a little more than six years of age, wandered towards Kaliyadah, the section of Yamuna where Kaliya had its seat. With his flute in hand he climbed a tree beside Kaliyadah and before his mates could notice, he jumped into the river. It broke the deadly quietude of Kaliyadah, which infuriated Kaliya. It consequently attacked Lord Krishna and caught him in its massive coil. Hearing of the mishap Nanda, Yashoda and the entire village population rushed to the spot. Balarama, Krishna's elder brother, began boosting Krishna's morale. He began expanding his body rendering it impossible for Kaliya to hold him any more. After Kaliya lost its grip over Krishna's person, Lord Krishna jumped and positioned himself on Kaliya's head which consisted of five hoods. Krishna began on Kaliya's hoods his cosmic dance and with the beats of his legs subdued the serpent. Krishna would not let Kaliya go but only after its wife's prayers and Kaliya's own promise to never harm anyone and to retire back to Ramanaka Island. Lord Krishna did the serpent one more favour. He marked on its hoods the imprints of his feet and blessed it to be fearless for its only enemy Garuda, after it saw the imprints of its Master's feet on Kaliya's hoods, would not attack the serpent.

This bronze representation of the legend makes departure from this scriptural tradition. It seems to be a mix of Kaliya legend and Shaivite cult where serpents served Lord Shiva as garlands and sashes. The massive size of the creature and its horse-demon like mouth, though not consisting of five hoods as described in texts, correspond, however, with none else but Kaliya of the Krishna cult. Instead on the hoods of the serpent Lord Krishna stands on a lotus pedestal. The animal is holding Lord Krishna in its coils but only like a long sash lying around his shoulders and arms. Lord Krishna is not in a posture of dance. He is rather in his best known 'tri-bhanga mudra', that is, a posture with three curves. The serpent, as it appears from its demeanour, has been subdued but not by the beats of dancing legs but rather by the magic of his flute.

The statue is a fine piece of iconographic art. It is finely carved, has sharp and expressive features and is beautifully embellished. In many sculptures Lord Krishna is seen mounting Kaliya's hoods. Such statues, rising vertically, lose proportion and balance. This statue is far superior in figurative grace and proportions. It has wider scope for representing the mind of both, Lord Krishna and the demonous Kaliya. The peacock feather motif has been beautifully repeated on waist. Alike the figure of Kaliya has been used artistically for enhancing the sense of the width and overall proportion. .

This description by Prof. P.C. Jain and Dr. Dalj 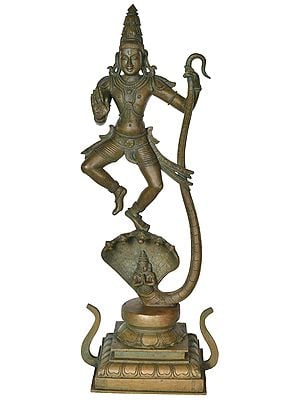 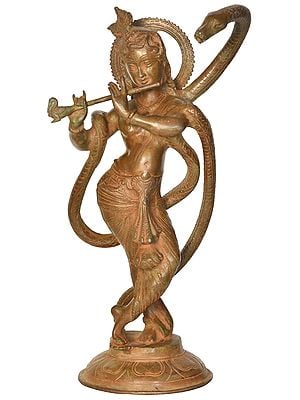 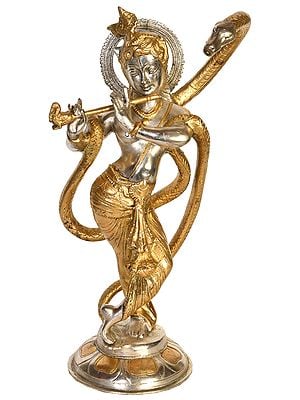 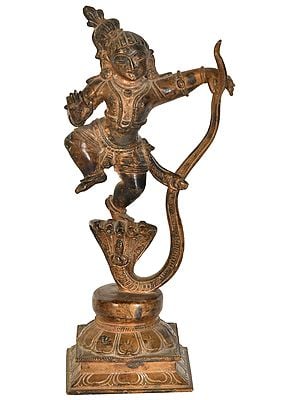 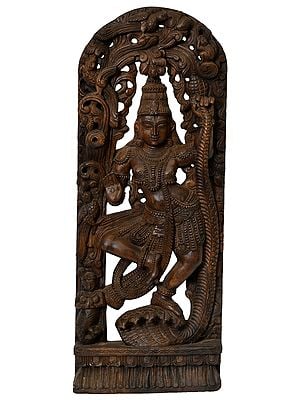 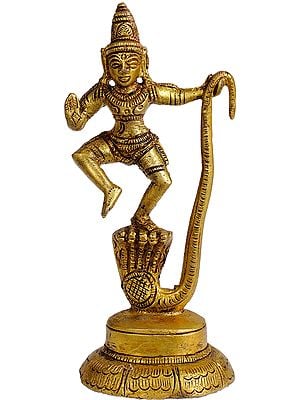 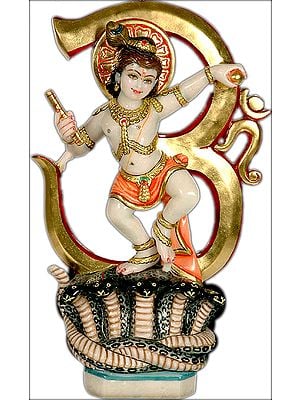 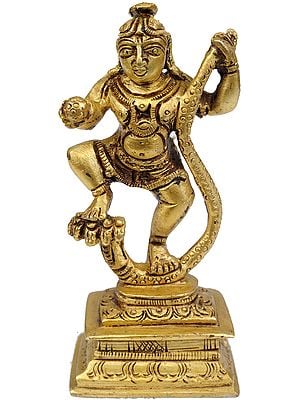 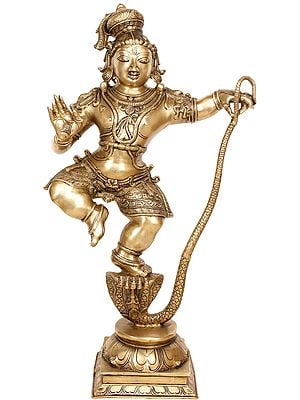 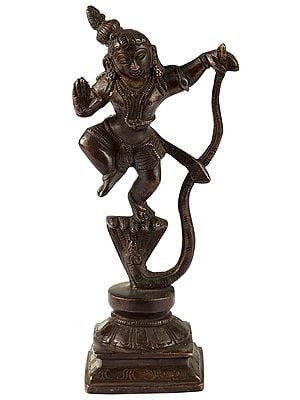 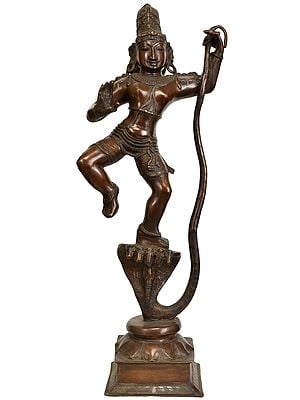 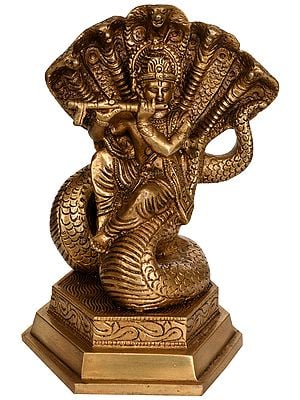 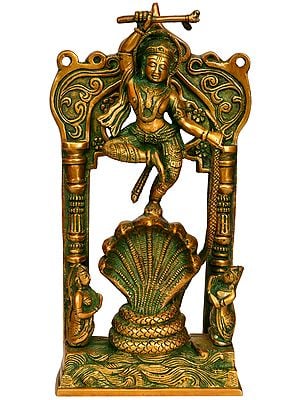