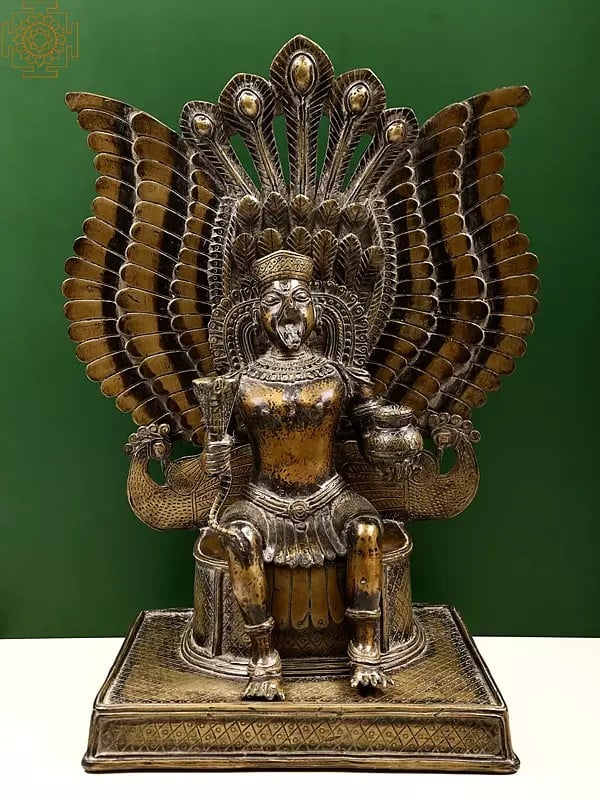 $1495.00
This Statue is Exclusively Made with Lost-Wax Casting Process

This large mythical bird is a representation of birth and heaven and an enemy of snakes, carrying amalgamated features of an eagle and human. Here it sits on a large stylized throne crowned with long and fancy peacock feathers and two peacock torsos heading out at the seat from either side. Garuda is the vahana of Lord Vishnu and appears in both Hindu and Buddhist mythology.

It is carved here in its traditional iconography of torso and arms of a man and wings, head, beak and talons of an eagle. It is also known as the ‘King of Birds’ (Khageswara) with beautiful feathers. Have a look at the giant feathers of this sculpture, chiselled in a distinctive three-layered pattern that ascends downward and fashionably separated by thin vertical stripes with blunt edges. Its fearsome look can be identified by the carvings of its open beak and the expression of eyes; garbed in a knee length dhoti and a long double layered kamarband and lavishly ornamented in precious jewels and a small crown that fits its head. Garuda holds an amrit kalash and a serpent in his hands.

Apart from the realistic iconography, the most awe-struck aspect of this sculpture is the way it is crafted. It is exclusively made with the lost-wax casting process, in which a duplicate metal sculpture, popularly of gold, silver, brass or bronze is cast from an original sculpture. This method allows to have a replica of the original form including its minutest intricacies and striations. The sculptor has beautifully used the blend of smoky grey and his iconic golden-yellow shade while sculpting this masterpiece.