Superfine Pashupatinath on a Lavish Carved Base of Shiva Family 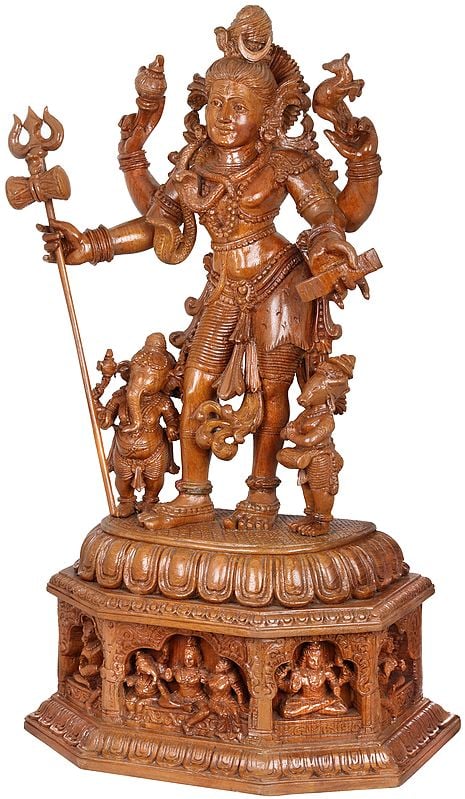 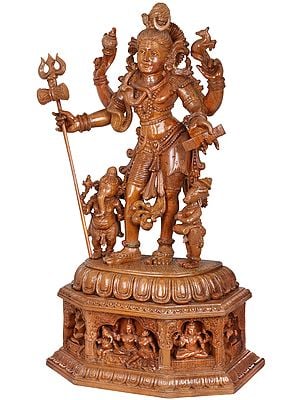 Lord Pashupatinath is an incarnation of Hindu god Shiva who is the most enterprising and industrious god-figure in Indian mythology. Pashupati means ‘Lord of all animals’ and here he is sculpted in a manner such that he aptly justifies his name with the holy cow Nandi. He stands here on a heighted base chiseled in temple niches all around and intense ethnic carvings with a platform of an inverted lotus flower. The pedestal is decorated with Shiva family figures of the Lord himself, Parvati ji, Lord Ganesha and Nandi settled in various postures and formed in the most precise carvings.

Lord is garbed in a stylish knee length dhoti and a kamarband that hangs long from the front and sides and is bejeweled in luxurious treasures decorating his neck, ears, hands and legs; two serpents are coiled around his neck representing his nature of fearlessness and power. Chaturbhuja carries a book of knowledge and the symbolic trident and damru in his anterior hands, while the posterior hands hold a deer representing firmness of mind and god’s role as the Lord of animals and axe respectively.

Pashupatinath is accompanied with Nandi standing on the left side with the hands joined in obeisance and his son, Ganesha standing on the right holding all his characteristic weapons and attributes. This statue is carved in the finest quality wood by expert artisans from South India; it’s glowy and smooth texture highlights each and every expression of his face in the most decent ways. The long matted hair are ornated with a crescent moon, serpent coiled around it and the river Ganga flowing out from the top. The flower aureole at the back of his head glorifies his divine persona.