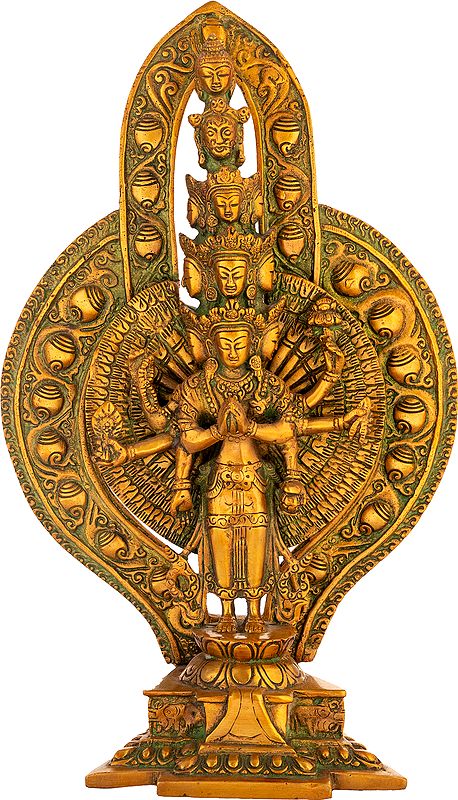 $245
Quantity
Notify me when this item is available

There are several versions of the legend explaining his eleven heads, but they all resolve themselves into the following:

Avalokiteshvara, the all pitying one, descended into hell, converted the wicked, liberated them, and conducted them to Sukhavati, the paradise of his spiritual father, Amitabha.

He discovered, however, to his dismay, that for every culprit converted and liberated, another instantly took his place. Legend claims that his head split into ten pieces from grief and despair on discovering the extent of wickedness in the world, and the utter hopelessness of saving all mankind. Amitabha caused each piece to become a head, and placed the heads on the body of his spiritual son, Avalokitesvara. Nine of the heads have benign faces and are depicted in three rows; the tenth has an angry face, while the head at the top is that of Amitabha.

All the heads, except that of Amitabha, is crowned. In contrast to the floral crowns of the three rows of heads, the top wrathful head is adorned with a crown of skulls.

At a symbolic level, eight of the heads represent the cardinal directions and their intermediate points, and the other three signify the zenith, the center, and the nadir.

Fascinating as this myth is, it probably disguises an earlier myth of cosmic creation in which a primal being created the universe by disintegrating his own person.

Amitabha further said to Avalokiteshvara that there was still another way to accomplish his goal. Mahakala, the wrathful aspect of Avalokiteshvara, was then created to fight against negative forces with compassion and to destroy obstacles in the path towards righteousness, thereby helping all sentient beings reach enlightenment. The tenth wrathful head is thus that of Mahakala.

In addition Avalokiteshvara is given a thousand arms, which form a mandala around his body and symbolize his pervasiveness. The palm of each hand is marked with an eye, the 'eye of mercy', to see the sufferings of all beings, and to help sentient beings overcome them.

The Bodhisattva Ideal: Buddhism and the Aesthetics of Selflessness (Article)

Product FAQs
Add a review
Have A Question