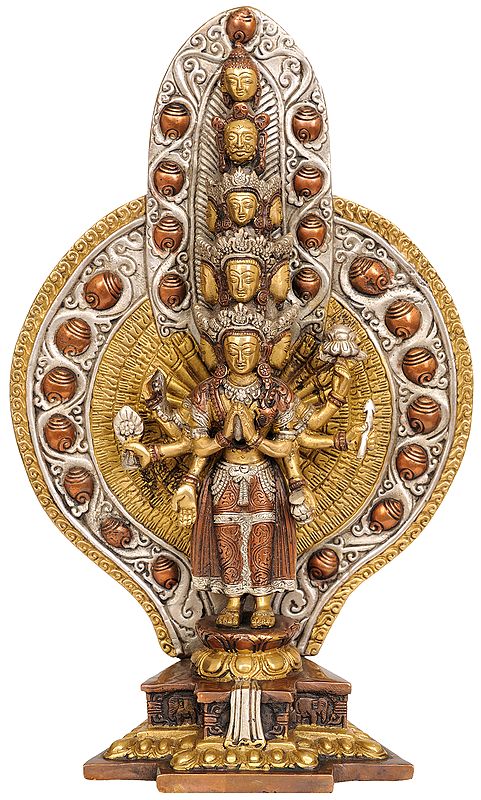 A thousand arms of Lokeshvara are all extended, forming a fan-like structure of nine concentric rings. The first circle has twenty primary arms, with his two main right and left hands making the varada-mudra of extreme generosity and grasping an open white lotus stem, while his other eighteen hands carry white lotus buds. Except for his second right hand, which produces the downward-facing abhaya-mudra of protection, all of these eighteen bud-holding hands point upwards.

Standing Lord Avalokiteshvara is surrounded by a striking gold and cooper aureole with foliate motifs. Lord Avalokiteshvara is the most widely loved of the Mahayana Bodhisattvas. He is the epitome of compassion, the very image of the strength and succour sought by those caught up in the tribulations of worldliness. A work of art as fine as the idea is sacred, it comes with rich engravings along the width of the aureole. The same emerges from a pedestal of gleaming lotus petals. The Statue of multitudinous limbs and heads of the Bodhisattva is a perfectly symmetrical number and serves to build the impression of a temple around him as he stands on copper and gold-like stupa.