Tibetan Buddhist The Unfailing Healer of the Ills of Samsara

$300.00
Usually ships in 10 days
Notify me when this item is available
Save to Wishlist Send as E-card Share by Email
The Medicine Buddha or Bhaishajyaguru, has been represented in various mediums of art in various ways. Here he has been depicted seated in vajraparyankasana on a lotus throne. His right hand is in the gesture of varada (charity) and bearing the stem of the myrobalan, a medicinal plant. His left hand is resigned on his lap in the gesture of meditation. The almost closed eyes of Bhaishajyaguru indicate deep meditation. His lips are upturned, and earlobes elongated. The neck has three folds (trivali). The hair, painted in a blue colour, is arranged in curls with prominent ushanisha. There is a jewel on the top of the head. The body is slim and proportioned. The facial expression conveys compassion, peace and serenity. His slightly heavy monastic garment, covering the left shoulder only, has been incised with medicinal plants and flowers that continue even on the reverse of the sculpture (see accompanying image). The border of the drapery is incised with stylized designs. The lotus throne has eleven lotus petals that do not go all around the back; however, the rear portion of the throne depicts the auspicious mantra in the praise of Manla or Medicine-Buddha in a late Tibetan letter.

The cult of the Medicine or Healing Buddha is much popular in Tibet, China and Japan. He is the physician of human passions, and the unfailing healer of the ills of samsara. According to a tradition, for the sake of lay patients and sick disciples, the Buddha appeared as Bhaisajyaguru and taught Rgud-bzhi (Science of Medicine) at Sudarshana, in Sanskrit. Sudarshana is Indra's palace on Mount Sumeru. The Buddha stayed here for four years in the medicine forest. The Buddha created this forest with a mountain plateau on which he manifested Sudarshana. Various Devas, Sages, Buddhists and non-Buddhists surrounded him. To turned the wheel of medicinal science, he became Bhaishajyaguru and attained the Samadhi called 'expelling 404 diseases." Bhaishajyaguru is said to dispense spiritual medicine when properly worshipped.

A. Waddell, Buddhism and Lamaism of Tibet, Delhi, 1979 (reprint)

Click Here to View the Reverse of the Statue 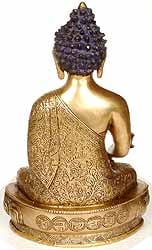