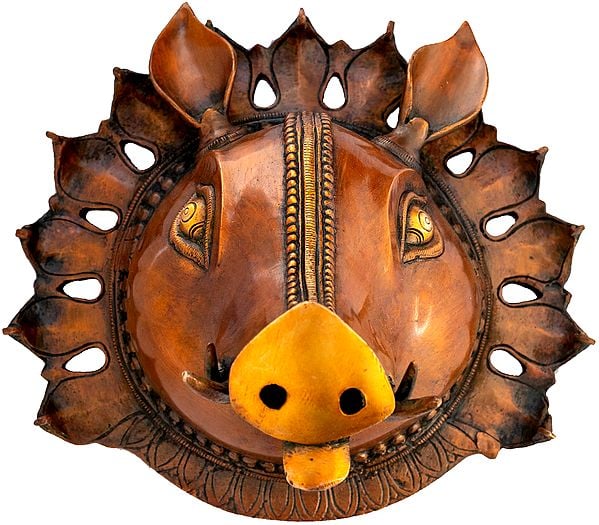 The third of the ten principal avataras, Lord Varaha is a relatively little-known incarnation of Lord Vishnu. Myth has it that Lord Varaha charged straight into the infinite primordial ocean and rescued Bhoodevi, where She was held captive by the evil King Hiranyakashipu. In other words this Vishnu-avatara is responsible for having restored the Devi to Her rightful place in triloka (composite realms of existence).

The sculpture that you see on this page is a mask of Varaha designed as a wall-hanging. The name of this incarnation references the Sanskrt word for pig, ‘varaha’. Lord Varaha has the head of a pig, which has been carved in expressive detail. That characteristic shape of the cheeks,  and deep-set eyes on either side of the head. The frontally curving snout flanked by a pair of sharp, slender tusks on each side. The hint of tongue protruding from under the flared nostrils.

A halo frames the head of Varaha. It comprises a circular series of motifs whose individual silhouette lies between the ears of a pig and a lotus petal. The ears themselves on the top of the Lord’s head have a lifelike curvature. The super-smooth, highly lustrous colour gradient of the composition adds to this quality.