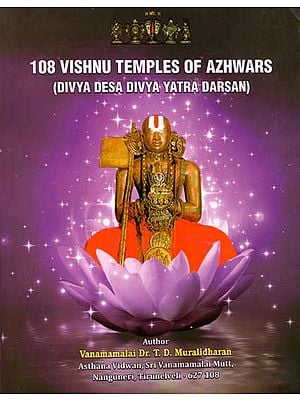 108 temple of Azhwars , The earliest among the devotee of lord Vishnu were the saints of tamil region known as Azhwars. The Azhwars are known as Divya Suris and their works are Known Divya Prabandham. The Shrines Sancitifed by them are known as Divya Desas. Special grace of Lord is bestowed in these 108 temples eulogized by Divya Suris . Many including the saint and sages have worshiped the Divya Dreams and the Lord enshirised in these temples and got liberated. This Book is a medium to spread the need for protecting the age old Indian Tradition and the heritage structures. This volume presents a pen picture of Chain of 108 temples and other important Purana kshetras too (Divya Desa Divya atra Darshan) of Our Akhand Bharat Varsham covering a hoary period of time. The Book is made possible by the grace of Bhagawat Sri Ramanuja at every stage….. This is a special edition for 1000 years birth day completion of Bhagawat Sri Ramanuja on the year Hevilambi Chitirai Thrivathirai.

“THE LORDS ”(MAHA VISHNU) Divine Abodes in this worlds are located in our thrice blessed bharth,. They are called 108 Divine Abodes of the 108, We can visit 106 and have the pleasurable experiences of their Direct Darshan. It is certain that If we make a pilgrimage to these abodes or read about them or hear about them , certainly Sriman Narayanan will bestow His grace on us . It is the belief of our wise elders , that for those who have had the Darshan of the 106 abodes in this world , the lord Himself Will Show His grace and lead them to the remaining two Divine Abodes .

1. What are these 108 Divine Abodes? 2. How do they differ from the other Temples? 3. Where are they Located? 4. What are their Specialties?

To Explain these points, the author with the lord’s blessings and seeking the good wishes of the Devout , has created this beautiful multicolor book consisting of brief details of Vishnu temples which were glorified by Azhwars. This Book is brought out on the Special occasion of the Millennium celebrations of Bhagavat Sri Ramanuja in Tamil Calendar year Hevilambi Chitra Thiruvathirai.

“Swami Bhagavat Ramanuja’s Love which always remained focused solely on the lotus feet of lakshmikanta , was something marvelous and he authored the Sri Bhasya . I constantly reflect with devotion on Swami Ramanuja and his incarnation, Swami Manavala Manunigal”.

We are delighted to announce that , by the grace of Divya Suris and Acharyas , to commemorate the celebrations of the millennium of Bhagvat Ramanuja, a special editions has been brought out of the 4000 hymns of azhwars ,(The Divyaprabhadam) and information about Divyadesas’ with Divyadesa Emperumans’ beautiful multi color photographs and the same is being dedicated at the golden feet of Swami Bhagavat Ramanuja. In this year we shall deem ourselves extremely fortunate to witness the celebrations of 1000 years (1017-2017) of Bhagavat Ramanuja.

Shri Ramanuja while writing his commentary (Bhasyam) on Brahma Sutra Frequently refers to Azhwar’s Srisukthis for clarifications . Azhakiya Manavala Perumal Nayanar, in his acharya Hridam , Says “Bhasyakarar Iidu Kondu Sutra Vakyangal orungaviduvar” and the words in the Mangala solka is the proof of that: “Sathakopa Surimatha Tatsuktyabdhimangnasayam” (Immersed in the nectarine ocean of Swami Nammalwar’s works.) Moreover we can understand from the Guruparampara narrative That Ramanuja’s heart was full of hymns of Azhwars and he kept reciting them even during his stroll. In This context an anecdote is cited , in Idu Commentary (T.V.10.8.3): “ Saint Ramauja was having a stroll in the Verandah of the mutt , after a meal , ( bhutva satapadam gacchet – To Walks 100 steps after meals) but abruptly stopped . This was because he was reciting the particular decade of Tiruvajmozhi in which there is line , Referring to the Azhwar’s severance of his age –long association with “Maya” which had kept him in bondage from time immemorial. The saint therefore abrupty stopped strolling and entered the hall. Embar , the enlightened discipline , who was watching this , instantly sized up the situation and asked the saint weather he was reciting , just then, the particular pasurasm (T.V.10.8.3) and the latter affirmed it. I quote “Thirumalirunsolai yaakaathe thiruulanttiklo odukiratha” “enna”; “Aam, appadiye” saind saint Ramanuja . This exemplifies the deep interest of Shri Ramanuja in theworks of Azhwars and therefore it is very appropriate to bring out this edition in his millennium year celebrations by putting together all the 3 Divyas .

The main objective of this edition is to enable readers to develop the ruche or taste in Divyadesas and Divyaprabhandam. By reading , rendering and memorizing the Divyaprabhandam – one can develop bhakti to the lord to the lord and understand the glorious srivaishnava tradition and culture and eagerness to know the inner meaning of our literature by approaching a learned Acharya, in a proper framework of Grantha Kalakshempam in an Acharya- sishya Parmpara and continue to do the Kanikaryas here and hereafter.

Our Sincere thanks are due to smt..Dr. Shreedeepa for her foreword for this special edition Specail thanks are due to Sriman Vankipuram Kirhsnamachari of Chembur , Mumbai -71 for rendering useful advice in brining out this volume. I Must also make a special mention of the help and encouragement given by my parents and my spouse smt. Sudha Valli who is senior Manager , western Railway Printing Press for her technical help and of course our children Mr. Ashok , Print Solutions, Son, Mumbai for his neat layout. Our Special thanks are due to the print process for thei timely help to bring out this edition in time.

I express my gratitude of all the donar’s who helped us to bring out this edition , but for their edition could not have seen the light of the day.

Our sincere thanks are due to lovers Divya Desas , who will buy this book not for their puja room or their personal immense pleasure by enjoying while reading and understanding the subtle tenets of the Tamil Veda of Divya Suris and visiting the Divyadesas for worship.

Srivaishnava Divyadesams or Triupatis are 108 Numbers. Of these 106 are easily accessible and worshiped. The remaining two ,namely Tiruupparkadal and Srivaikuntam are not accessible to mortals . The 106 Divya Deasams are spread out in various parts of Bharatvarsha.All the great Srivaishnava Archa form that they felt all their offerings were accepted to archa . This Archa-Anubhava regards even the pleasures of Sri Vaikunta as Secondary. Thondaradi Podi Azhwar in his “Tirumaalai” Says that he does not want even Indra Loka. The Antaryamitva aspect of the lord in the region of everyone’s heart is like the groundwater, deep inside the earth . The Paratva or the Transcendental form of the lord, ruling the high Heavens, is like the water surging beyond in the periphery and Aniruddha is like the remote milky ocean , not easy to access . The Vibhava or the incarte forms of the lord , like Rama and Krishna are like the swollen rivers whose waters have long ago rolled down to the ocean . All these forms are therefore beyond our reach. The Archa (Idol) worship in temples or houses is comparable to the deep pockets of water in the rivers beds , the blessings of the erstwhile flood waters. Its is cool and refreshing and available at all times . This is the beauty of Archa form of worship. There are 40 archa forms in Chozha Nadu, 22 in Tondai Nadu, 18 in Pandiya Nadu , 13 in Malai Nadu, 2 in Nadu Nadu and 11 in Vada Nadu.

The Philosphy of Visishtadavaita before Sri Ramanuja beras the indelible impression of the great saints and scholars. The Srivaishnavas or those who are follow the Visistadavita school of thought have three important routes i.e.1. the sastic text in Sanskrit (Vedas) 2. The Agams 3. The Hymns of Azhwars , which are in Tamil. But the Position of Srivaishnava renaisence of the Dravidian land a number of sages and scholars contributed these renaisesnace of ththe Dravidhan land , a Number of sages and scholars contributed these Paasramas by their way of approach of the Divine . But the position of Srivaishnava Archyas was not like the others. They were in a position to explain the tenets of Visistadavita with the framework of Vedas and Agamas and the outpourings of the utterances of Azhwars and Ramanuja was not an exception. 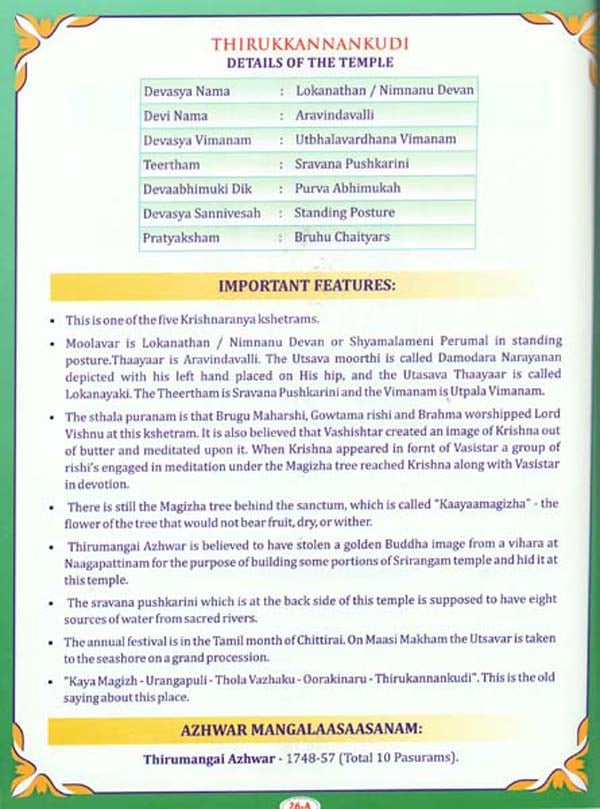 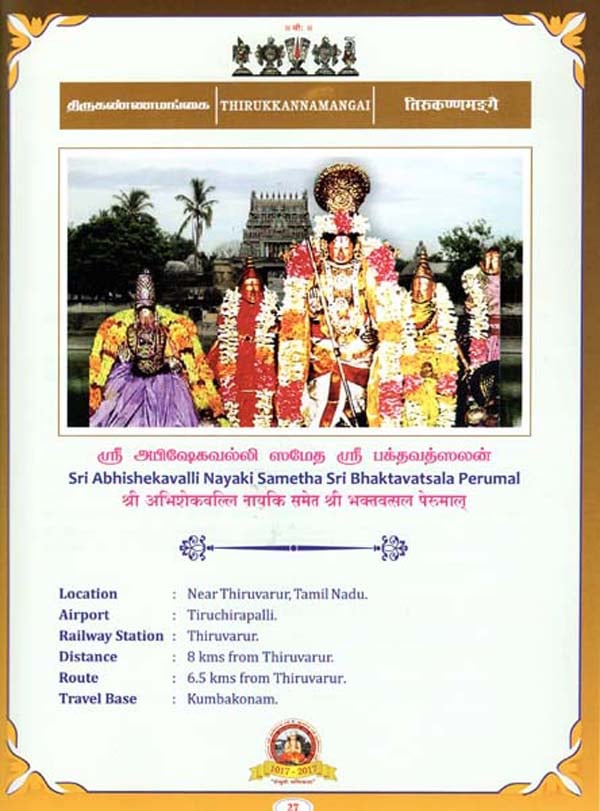 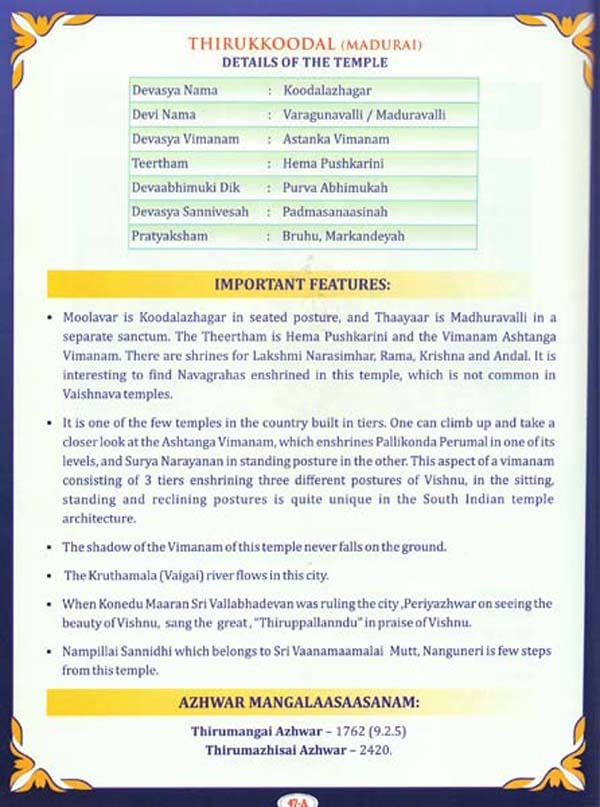 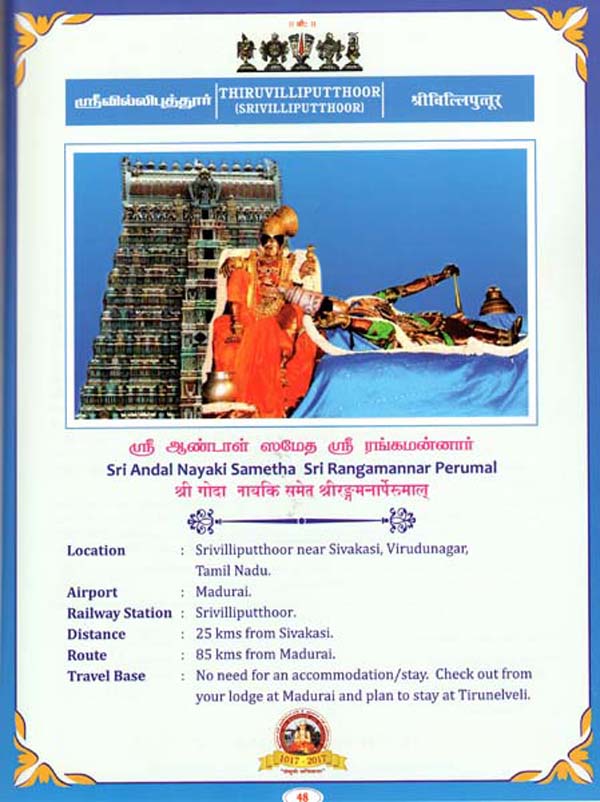 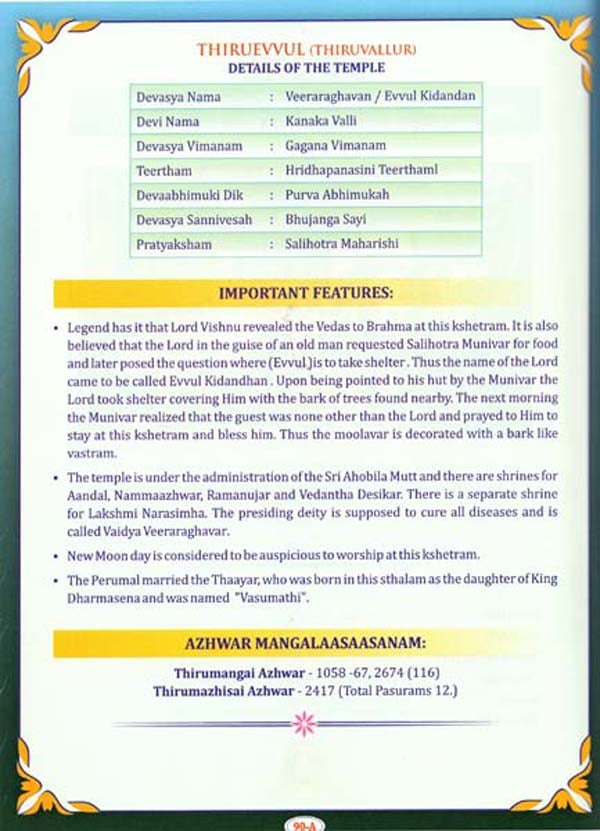 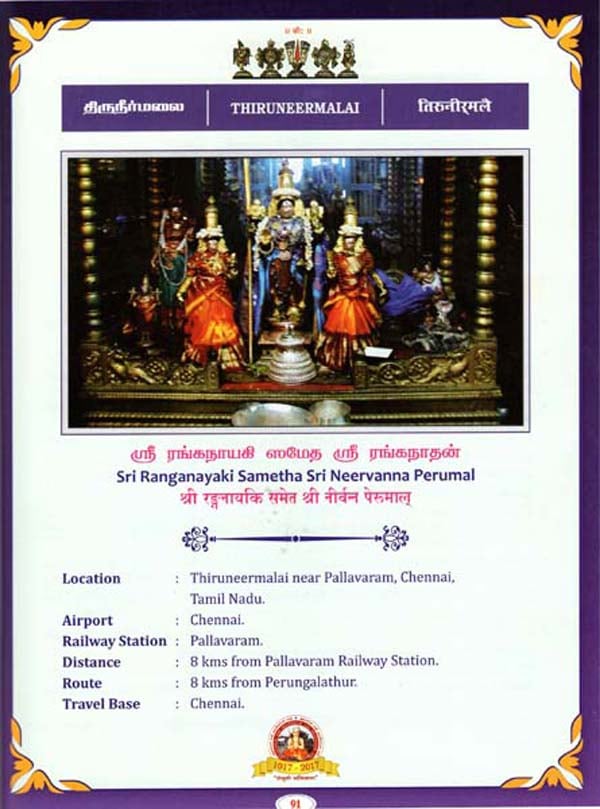