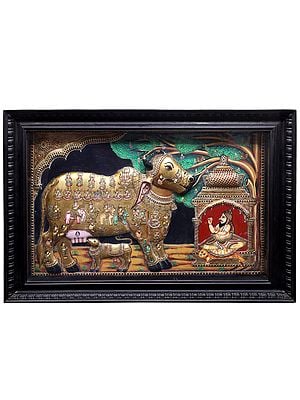 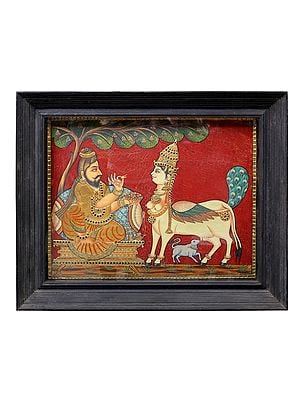 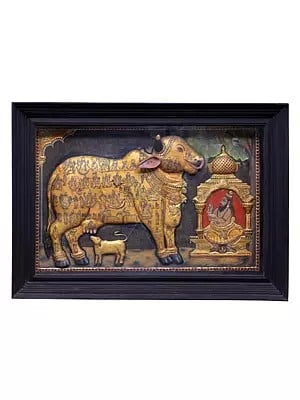 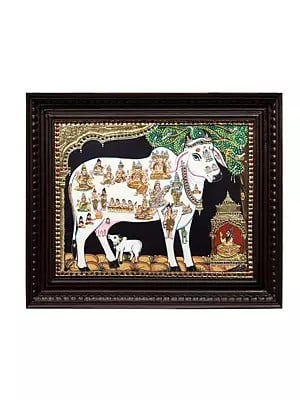 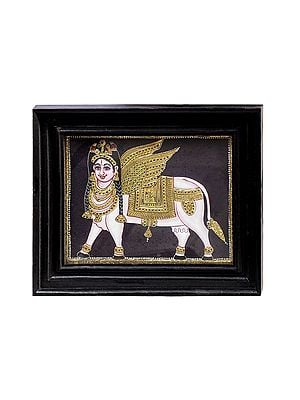 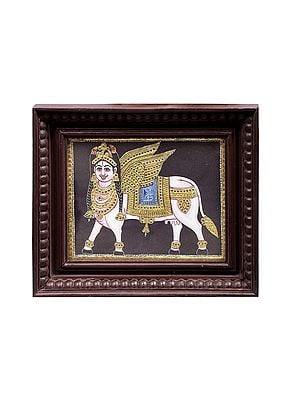 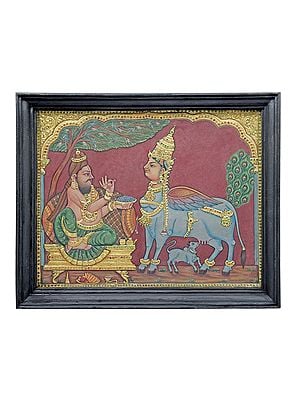 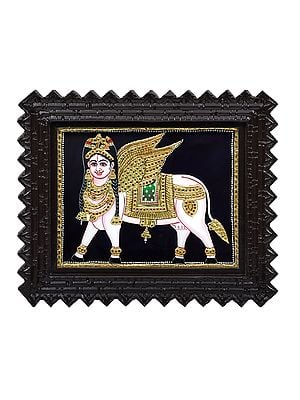 A divine bovine goddess, the mother of all cows, Kamadhenu

She is often referred to as Surabhi, a heavenly bovine goddess who appears in Vedic texts. She frequently serves as both a magical "cow of abundance" who gives her owner anything he asks for, as well as the mother of the eleven Rudras. Her imagery is that of a white, pristine cow who is the abode of numerous deities. Hinduism venerates all cows as the earthly manifestation of the Kamadhenu. As a result, Kamadhenu is not worshiped separately from other goddesses, nor are temples constructed in her honor; rather, she is honored by the respect for cows that is shared by all observant Indians. Indian culture revolves around the sacred cow known as Kamadhenu, which satisfies all desires and aspirations. This heavenly cow came into existence during the furious churning of the ocean by the gods and demons. It was delivered by the gods to the seven sages, and Sage Vasishta eventually came into possession of it.

According to the Anushasana Parva, Kamadhenu was the child of Daksha, the deity who created the entire universe. This claims that once Prajapati Daksha drank the Amrita, which emanated from the Samudra Manthan, Surabhi was created from his belch. Surabhi ended up giving birth to a handful of golden cows termed as Kapila cows. These cows were respected as the world's mothers though too. Some say that Lord Brahma drank an excessive amount of Amrita and spat up some of it.

Kamadhenu, the "cow of aspirations" has a female head, a cow-like body, brightly coloured tropical wings, and a peacock's tail. Her milk is flowing over a Shiva linga when the yoni channels it into a sacrifice for the gods in the holy fire. A different common offering, ghee, is added to the fire by a number of brahmins in the background. The use of milk, butter, and ghee throughout Vedic ritual rites makes the spiritual significance of the cow abundantly clear. From above, encircled by waves of light, Shiva and Parvati observe while making signs of blessing, security, and assurance.

Numerous gurus and their families obtained milk and other dairy products from Kamadhenu. She, therefore, is considered the one who furnishes Brahmins with nutritious food to nourish them. When cruel monarchs aimed to take her away from her owner, the wise Vasishtha, Kamadhenu stood up for him. She acquired the power to summon thousands of troops to annihilate any armies that attempted to attack the ashram (hermitage). She consequently became a representation of Brahmins' protection.

The miracles of keeping a Tanjore Painting of Lord Hanuman

A Tanjore Painting of the Kamdhenu, especially one in which the desire-fulfilling cow is accompanied by its calf, Nandini, is said to bring prosperity, success, and an overall feeling of well-being to your home in addition to satisfying your desires, in accordance with Vastu tenets. The Kamdhenu, a mother figure, is thought to keep all ailments away from your home. As the cosmic cow indicated sustenance, harmony, and abundance, keeping the Kamadhenu Tanjore Painting would also be helpful in eradicating bad health, mental tension, and financial issues.

Q1. How do you identify a Kamadhenu cow?

Kamadhenu cow, also known as Surabhi, is a sacred cow that is considered the mother of all cows and is very dear to Lord Shri Krishna. The body parts of the Kamadhenu cow are of immense importance in Sanatan Dharma. A Kamadhenu is identified by the depiction of the demigods on her various body parts as they are believed to reside in her divine body. She may also be depicted as a white cow having eagle wings and a peacock’s tail.

Q2. What does the “cow and calf” Tanjore paintings of Goddess Kamadhenu symbolize?

The cow and calf tanjore Painting is believed to expel all ailments, negative energy, and bad omen from your home or place of business.

Q3. Can we keep Kamadhenu idol in Puja room?

It is extremely propitious to keep the idol of the Kamadhenu cow in the Puja room at home. Kamadhenu, also known as Surabhi and the wish-fulfilling cow, is considered very dear to Lord Krishna. In the Bhagavad Gita, the Lord tells Arjun “Among cows, I am the Surabhi”. Therefore, her idol should ideally be kept near the deity of Shri Krishna and should be facing Him.