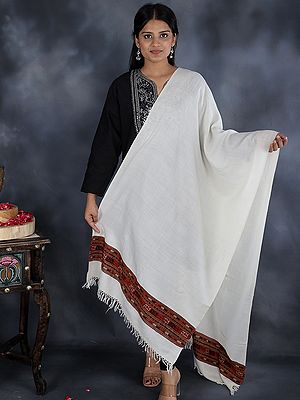 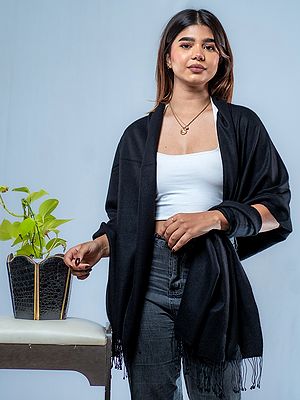 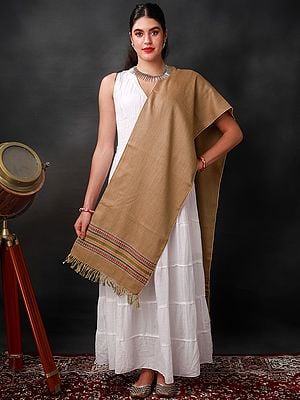 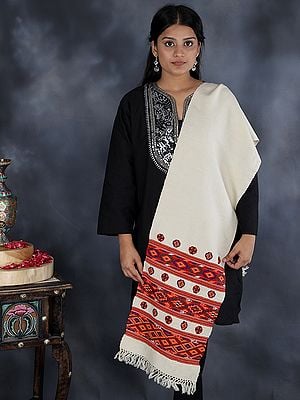 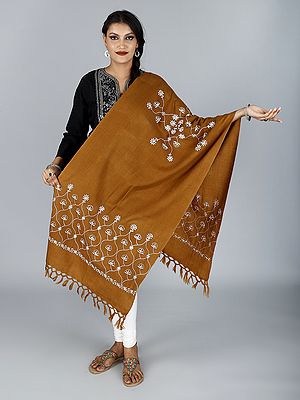 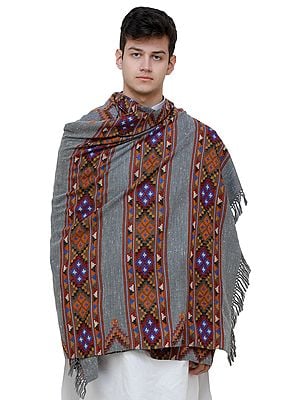 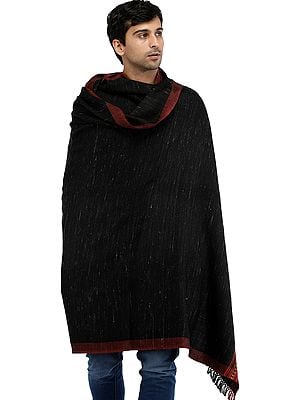 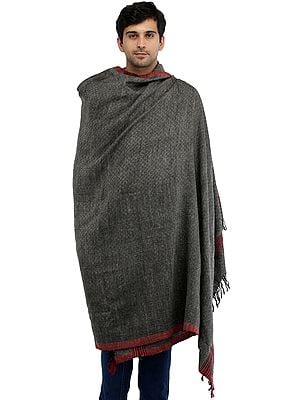 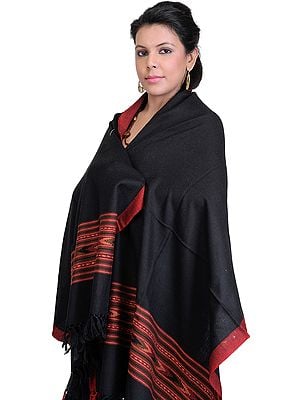 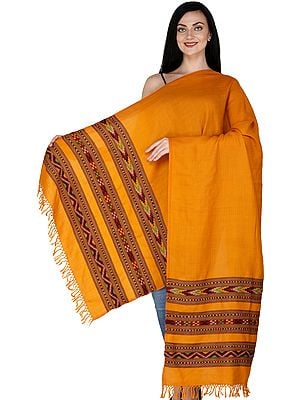 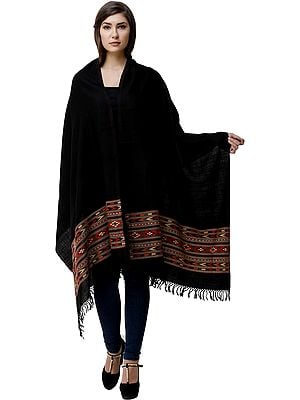 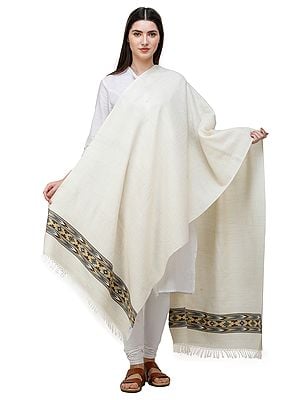 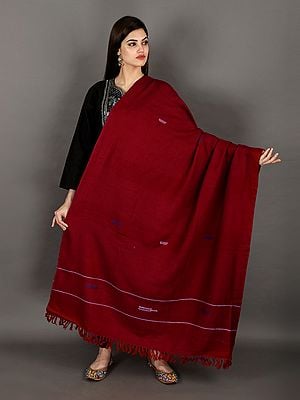 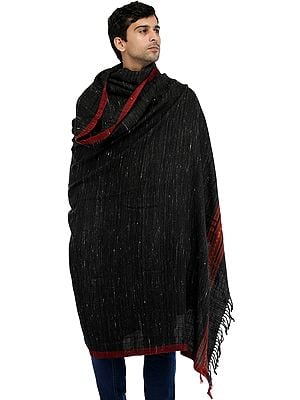 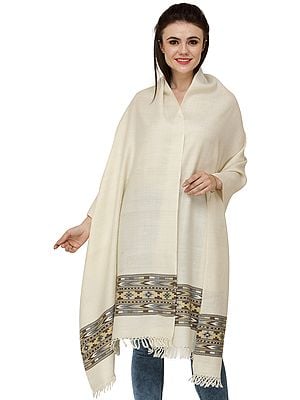 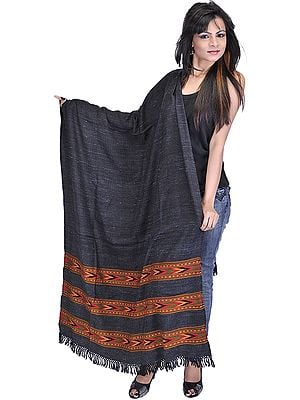 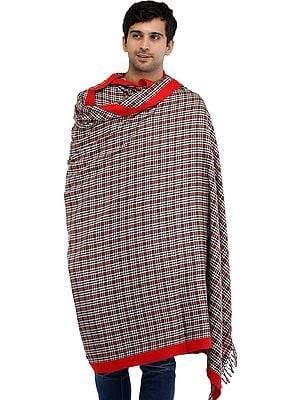 A shawl pattern known as a "Kullu shawl" was established in Kullu region of India, and it has bright colors and intricate decorative motifs. Originally, the native Kullvi people knitted conventional shawls, however after Bushahr artisans appeared, the trend for even more ornate shawls began to become popular. Kullu Shawls are acclaimed throughout the globe for their simple and elegant motifs, quality cashmere fabric, and decent degree of craftsmanship. Either men and women can dress in kullu shawls, but men's shawls are commonly referred to as "Loi" or "Pattu" and are typically simple with really no decoration or only include just a few striped lines on two corners.

Kullu shawls are noted by their bold colors and exquisite geometric designs. These shawls also incorporate floral motifs that can be observed in the middle or the edges in conjunction with the crisp intricate forms. A yarn's color palette generally includes anywhere from one to Eight various hues. As a foundation, wool in mainly warm tones like black, brown, gray, and white was historically used. These hues were commonly embroidered with vivid colors like yellow, red, magenta, and blue, amongst many others. These comfortable shawls are now available in pastel colors as well. Wool yarns are typically spun entirely manually and originate from sheep, angora, yak, or pashmina. Vegetable dyes were employed to dye the yarns, but synthetic dyes have become ever more widespread. Clothes delivery to valleys became problematic in the pre-independence period. Kullu shawls were developed as a result of communities being compelled to design their own garments owing to the rugged and irregular landscape. Because the picturesque valley of Kullu is nestled in the subtropical Himalayan range, the climate is quite suitable for rearing sheep and goats for fleece, thereby making it easier to manufacture woolen items domestically. When individuals primarily manufactured their own winter coats for themselves, almost every household had a pit loom. To protect and defend their bodies from harsh weather, they used it to weave pattu on their pit looms. White, gray, and black were the primary colors used to create the pattus.

The Kullu shawl industry is extremely significant to the area's prosperity. Millions of them earn their living by spinning either part-time or full-time, rendering it one of their principal sources of income. Local residents who live in the region itself and who have acquired their skill from previous generations manufacture these shawls. Handlooms are employed to weave the shawls in the region, and they have become practically ubiquitous in residential villages. These are utilized to spin shawls, either for household use or for commerce. The weaving business in Himachal Pradesh is well-established and not only provides a useful purpose but it also has antecedents in the region's long-standing traditions. It is popular among visitors due to its elaborate designs, which take some inspiration from Central Asia and the Tibetan region, and its rich cultural legacy. On small, narrow looms, the pattis on the shawls can indeed be independently embroidered. After the primary pattern has already been crocheted, the perimeter detailing is applied using the extra-weft procedure. Popular motifs include geometric designs, keys, songbirds, Great Wall of China, doll, rose, comb, waves, star, and temple. The dovetail or slit tapestry threading procedures are employed to design the boundary patterns without the assistance of lined paper or drawings.

Q1. What is the speciality of Kullu shawl?

Kullu Shawls are well-known all over the world for their patterns, which are known for being understated yet sophisticated, as well as for their beautiful woolen fabric and excellent production quality. In addition, Kullu Shawls are known for their excellent production quality. In addition, the manufacturing quality of these shawls is acknowledged to be of the highest standard. Shawls known as kullus are worn by both men and women. However, shawls worn by men are typically known as "Loi" or "Pattu" and are either unpatterned or feature minimal patterning in the form of stripes on two edges. Women's shawls are known as kullus. Kullus are another name for shawls worn by women. Shawls worn by ladies are sometimes referred to by the word "kullus."

Q2. Which shawl is famous in Himachal Pradesh?

The Kullu shawl is the most well-known textile to come out of the Indian state of Himachal Pradesh. The Kullu shawl is woven in the style of a tapestry. Using this method necessitates the use of a wide range of weft yarns, both in terms of color and length, in order to create the desired pattern for the shawl. The length of the weft threads employed in the design is determined by the shape of the pattern's contour. Due to how the architecture is constructed, more thread manipulation is unnecessary. Completing it successfully calls for a substantial investment of time and effort in addition to a high degree of knowledge.

Q3. When did Kullu shawl get GI tag? 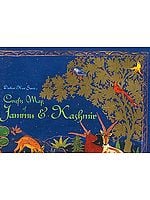 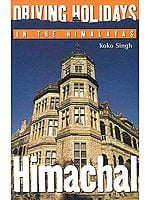 Driving Holidays in the Himalayas: Himachal
By Koko Singh
$39
FREE Delivery
Himachal: A Complete Guide to the Land of Gods
8.5" X 5.5"
Minakshi Chaudhry
$31 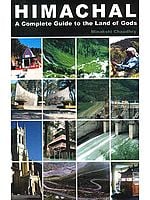 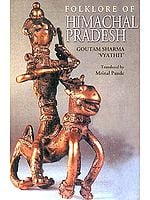 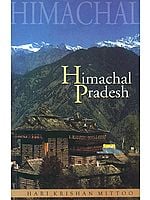 Textiles and Costumes in Early India
"Three conventionalised modes of clothing - one, for the divine female representing fertility, abundance and beauty; two, for an ecclesiastical being; and three, for an entertainer....defined his distinction, rank and role in society. Manu prescribes Brahmins\' sacred thread to be made from cotton yarn. No two figures in Ajanta murals wear a similar costume. Ajanta damsels knew multifarious styles of putting on a sari. Ordinarily, a sari was tied on pelvis wrapping both legs....It was worn on body\'s middle part, that is, from breasts to knees....Designer Blouse from Ajanta which can be the Envy of any Modern Woman."