Bharatanatyam: How to? (A Step-by-Step Approach to Learn the Classical Dance form)

When I look back, my life has been devoted to performing, choreography and above all, to the noble profession of teaching Bharatanatyam, sharing whatever knowledge I possess with my students.

A child has to have an open mind when he/she goes to the Guru. To make the learning more fruitful and meaningful, the student embarks on a long and arduous journey from the exploration of self to the achievement of the pinnacle of glory.

Achieving the goal is not as easy as it may seem. It requires immense dedication and hard work and no doubt, an inborn talent or aptitude for fine arts.

Whenever a student joins the Dance Class, he or she wishes to have a book to fall back upon. It is always been a great task for me as a teacher to dictate or to write notes for each and every student so that he or she understands the theory of dance and also its practice. At that stage, even a simple movement appears complicated. Also, one question that is always asked of me is whether I could suggest a book, that would help the student in understanding the basics of dance. Also a guide book which would assist the senior students when they take up to teaching carrier.

The basic purpose of this book is to present all the principles, methods and techniques of Bharatanatyam in a simple, systematic and comprehensive manner.

It leads the student from the simple to the complex: introduction to the dance form, tala (time measure), gestures, feet positions, the dancer's workout orchestra and the main topics of the dance units, Adavus. The Advus have been explained in detail with complete illustrations.

The pre-recorded audio and the video-cassette to assist in the practice is also available.

Some special features of this book are:
The language adopted is simple and easy to understand .
The book is self-explanatory with over 1400 photographs and illustrations.
Basic Carnatic music notes have been recorded along with the usual Adavu syllables in the cassette.
This will break the monotony of practicing the steps and also familiarize the student with Carnatic music, which is part and parcel of Bharatanatyam.

Drawing inspiration from my teachers and alma mater, Kalakshetra, and combining that with my own experience, I have in a small measure, made efforts to provide an insight into the learning processes of Bharatanatyam, the artistic dance form of India.

It is possible to learn dance pretty quickly if you are taught by a teacher who has a grasp of the inner impulses of the dance. This is even more, true if the student is very young and has limbs which are flexibility of the limbs is an asset at the time of learning, it has nothing to do with the art in real terms except that the best trained limbs are by themselves good to watch in motion. They are the best alternative if dance does not have that curious indefinable inner quality which makes Bharatanatyam at its highest, closer to prayer than to physical beauty or the power of performance alone.

Among the many style of dance that we have in the subcontinent, it is perhaps Bharatanatyam which represents the dancer as Goddess; her costumes, her jewellery, her stance, the clear and precise geometries of the dance, its meaning, its techniques that reveal the visionary four dimensional geometries of the inner space in three dimensional sections. This is also why the grammar of its steps, posture and motion have a certain mathematical formality to its which is what makes it possible for the dancer to represent the inherent laws of the universe by implication through well-known myths and stories. The ability to hint at this insight through dance is a measure of the dancer's greatness.

This is why while the dance takes place right in front of the stage still it belongs to an invisible world behind from which the dance itself is believed to have emerged. This is of course why Bharatanatyam does not sway or pirouette or has any use for the magical catenaries of swirling skirts or veils to produce the gist of its essential message. Even the make-up is not personal but has a ritual formality to it.

It is this grasp of the true meaning of the dance in this inheritance that made it possible for Rukmini Devi Arundale to rescue the art which was for centuries hidden in the interiors of hallowed temples, in shadowy Garbhagrihas to bring it out and flood the stage of art. Dance before the deity as offering of man's Soul was intended to convey how much the dancer had understood and psychic geometries from which the dance had been conceived to communicate with the deity through Mudra and posture. Holding certain Mudras consciously over periods of time in Sadhana is known to transform the inner worlds Sadhakas in any art. In dance these Mudras are the quick of life and the very essence of the art.

It is only with Abhinaya that Bharatanatyam jumps the gap between the sacred and the personal. The late A.K. Ramanujan had said that it is Abhinaya which makes dance sensually visible, until then its visibility is purely psychological. In the Indian context, there should be no need to explain Nritya in Bharatanatyam. The whole universe and all that it contains has been originally defined as a massive dance and the many temples stand witness to this understanding of life. All the temples from Konarak and Khajuraho, Madurai, Halebid or Hampi, the many run of temples that are in full use and those that are supposed to be sleeping, waiting for another epoch to wake up for worship, all these depict dance as a cosmic condition in thousands of statues of various sizes and deportment, always pointing at the magic and illusion of the dance that is extant in all things. This awareness is universal and lies hidden in the march of life and its many anniversaries.

The understanding of these truths are never mentioned directly but enters the consciousness of a child through the oral transmission of the art and its practice from early childhood when the first steps are taught.

The awareness, for example, that the pot of water carried on the Gopi's head which Krishna tries to break represents the values and beliefs to the social order in which the Gopi has been raised. This, the Lord tries to destroy by various stratagems. The Lord also attempts to prevent the Gopis from filing these pots with water where the water represents the private follies and half truth with which human life is lived which are being filled into the social values of her inheritance. This took the Lord tries to prevent by sitting on trees and stealing clothes which are the unsurrendered parts of the human being. That the Lord should want this inner armature of compulsions destroyed is not too difficult to imagine. But these are truths that are revealed to a dancer from the practice of the dance over the years which eventually transforms the dancer's life.

The grammar of the art is formal, and not personal, is intended to keep the central theme of the transformation of the soul rigidly before the student so that at some unguarded moment he or she realizes this circumstance and succumbs to this knowledge. Without this grasp of Bharatanatyam it would be a simpler journey to learn Western Ballet which is all body, lights, choreography and music which will unfurl a delicate story of love, a celebration or a betrayal with power and beauty.

Jayalakshmi Eshwar's book is a "How to" book stating in simple terms all the first steps that are necessary to enter the world of dance. It would be an invaluable guide for a student of the art to help him/her one day to wake up to dance.

Among the many styles of dance that we have on the subcontinent, it is perhaps Bharatanatyam which represents the dancer as Goddess; her costumes, her jewellery, her stance, the clear and precise geometries of the dance, its meaning, its techniques that reveal the visionary four dimensional geometries of inner space in three dimensional sections.

While the dance is seen on stage in front of an audience, yet it takes form in an invisible, mystical world from which the dance itself is believed to have emerged.

Jayalakshmi Eshwar's book  "Bharatanatyam: How to" states in simple terms all the first steps that are necessary to enter this world of dance. It would be an invaluable reference for students and teachers alike.

The book leads the student from the general ideas of the principles, methods and techniques of Bharatanatyam, to the main topic of the Dance units  'Adavus'.

The book is self-explanatory with detailed pictorial and written instructions of the Adavus in a simple and systematic manner.

Over 1400 illustrations integrate to form a comprehensive reference.

A descriptive historical background to the dance form and its evolution introduces the content.

In order to assist the practice by the student, pre-recorded audio cassettes, CDs and VCDs have also been developed as support materials. These can be acquired with the book at an additional cost, or ordered separately.

Jayalakshmi Eshwar is the Founder-Director of Abhinayaa. She trained in the celebrated Kalakshetra of late Smt. Rukmini Devi Arundale in Chennai. Where she imbibed the catholicity and flair of the Kalakshetra tradition.

Today, she is a leading exponent of Bharatanatyam. Her style is modern and innovative within a classical framework. An excellent performer, teacher and choreographer, she has performed at various national and international festivals, and to audiences in Indian, Scandinavia, Europe, CIS Countries, Gulf nations, Latin America, Canada, USA, China, Indonesia, North Korea, Singapore and Malaysia.

She is involved in dance instruction with Suniye, an organization that helps hearing impaired children. She has developed a TV documentary for rural children, produced by CIET and supported by the National Council for Educational Research and Training (NCERT). She also works with the Center for Cultural Resources and Training (CCRT), Bal Bhavan and the India International Rural Cultural Centre. She has been a visiting faculty in 25 schools in Scotland under the invitation of the Asian Artists' Association and the Strathclyde Educational Council.

Her interest in other dance forms has led her to learn and perform Odissi under Guru Kelucharan Mohapatra, Mayadar Raut and Ramani Ranjan Jena. She has also enacted the role of a Tanjore Dancer in the National Award Winning Kannada Film 'Hamsa Geethe' of G.V. Iyer. Cultural organizations have conferred titles such as 'Natya Kala Selvi', 'Natya Kala Nayaki' and 'Natya llavarasi' on Jayalakshmi. She was given the Lion's Club of Delhi Teachers' Excellence Award 2001. 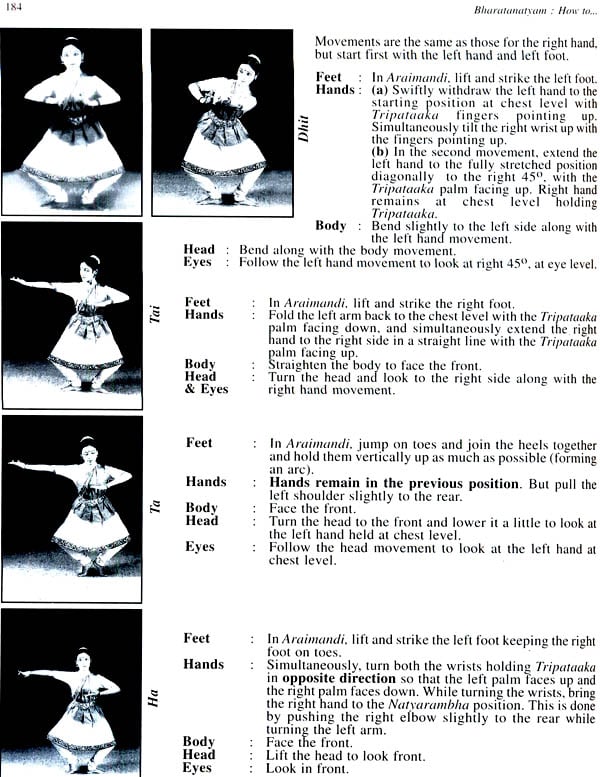 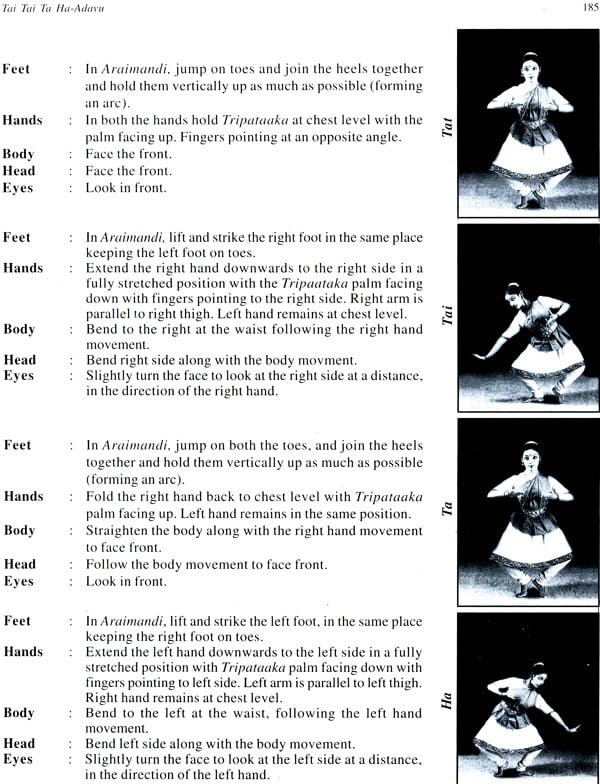 Theory and Practice of Angikabhinaya (In Bharata Natyam)
By Dr. Sandhya Purecha
$200
Out of Stock Mohiniattam: The Dance of The Enchantress
By Geeta Radhakrishna
$43
FREE Delivery The Art of Kathakali
By Avinash C. Pandeya
$31
FREE Delivery