The author, Dr. Shanker Adawal, is a professional in the field of telecommunications. He is presently working for one of the Fortune 500 Indian companies at a senior position. Did his MBA and PhD, and worked with Multinationals in India and abroad, before joining his present assignment. He has traveled extensively both in India and abroad. He also has keen interest in Human Rights.

He got interested in astrology when he was young, did his Jyotishacharya, and has been doing his research in this field for over three decades. His desire and aspiration to share the findings of his research and the new dimensions which can be given to the science of astrology, prompted him to attempt to put details in the form of a book so that the readers can take advantage of the same.

This book, the first of a series, gives an in depth study of the various permutations and combinations which can result in forecasting events so as to help both the astrologer and the native in getting to know of a system and principle which the traditional form of astrology does not clearly bring forth.

l am extremely grateful to my father Late Shri Kailash Chandra who had been the greatest influencer in my life and who taught me the first steps of astrology. He had done lot of research on the science of astrology and published a book on Venus. He has been the sole inspiration for me, as he was the person who was instrumental in initiating my journey through the world of astro-science and this has resulted in my attempting to pen down some of the research work initiated by him in the following chapters.

I was associated with him as a child while he was doing his research work. This is my tribute to him in terms of whatever knowledge I could gather from him as well as the other Gurus, the teachings of f whom have been of immense help in my research work which has culminated into writing of this book.

It would not have been possible for me to attempt something like this had l not had the unstinting and unwavered support of my mother Dr Krishna PhD., my wife, Renu, daughter Vrinda, relatives, friends and colleagues and l am thankful to one and all for all their time, support and perseverance.

It gives me immense pleasure to bring forth the second revised edition of my highly cherished work of Bhrigu Samhita, an ancient and unique treatise in predictive astrology. I was equally elated and feel ecstatic for having received encouraging as well as critical responses from the esteemed and avid readers. It deference to their valuable suggestions and also some ambiguity pointed by them, I have revised some part of the chapter on "Basic Astrology" and also brought about improvement and amplifications in certain parts of the analyses of various charts wherein the evolved principles which are specifically important in delineating horoscopes on the format of Bhrigu Samhita are further explained. This was done with a view to make the explanations more cogent in comprehend. This will also address the concern sown by the valued readers in some places of earlier narrations.

I reiterate that these findings were made by my father Late Shri Kailash Chandra Saxena and I have only attempted to put them in the right perspective. There is lot of research that needs to be done with Bhrigu Nadi system which is an ongoing process.

I am continuing the research and in the third edition I would bring out the link of rotating Jupiter with the star lords and sub lords, then co-relating it with the inner planets. Needless to say, with Saturn which executes the promises of all the planets.

It would not have been possible for me to attempt the second edition with out the un-wavered support of my mother Dr. Krishna Saxena, my wife Renu Adawal, my daughter Vrinda Adawal and relatives, friends and colleagues. I am also thankful to Saurabh Sagar for his support and perseverance. I owe special and sincere thanks to Mr. P.K. Vasudeva, a good friend of mine, who has helped by giving valuable inputs and editing this book.

This revised edition, I trust, will measure up to the expectations of one and all.

Before we set on to analyze a horoscope, I would like to put forth certain crucial principles specific to Bhrigu Samhita which are essentially to be borne in mind.

Brighu Samhita which is available in various forms and formats and also at different places, primarily talks about the results and periods which would come about to be good, prosperous or otherwise. In this book, I thought expedient to set out principles of prediction as a preamble which are based on a sustained research work carried out over the years and thus stand validated. However, I am open to receiving feedback from the esteemed readers which would help going deeper into these evolved principles and predictive techniques.

The leading principle is primarily based upon rotating Jupiter as an ‘Ascendant’. Jupiter turning round the twelve signs takes about l2 years. The longevity of the native shall essentially be analyzed forehand in a given horoscope before proceeding on to other predictions.

It became evident from our researches that Jupiter is the propellant of our life and soul. The native will have joy or grief only when it is signified by Jupiter. The other planets like Saturn, the ruler of profession, Venus the significator of marriage etc., and their results will fructify only, if supplemented by Jupiter.

It is observed that each planet plays multidimensional roles. For example, Venus represents wife, marriage, sex. Further, Venus with relation to Sun (significator of father) denotes mother in the native’s horoscope. Besides, Venus also signifies medicines and so on. The similar multifaceted significations are attributed by the other planets. The same planet confers positive and negative results in the life span of the native it changes its character depending upon the sign and the lordship coupled with the vibrations it receives from the planets posited in the other signs of the horoscope. Each planet, needless to say, has its own unique character which also influences the result and hence can not be ignored.

Although Jupiter is a prime planet defining an event and also Saturn speaks about livelihood of the native, we can not ignore Venus, Mars, Moon, Mercury, Sun etc., as they also govern specific aspects of native’s life. Also each planet represents a large number of living and nonliving factors in a life span.

There are certain books which speak about Karakas and make us understand the role of planets but our research and analyses of numerous horoscopes, helped us formulating and formatting of various combinations in reaching out to such results. I could have conveniently summarized the principles culminating from our research as a rapid reading book and perhaps with the fast life style this would have been more popular, but I do not want to do this. I have referred to those horoscopes which have combinations that one comes across many a times and tried to explain the events. This can be read by anyone having basic knowledge of astrology to discover a new dimension in the predictive astrology.

In the first chart, I tried to explain in a manner as if I am seeking to understand the whole gamut and after running over good about twenty odd pages in this format, I went on to expound the principles relating to the effects of Jupiter’s rotation in a summarized form. However, I do not want my esteemed readers to rush straight t0 this page. In the charts ahead, we looked at the events which can take place with reasons and taking into account the role of planetary disposition influencing the results during each rotation of Jupiter. In addition, the role of each planet is also assessed through lord and its placement in 6th , 8th, 12th, 11th, or 3rd house etc. coupled with impact of retrograde planets. Rahu—Ketu axis also plays a significant role. Besides, three planets aspect may, on analysis, show that negative effects have been countervailed or negative planets rendered powerless. The results of placements and the event taking place are two different aspects which can easily be comprehended on going through the pages of this book. The advantage in this system is that one can check events and move forward with indications.

In some cited horoscopes, I have not indicated the position of the Moon which is not there in many "Leaves" of Bhrigu Samhita that I have come across. The Moon is important and as it travels fast and we have taken it in relation to the movement of other planets while predicting. One of the horoscopes dealt with over here, affirms the importance of the Moon for timing of an event. This is a horoscope of a person who seduced a girl in a temple. For this, the Sun., Venus and other planets make the design and ferments the urge but it is the Moon which covers twelve signs in just 30 days, entices the brain and such an event takes place. At other places, since conjunctions and conditions for and event to occur has been explained, the Moon may not figure over there.

In this book, the method of prediction has been redefined and simply basic principles have been explained. For predicting about the wife, father, grandfather etc., of the native, the relevant planets need to be rotated in relation to the potential depicted by Jupiter for forecasting probability of an event. The rotation of other planets can be taken for a year in one sign except Saturn (two and a half years) and Rahu and Ketu (for one and a half years). Also one must remember about living and non—living things. For example, Venus (a planet of love) signifies wife, relationship in profession, sex and lust, luxuries and is the one planet that adds value. Therefore, placement of Venus cannot negate all things neither its strength gives everything. This is the key which has been explained.

If principles expounded in this book are understood and when actually applied, it will test the water. Therefore we will go into degree-wise rotation in the principal house for Jupiter and do the same in signs for Jupiter and other planets. The superimposition of transit, which is necessary, has been applied while explaining events. This can be further worked upon to time the events by taking the concerned lords into account. This is a path forward and the book is in a form of a project which the readers will find it interesting. However, more explorations can be initiated by those having an aptitude for research.

This is a basic book on ground principles for understanding and is just the beginning and we need to build blocks and the details. I reiterate the fact that this is a research work which is tirelessly carried out by my revered father and as a student and an ardent follower of my father’s path; I have written this work for the benefit of this science in a fond hope that the other will take it forward.

With this background, you can go on to the first chart. An in—depth reading is necessary for proper assimilation of 50 pages that to follow. I have made genuine efforts to bring this book in a proper readable form and should there remained any spelling and grammatical errors, I may be pardon. I however, earnestly wish that readers will read this book constructively and gainfully and with open mind and will attempt to modify these principles duly backed by proper research and their apt application will help hugely the entire fraternity of astrologers. 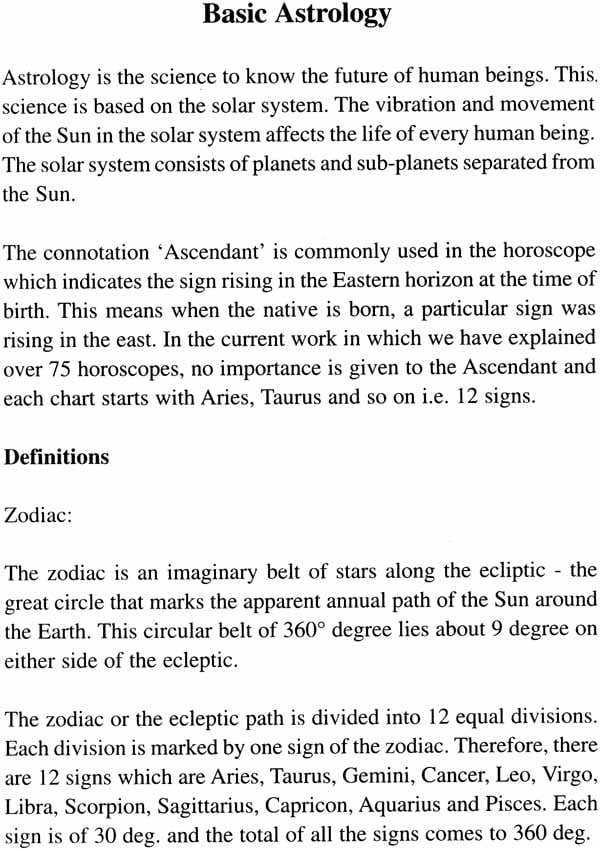 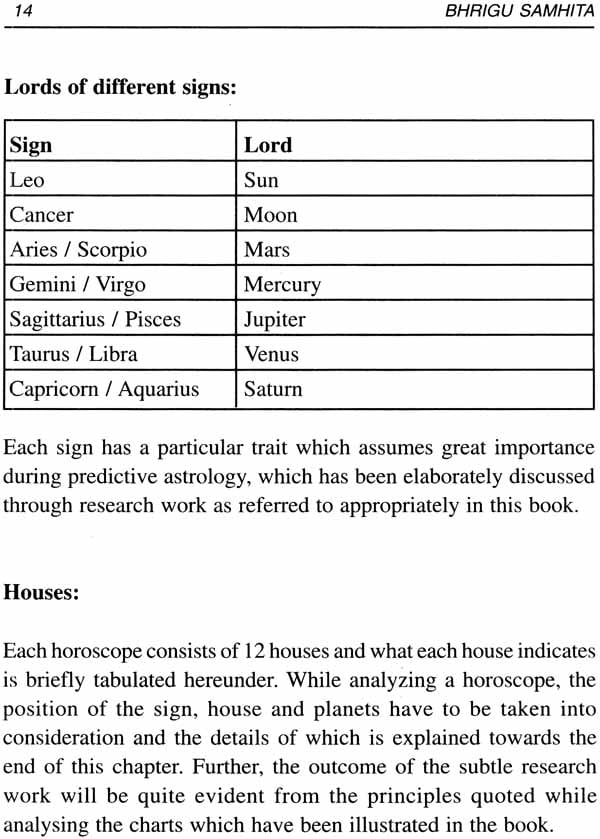 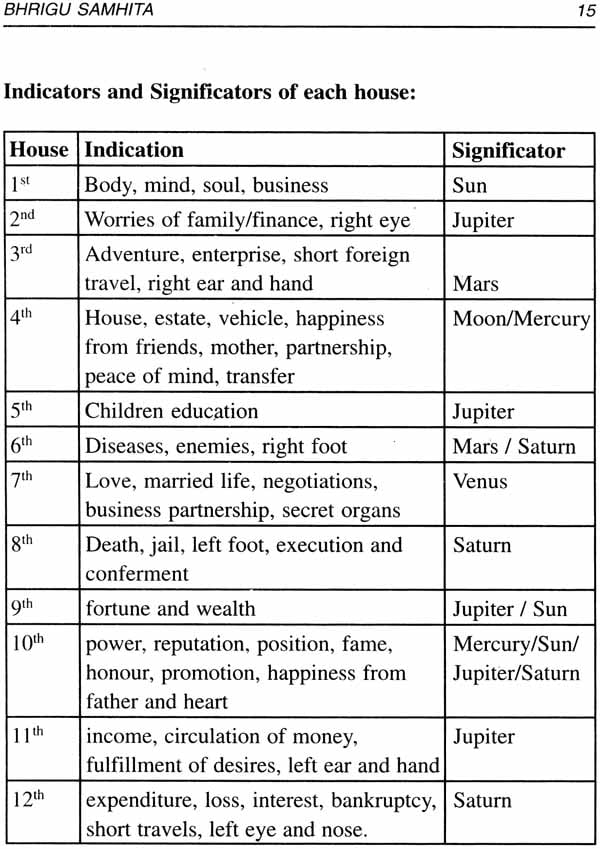 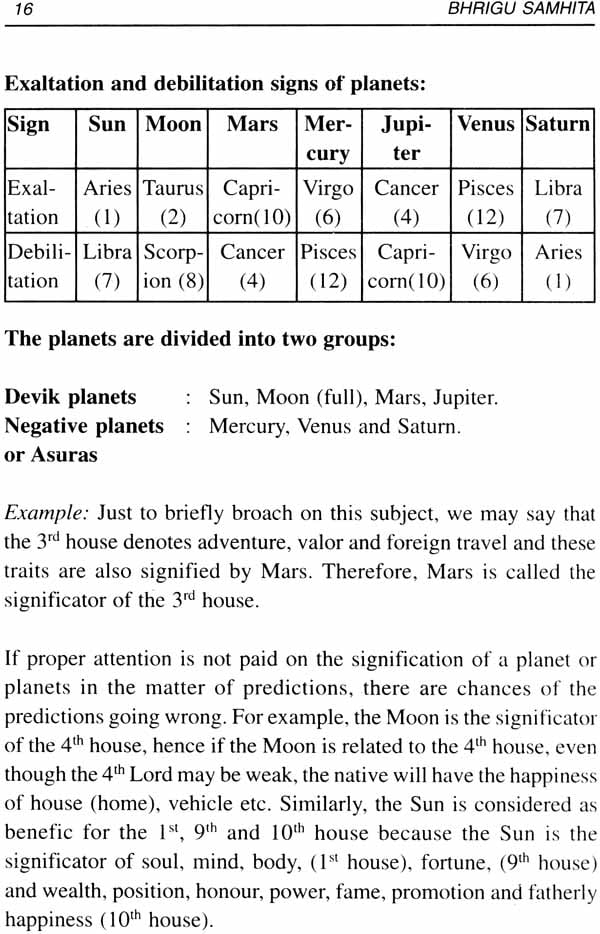 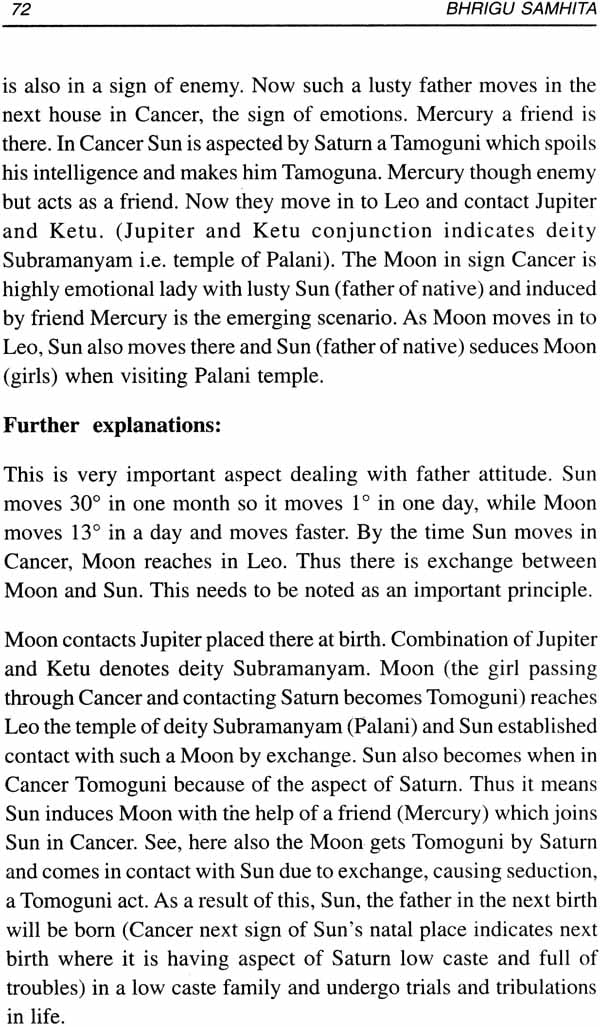 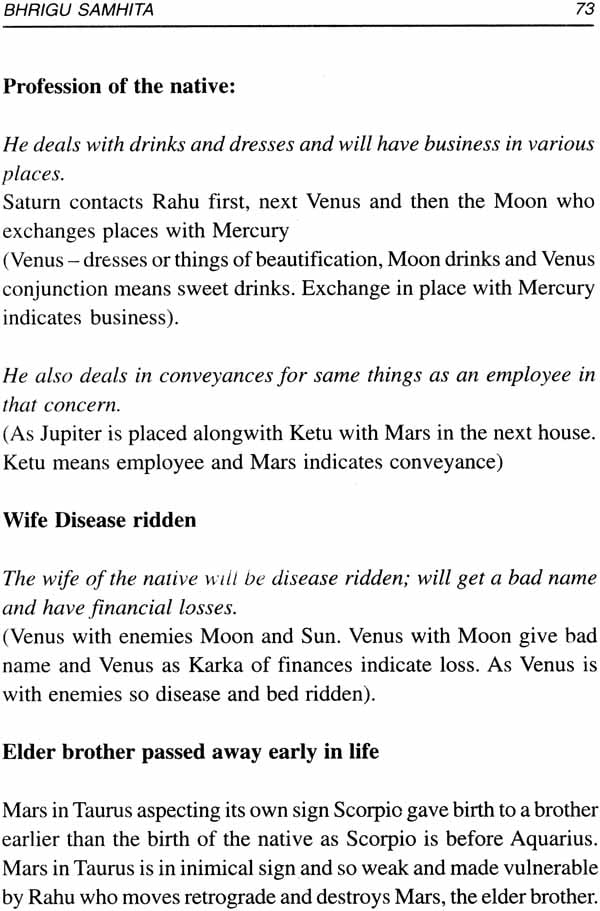 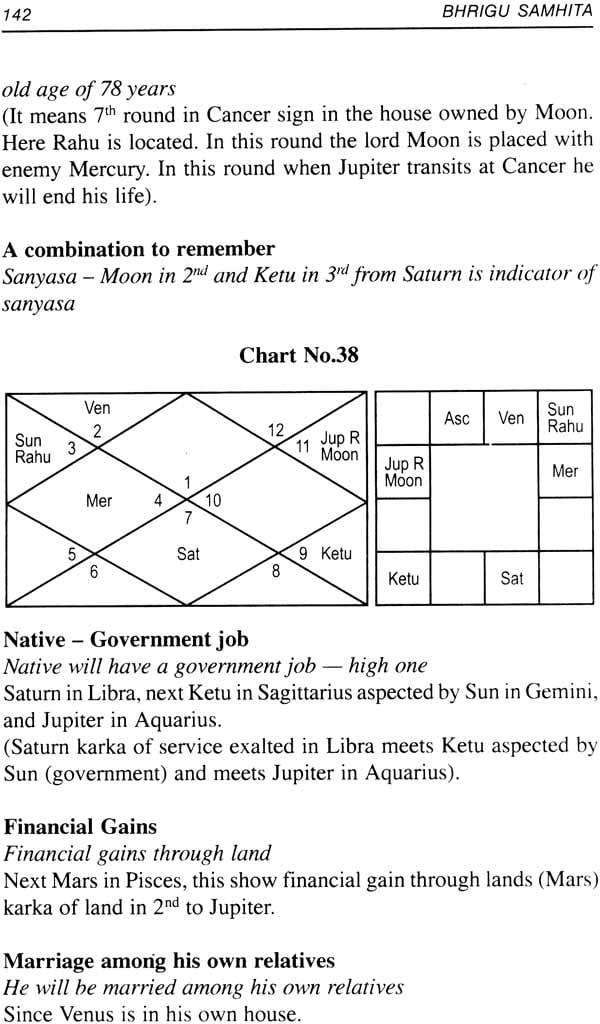 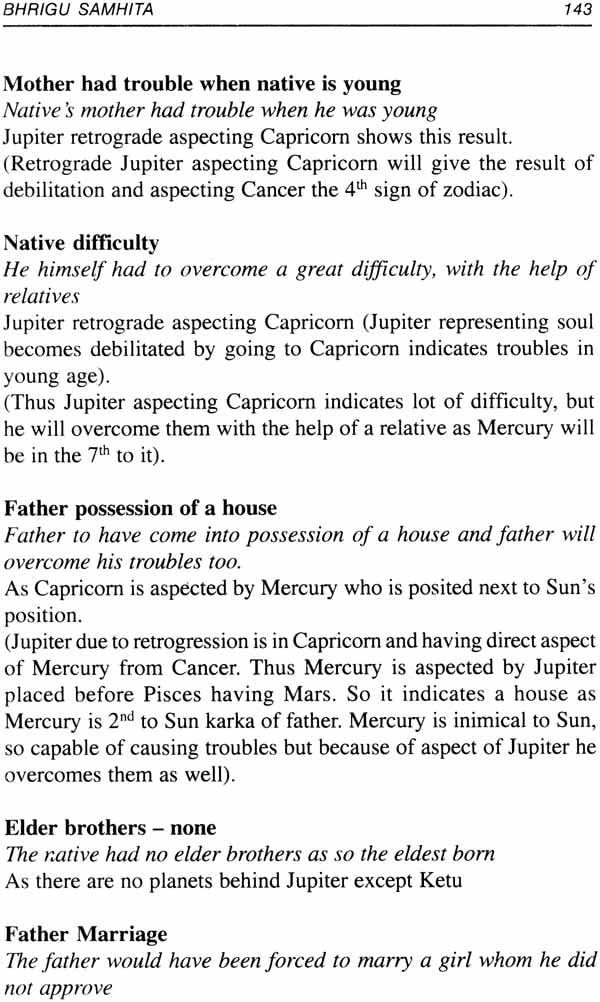 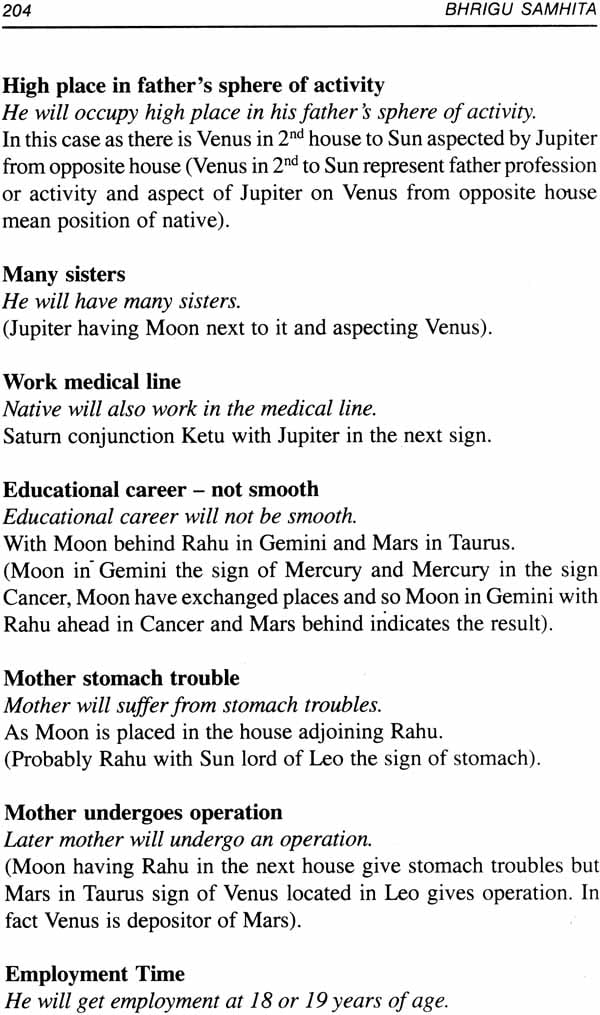 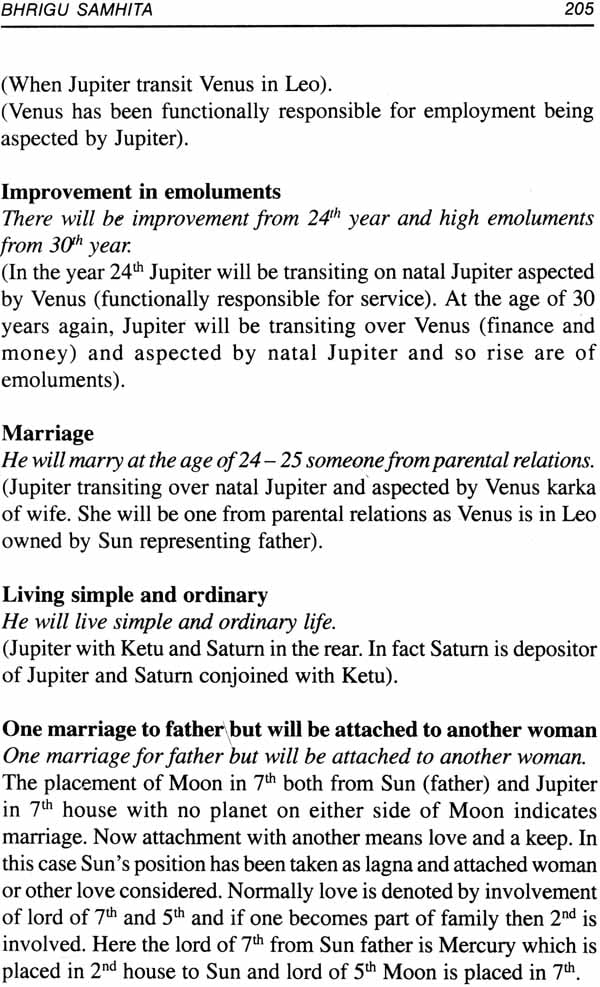 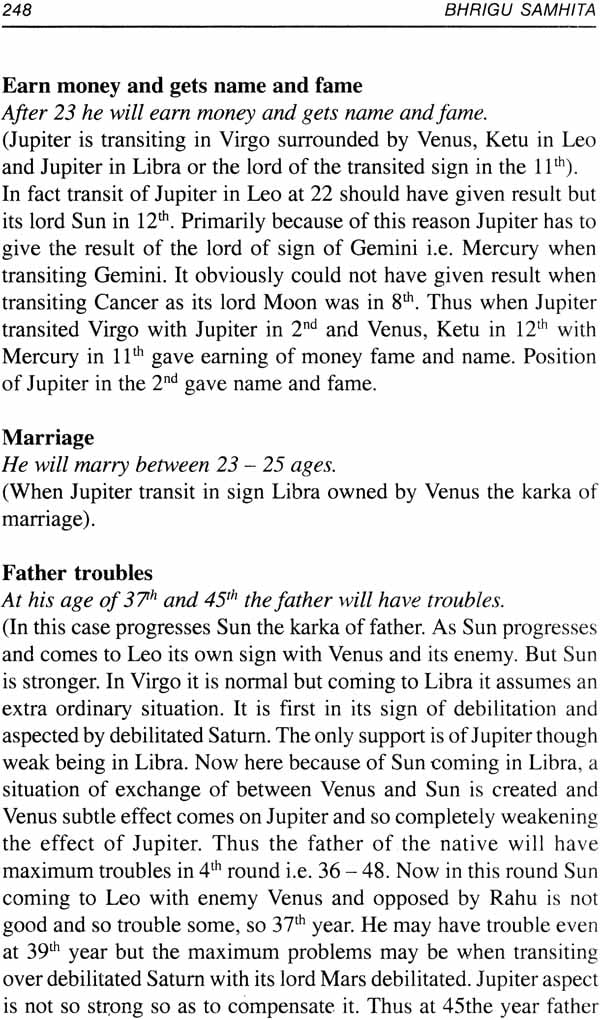 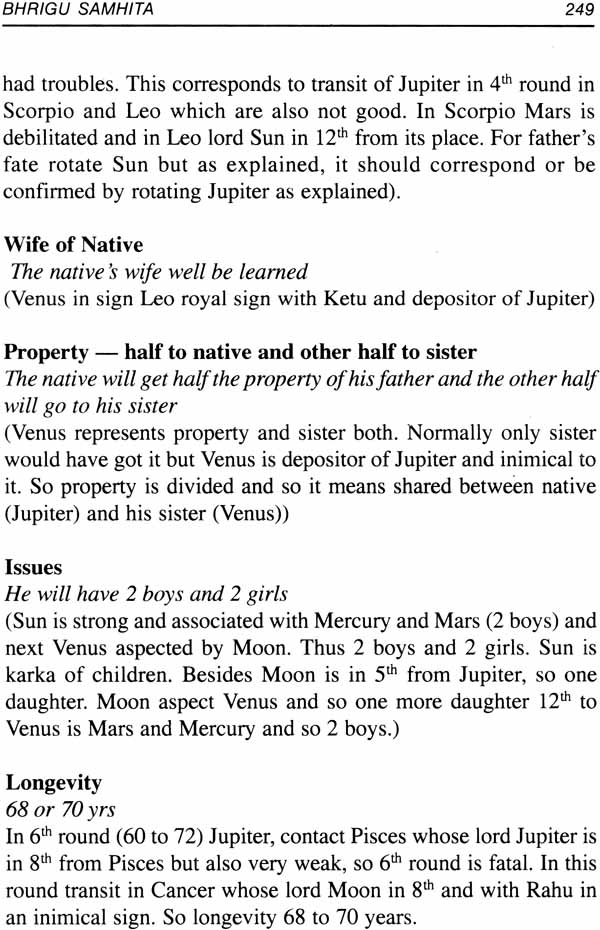 Know about Jupiter and Saturn
By Shanker Adawal
$28.50
FREE Delivery