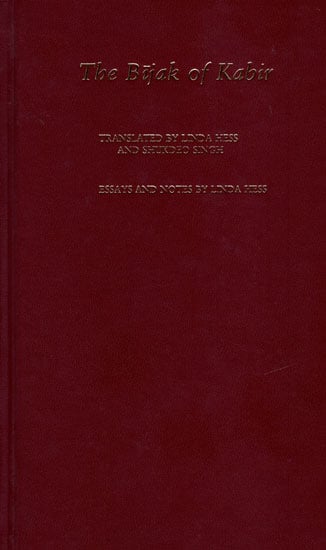 Kabir's poems have been sung and recited throughout North India-by learned pundits and illiterate villagers, by wandering ascetics and classical musicians-for 500 years. He is famed for his rough and powerful voice, his uncompromising challenge to individuals to shake off their delusions, their stiff orthodoxies and pretentious pieties, and to find out the truth for themselves. Several religious sects have made important collections of his works. The Bijak, translated here, is the sacred book of the Kabir Panth, or sect devoted to Kabir.

No one knows exactly when the Kabir Panth was formed. One scholar has estimated that it originated in northeastern India between 1600 and 1650 (a century or two after the death of Kabir), but this is based on rather rough guesswork.) Today the Panth is a large and distinctly organized body, with many branches and a number of subsects under different leadership, some bearing friendly relations to each other, some tending to be rivals. With one major exception, all treat the Bijak as their most sacred scripture.

Because of the visibility of the Panth, the Kabir collection best known to westerners in the early twentieth century was the Bijak. Some also knew of Kabir through the Adi Granth, sacred book of the Sikhs, which contains several hundred songs and couplets attributed to Kabir. In the 1920s Professor Shyamsundar Das, head of the Hindi Department at Banaras Hindu University, discovered two manuscripts which he claimed had been written in the very lifetime of Kabir: one bore a date equivalent to 1504 C.E. These writings had been compiled by another sect, the Dadu Panth, in what is now the state of Rajasthan. Das published the collection, under the title Kabir Granthavali in 1928. His influence was such that the Grantha vali soon became the standard collection of Kabir, especially in the universities. Although the 1504 colophon was eventually proved false, the Granthavali is still the most widely used text in academic circles.

After the Granthavali's publication, the Bijak fell into neglect and even disrepute. Some scholars claimed that it was marred by sectarian bias or that it was not very old. It had appeared only in uncritical edition by Kabir Panthis, with several confusing recensions and countleis variations. The first attempt at a critical edition was prepared by Shukdev Singh of Banaras Hindu University and published in 1972.

In 1976 Dr. Singh and I began collaborating on the present translation, based on his edition. For eighteen months we studied the text word by word, puzzled over many difficulties, and prepared the first draft of the translations. After returning to the United States I added information gleaned from dictionaries and commentaries, put the translations into final form, and prepared the introduction and notes.

In studying the Bijak I have come to believe that its neglect by modem scholars has been undeserved, and that this nearly independent "eastern tradition" (as Charlotte Vaudeville has designated it) is as important in evaluating the personality and poetry of Kabir as the "western tradition" represented by the Rajasthani and Sikh collections. Vaudeville's extensive translations, published in French and English over the last twenty-five years, have strongly emphasized the western tradition.' Ahmad Shah's 1917 translation of the Bijak is stiff and far from the original style of Kabir, and lacks notes on dubious points of translation.8 Dr. Singh and I eventually decided that a selection of about half the text of the Bijak with introduction and notes would be appropriate for a broad audience of readers in English, including both specialists and nonspecialists. I have tried to select those poems which are most powerful and to avoid those which are purely repetitious or which, even after years of study, remain stubbornly opaque.

There are volumes of legendary biography about Kabir, but the widely accepted "facts" about his life can be summarized in a few sentences. He was born in Varanasi around the beginning of the fifteenth century in a class of weavers recently converted to Islam. He learned the family craft (later composing a number of poems with weaving metaphors), probably studied meditative and devotional practices with a Hindu guru, and developed into a powerful teacher and poet, unique in his autonomy, intensity, and abrasiveness. His verses were composed orally and collected by disciples and admirers after varying periods of circulation. He is generally assumed to have been illiterate, and no critic fails to quote the famous verse:

I don't touch ink or paper, this hand never grasped a pen. The greatness of four ages Kabir tells with his mouth alone.

Though of course we cannot prove his illiteracy or his innocence of contact with ink or paper, the notion that he insisted on oral transmission accords well with the gist of his teaching. Of all the terms he used to refer to the enlightenment experience or the means of reaching it, the most prominent is sabda, the Word, along with nama, the name, and rama, Ram. He stresses direct contact with the teacher, indicating that the only authentic teaching is the word from the guru's mouth . And he continually urges immediate understanding, a recognition which (like the apprehension of a vibrating word) is sahaja, spontaneous, simple.

In India, Kabir is almost universally believed (though on shaky historical evidence) to have been a disciple of the famous guru Ramananda. Perhaps the most popular legend about Kabir relates how he tricked the orthodox Hindu into accepting him, a Muslim, as a student. Supposedly he stretched himself across the stairs leading to the river where Ramananda came for his bath in the predawn darkness. Tripping over Kabir's body and fearing sudden danger to his life, Ramananda cried out-as Kabir knew he would-his own mantra: "Ram! Ram!" Kabir then claimed that the mantra had been transmitted and he must be accepted as a disciple. Whether or not the two men were related in this way, Kabir's poetry is full of exhortations to recite the name of Ram, to devote oneself to Ram, to drop everything except Ram.

It should be emphasized that this Ram is not the deity of popular Hindu mythology, incarnation of Vishnu and hero of the Ramayana epic. In a number of poems Kabir explicitly repudiates this anthropomorphic Ram. Though he sometimes addresses King Ram, Lord, or Hari (a name of Vishnu) in the songs, many references to Ram and the Word indicate that his Ram is primarily a sound, a mantra consisting of the long and short syllables Ra-ma. We may surmise that he used this mantra, was perhaps taught it (as popular tradition asserts) by his guru. Whether or not Kabir's own practice was the repetition of "Ram," we know that he recommended it to others as a way of achieving the utter concentration necessary to penetrate the many layers of distraction and delusion, to reach the threshold of a fundamental question: is it two or one? something or nothing? can you find the tracks of a bird in the air? of a fish in the sea?' 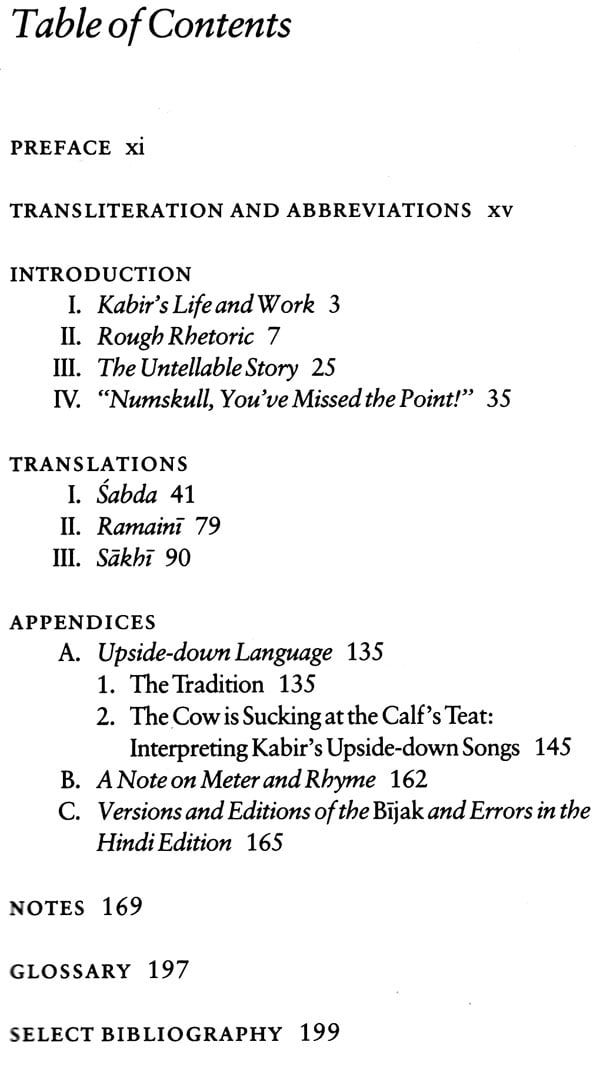 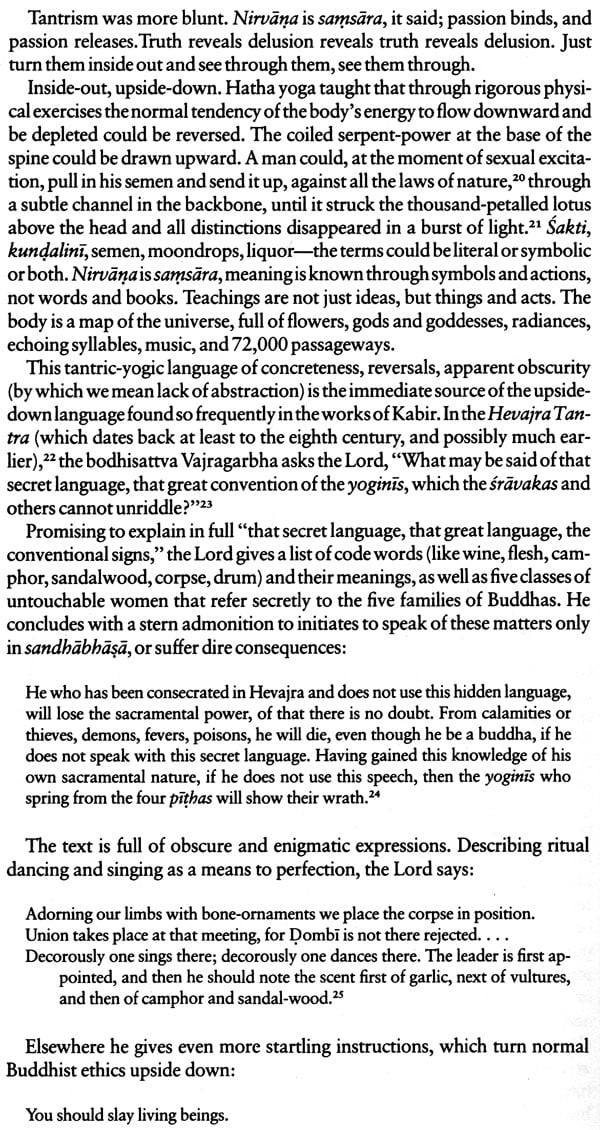 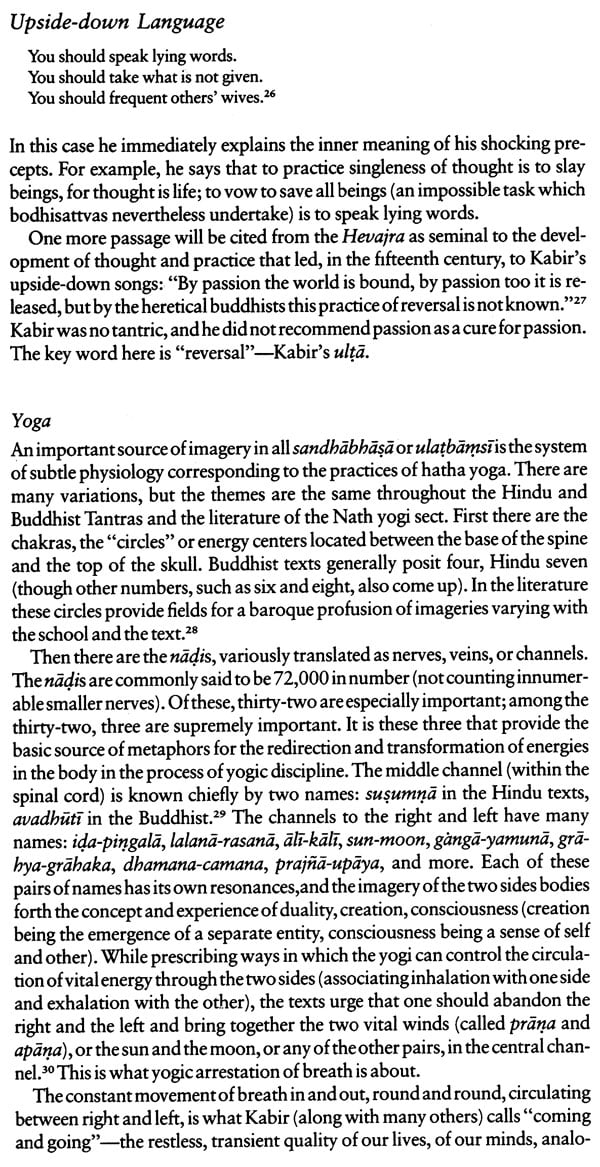 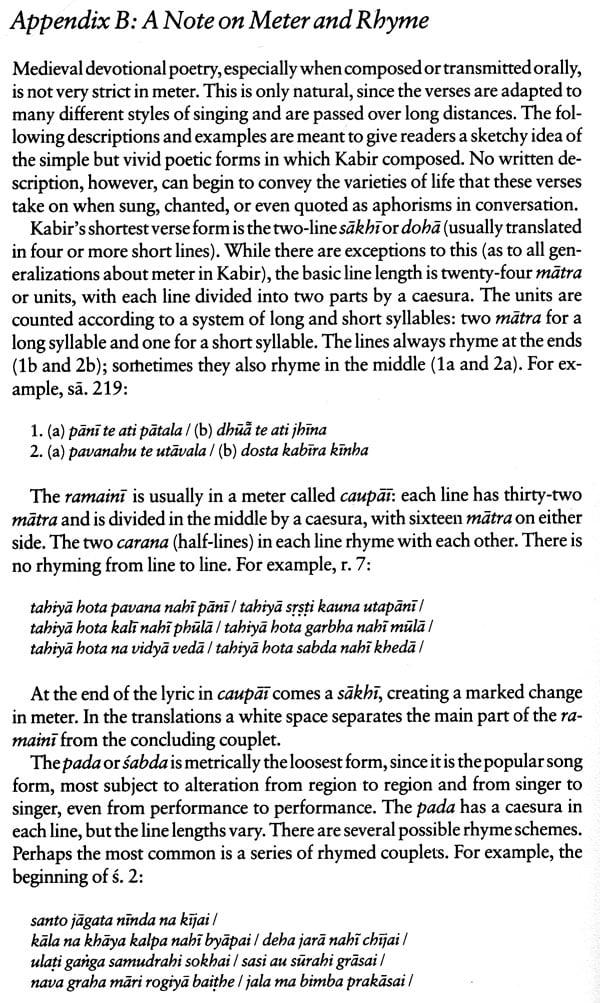 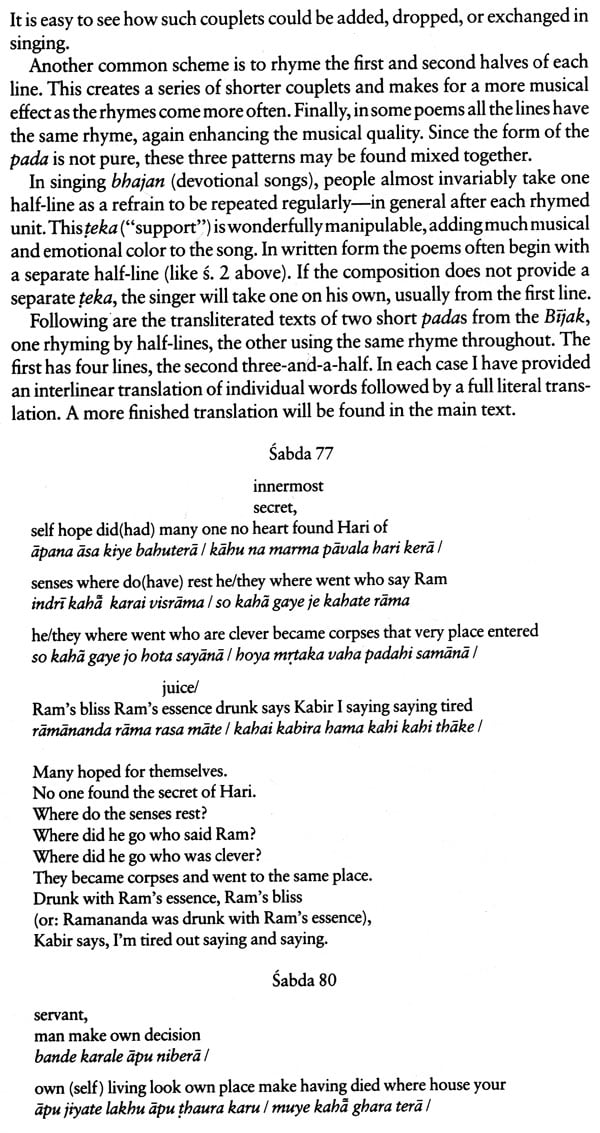 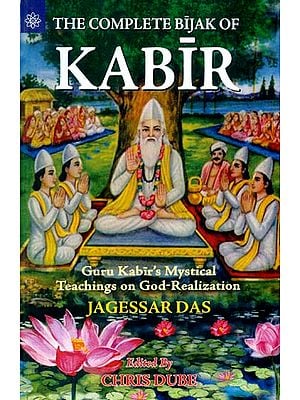 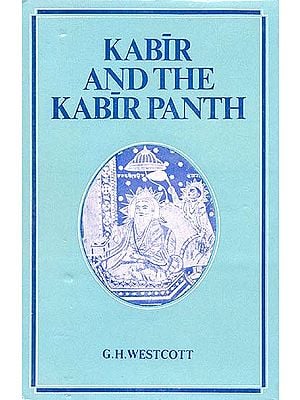