The centrality of gender to nationalism, and to imagining the nation, has been convincingly argued by feminist scholars and activists across the world. As Rada lvekovic says, it is probably the “first organizing principle in any society.”

In this critical set of essays, she advances that argument by locating it in the context of the ethnic or communal division of countries; the gradual, and perhaps even deliberate, depoliticisation of a society that prepoliticisation it towards violence; and finally, in the juxtaposition of nationalism and freedom itself.

Intellectually and politically grounded in the experience of successive partitions, this theoretically sophisticated analysis presents a challenge to feminists and political philosophers alike, on the very notion of the modern nation and its evolution; and on the exclusions-of women, of minorities and of the underclasses-that it engenders.

Rada lvekovic, philosopher, writer and feminist, was born in Zagreb, Yugoslavia, in 1945. She is currently Programme Director at the College international de philosophie, Paris. She has taught at the Department of Philosophy of the University of Paris-8 (Vincennes a Saint Denis) and, previously, at the University of Zagreb, Yugoslavia. She is the author of Le sexe de la nation (2003); Divided Countries, Separated Cities: The Modern Legacy of Partition (ed. with Ghislaine Glasson Deschaumes, 2003); and of Partitions:

An introduction should introduce some piece of definitive writing or thinking. I have nothing of the sort to offer. So this is an introduction to an introduction, any reasoning being necessarily provisional and liable to revision.

Three essays from different years 0992, 1998, 2002) are combined in this small book. It seems only right to me that they should be grouped together and published in India, though none of them (as opposed to other writings of mine) has anything particular to do with India. The reason is that India is inscribed into my biography in many intimate ways, since I partly studied there, and have many friends there. Back home in a country which was also struck by a partition, as was India, in the former Yugoslavia I had read “Indian studies” at University. I would continue to study, read, teach things Indian and South Asian. But although I was not the worst of students, I still had to unlearn it all and reorganise it in my head, over the years, if the subcontinent was to make any sense to me.

My PhD was from Delhi University, on Buddhist philosophy, written under Professor R.C. Pandey in the early nineteen seventies. Thereafter I taught philosophy in the philosophy department at Zagreb University until 1991, when the process of dismantling the country began, then in the philosophy department of the University of Paris-S, Vincennes a Saint-Denis, The Chair I held was the Chair of Asian Philosophies, and the philosophies I taught were Indian philosophies, comparative philosophy, but also French philosophy, feminist theory and various philosophical-anthropological and political topics that interested me, and that I usually tried to present as, and at the intersection of, different currents of thought. Over the past decade, I have embarked on studying partitions, the construction of nations, and in particular on gender and nation, a topic with which the three collected papers here deal. My own main philosophy teacher back home, Cedomil Veljacic 0915- 1997), went in the Sixties first to India, then to Sri Lanka as a visiting professor where he became Bhikkhu Nanajivako, and where I visited him many times, continuing to work with him. He would die a Bhikkhu.

I started teaching Indian philosophies, as best I could, to students who had heard from other teachers, my colleagues, that philosophy started in Greece and existed only in the West, and who dismissed what I thought was Indian philosophy, as religion and mythology. My own professor, Veljacic, an excellent and erudite philosopher with an extraordinary biography, and a good translator from Sanskrit and Pali, contributed to our confusion by telling us that Indian philosophy was as good as western, thereby involuntarily making a norm of the latter. I understood, even as a student, that comparison could not, methodologically, be taken for granted, and that the methodology one uses is not neutral.

This was confirmed for me from different walks of life and in different ways: for example, by my personal discovery of the uncomfortable position of women in philosophy, a discipline that denied us access to, and the capacity for, abstract thinking and theoretical work, before the discovery of the generally difficult position of women everywhere in society and history, alas; it was also confirmed to me through philosophical readings: the Buddhist philosopher Nagarjuna, or, in the 20,h century, through Kalidas Bhattacharya, Wittgenstein and many others. But what was conclusive was some contemporary French philosophers whom I read in the Seventies, such as Irigaray, Derrida, Lyotard, Deleuze and Guattari, many of whom endeavoured to introduce “the Other” into a dialogue scripted by them, where the Other seemed to remain speechless. This was puzzling, as puzzling and comparable to my own feeling of insufficiency at articulation which I felt as a lack of resonance in the milieu. 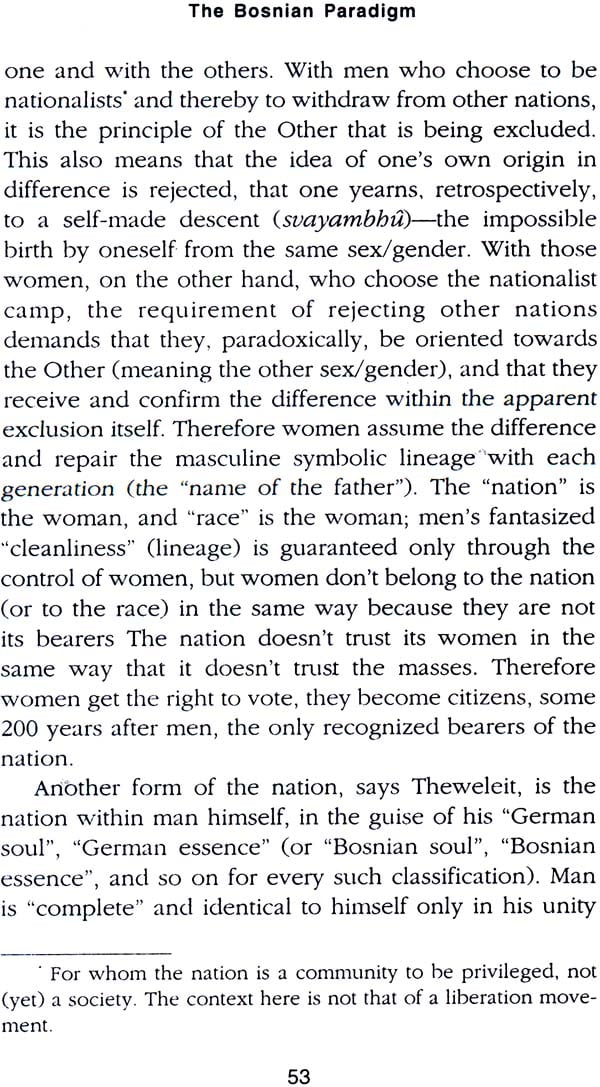