Ganga- The River of Sanatana Civilization

This book is an anthology of 20 papers presented by eminent Archaeologists, Geologists, and Independent scholars on ancient Bhartiya Culture and History. It covers Ganga as known to us through our ancient Texts, the 'itihasa' of its descent from Heaven, the Geological spatial aspect of this divine river that is synonymous with our culture and civilization. Important papers also enrich us with latest archaeology findings of important places on Ganga belt from Uttarakhand to Ganga Sagar, as well as throw light on Ganga through Inscriptions and its traditions in other countries like Sri Lanka, all providing valuable knowledge of the revered river we call Ganga Ma. Some papers also delve into the traditions and philosophy that has influenced our beliefs and rituals that make the use of Ganga waters integral to our life from birth to death.

It is an important collection of information for scholars and students of Research on Cultural Heritage of ancient India.

Neera Misra is an Independent Research Scholar, focused on Vedic and Mahabharata period history and culture, and its socio-cultural impacts. She edited her first book in 2010, Papers on How Deep Are Roots of Indian Civilization, presented at her Trust's 1st International Conference, then penned a limited edition Coffee Table Book Revisiting Draupadi in 2013. Her edited book Indraprastha Revisited published in 2017 got good reviews in Indian Historical Journal and leading newspapers. In 2018 two other books were edited by her, viz., Draupadi and Her Panchala and Felicitating a Legendary Archaeologist: B.B.LaI. The former book was released by Hon'ble Shri Pranab Mukherjee, former President of India and the latter by Hon'ble Vice President of India Shri M Venkaih Naidu. In 2019 she bought out a 2 Volume edition titled Mahabharata Manthan, the first copy of which was presented, on 3rd July 2019, to, and much appreciated by Hon'ble President of India Shri Ram Nath Kovind.

Besides she shares her knowledge via articles on ancient cities and various aspects of Bhartiya cultural heritage for a national magazine. She has presented papers on her work at national and international conferences.

She is the Founder Trustee and Chairperson of Draupadi Dream Trust. With multifaceted talents and interests she expresses herself via various forms. Her avid interest in painting, embroidery and reading since early childhood attracted her to art, culture, literature and history. Her deep centuries old, links to Vedic city Kampilya, the capital of Panchala, enticed her towards research on the historical and cultural legacy of ancient Bharata. Her first study on Development Opportunities in Cultural Tourism was in 2005-06, and since then has convened many National and International Conferences and positioned Exhibitions on Mahabharata Heritage/ Ganga/ Draupadi.

After Graduating with English (Hon) and B.Ed from Calcutta University, she joined MA English, and went on for Post Graduate Diploma in Business Administration, with expertise in critical analysis and organizational work. She is a visiting professor at Government and Private Institutes, and has held several significant positions in government and private bodies and is currently also Member Gurusaday Museum Kolkata.

In December 2018, the Draupadi Dream Trust (DDT) held its 8th International Conference, which was on 'The Significance of the Ganga River Civilization'. An integral part of the conference was our 5th Festival, in the series of our festivals on ancient Indian Civilization and Culture. This was titled `Ganga Utsav', in which we highlighted the Bhartiya civilization and culture that developed and prospered around the auspicious holy river Ganga. These activities were part of celebration of the Trust's 15th Anniversary. We chose the theme of River Ganga, which has been the cradle of Bhartiya `Sanatan Sanskriti', and was indeed the civilization that needed to be brought to the fore.

It will be appropriate to recall that after organizing conferences on the 'Deep Roots of Indian Civilization' (2010);`The Mahabharata' (2012, 2017); `Panchala' (2013), `Indraprastha' (2016), the 'Indus Sarasvati River Civilization' (2015) and the Mahabharata Manthan (2017), it was time to highlight the significance, and pay tribute to, the holiest of holy river Ganga, integral in development and sustenance of Bhartiya civilization.

It is an honor for our Trust to present this book Ganga: The River of Sanatan Civilization. This book consists of papers presented at the two days' International Conference and also highlights of the exhibits displayed at the three week Exhibition titled Ganga: Maa Tujhe Pranam, positioned at this occasion and same location, as part of Ganga Utsay. The conference was enriched by participation of 23 leading scholars, national and international, who have been working on Ganga civilization related fields like archaeology, history, arts, geography, culture and social streams. They presented their research and interesting deliberations and question answer session continued for two days, making it a highly interactive and productive discussion. The crowning glory was the Keynote Address of the doyen of Indian archaeology Prof B. B. Lal. Amongst the papers presented, much interest was generated by the most recent finds at Sanauli, that were very well covered by Dr. Sanjay Manjul (Director ASI), revealing the existence of `raths '(Chariots) in this erstwhile Kuru Mahajanapada region.

These highly researched presentations covered multi-dimensional aspects of Ganga River Civilization, from the traditional history of Ganga avataran to the archaeological findings right from the Upper Ganga Plains, Middle Ganga Plains, Lower Ganga Plains and the Geography of the areas. The papers also touched on the arts and traditions that make Ganga the spiritual cradle of Bhartiya rituals of daily life and preparation for salvation thereafter. States through which the holy river flows have been represented herein, from the Himalayan state of Uttarakhand, the plains areas of Uttar Pradesh, Bihar and the delta region of West Bengal. The book is also enriched with information and imagery of the colorful traditions and the various art forms that connect us to this sacred river.

The Ganga River Civilization, strangely, was never before discussed as a subject in itself, like the way the Indus-Saraswati River Civilization has been studied for years now. Thus this was the first ever focused initiative to invite presentations and have discussion on Ganga River Civilization and Culture. The events played out during the Dvapara time Itihasa revolve mainly around the Ganga-Yamuna river areas and major cities of that historical period are found on these two rivers, Ganga-Yamuna being taken as same family, like sisters. The organizing of this pioneering Ganga Utsav was a truly satisfying experience. The outcome is presented in this humble publication and hopefully will generate sufficient interest in scholars to further widen and deepen their research.

The great success of the Ganga Utsav International Conference and Exhibition goes to a large number of dignitaries, scholars and supporters of our Draupadi Dream Trust. We extend a very hearty gratitude to General Bipin Rawat (the then Chief of Army Staff, currently Chief of Defense Staff) for gracing the Exhibition, giving a powerful Valedictory Address and appreciating the efforts of our Trust. His interest in the subject stems from his own origins from the land of Maa Ganga, Utatarakhand. With much attention and curiosity he spent almost 20 minutes at the Exhibition, admiring the beautiful art works. His address was a powerful message to maintain cleanliness of our rivers and environment, which added so much value to the initiative of the Trust. His gracious participation was a crowning glory of Ganga Utsava.

We are also grateful to Pujya Shankaracharya Sharda Peethum Swami Amritanand ji Maharaj for blessing the inauguration of the program. We are also thankful to Manniya Ram Bahadur Rai (President IGNCA), Shri Rajiv Ranjan Mishra, (DG National Mission for Clean Ganga), Dr Sachidanand Joshi (MS IGNCA), Dr R. Shukla (then MS ICHR), Lt. General (retd.) Vishnu Kant Chaturvedi (Advisor DDT) and Air Vice Marshal (retd) Rajesh Lal, for gracing the program and supporting our efforts to promote Bhartiya Heritage and Legacies. The prestigious dignitaries were as important as the honored scholars who enlightened the deliberations, as will be revealed in this book Ganga: The River of Sanatan Civilization. The collaboration of IGNCA and sponsorship of NMCG and ICHR, along with the grant of Ministry of Culture, made it possible for us to organize this humble Ganga Utsav, facilitating us to bring out the importance of studying the significance of Ganga River civilization as critical to a holistic understanding of our civilization and culture. 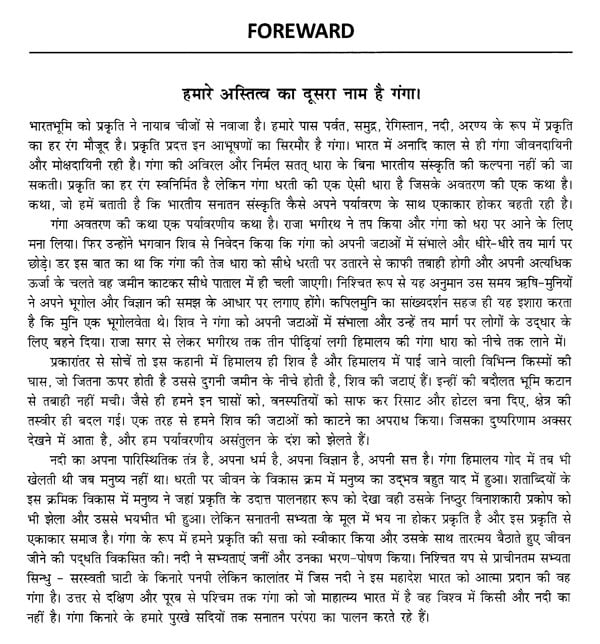 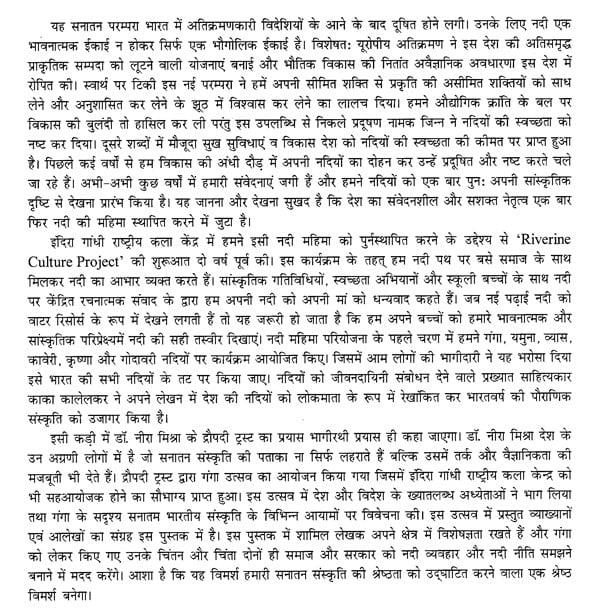 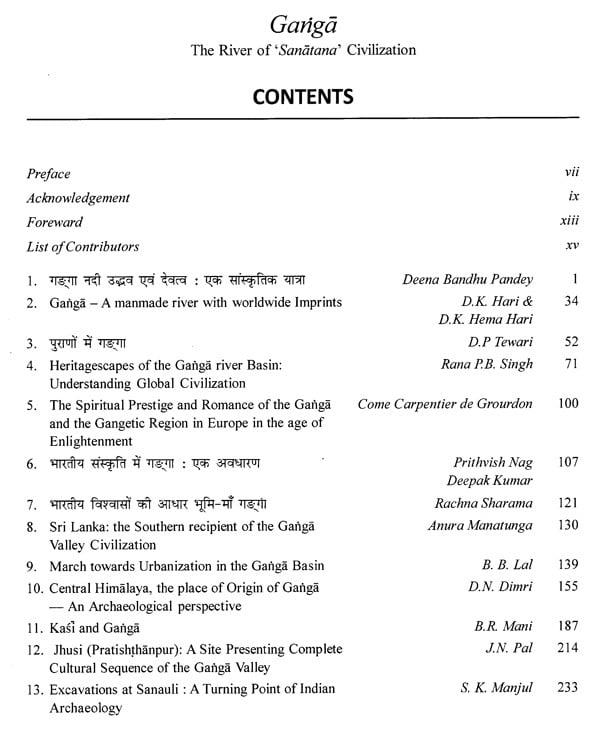 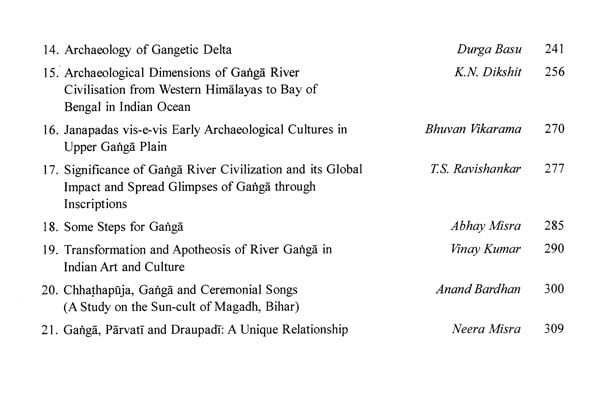 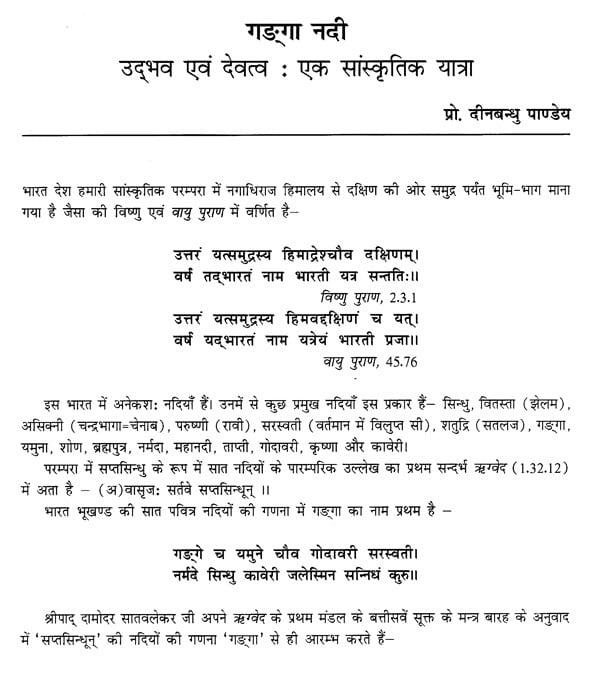 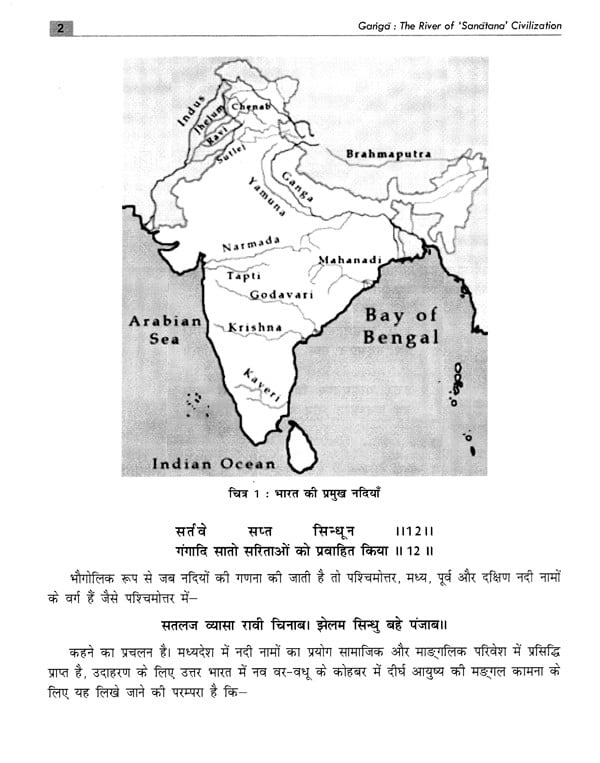 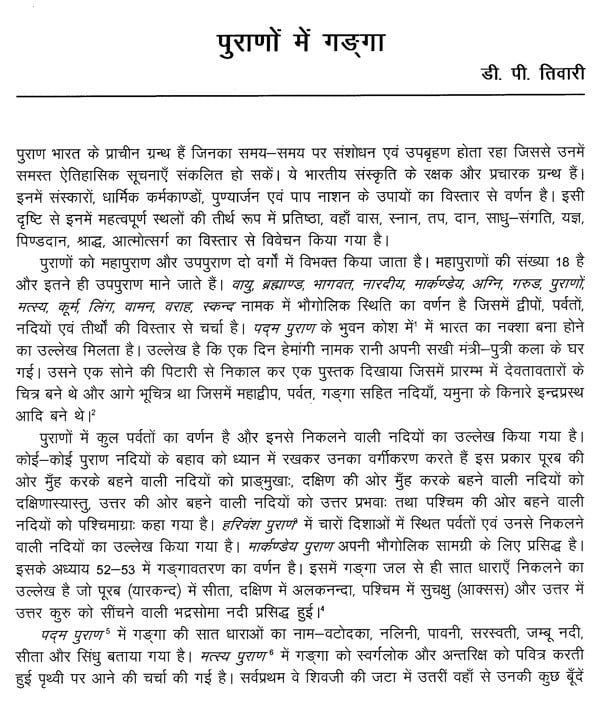 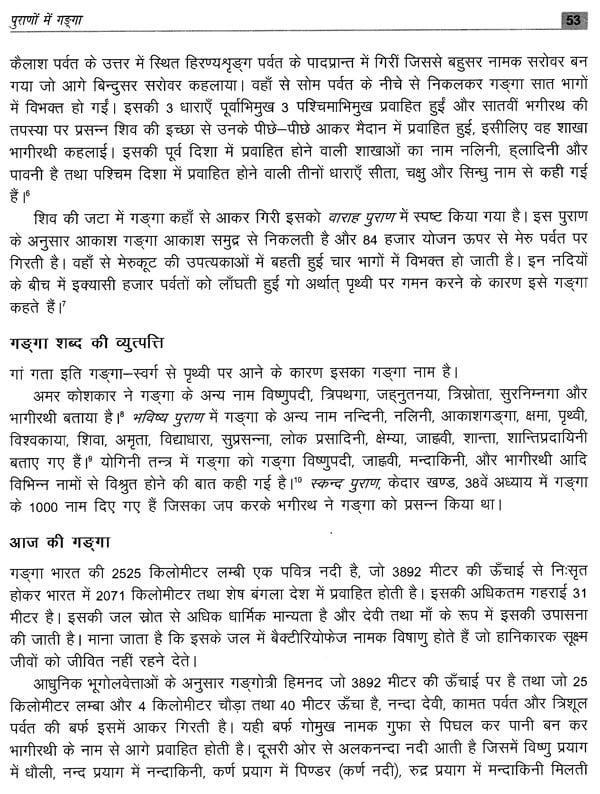 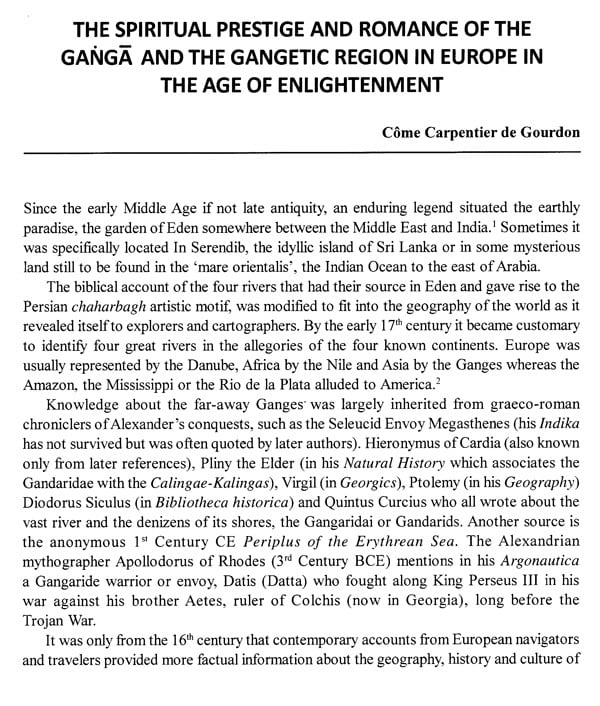 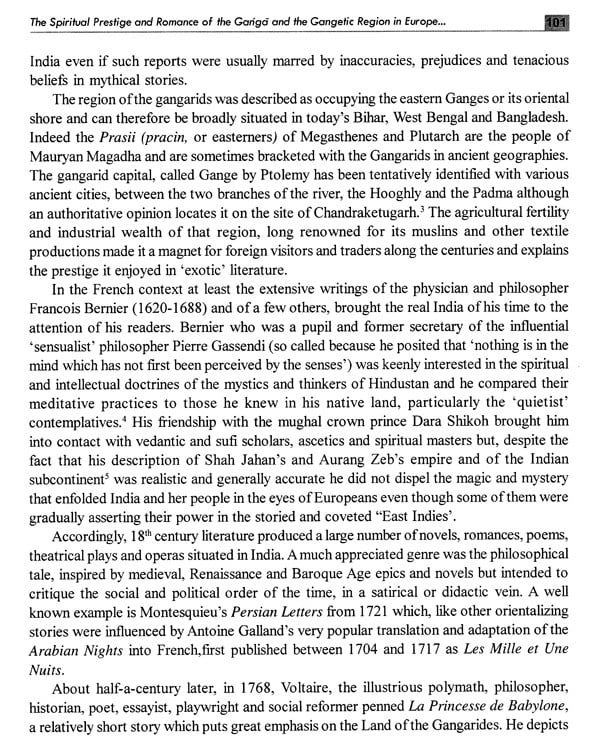 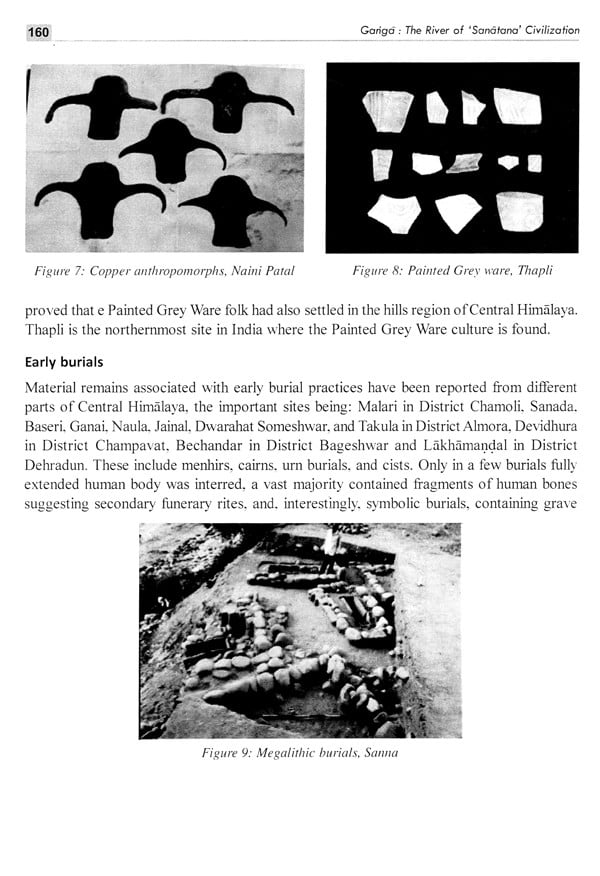 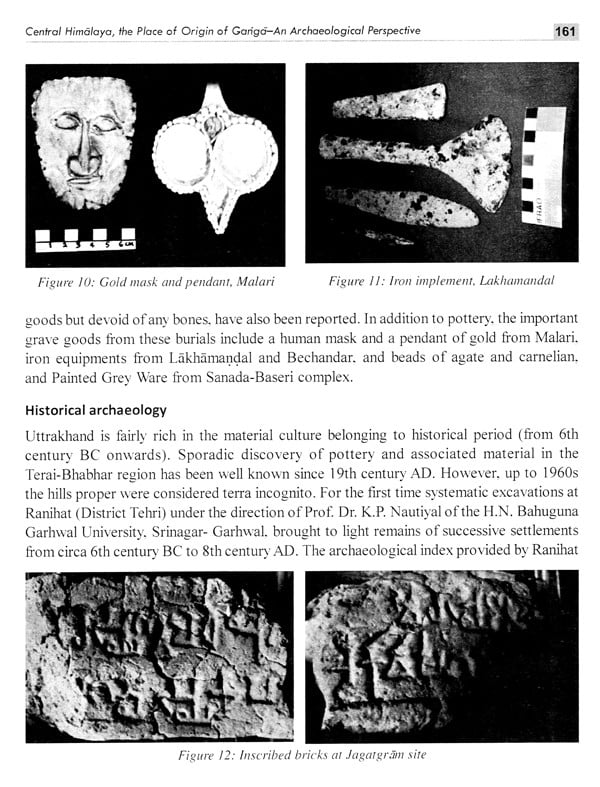 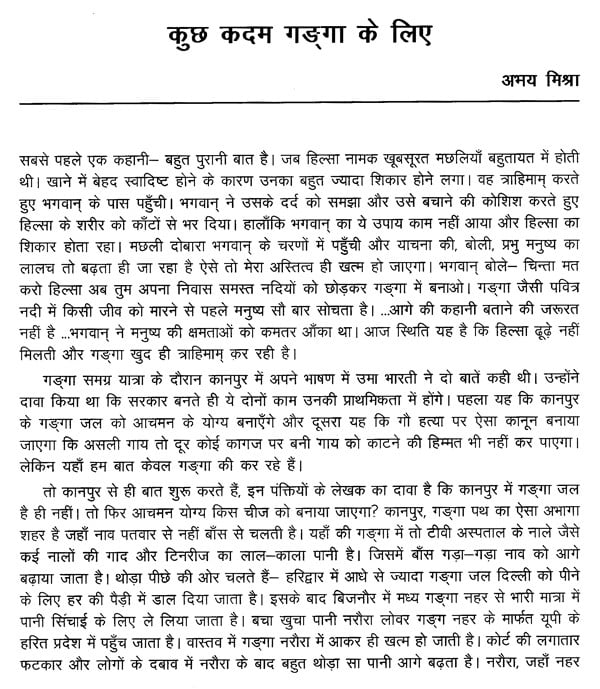 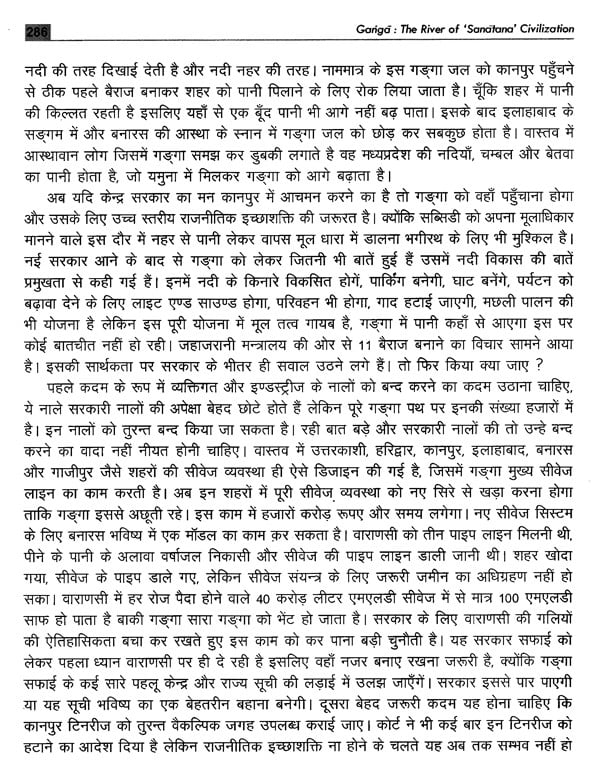 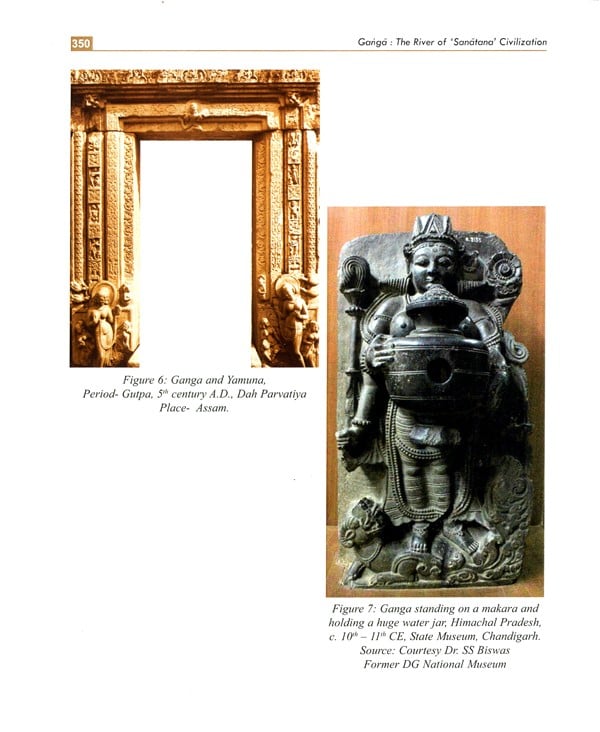 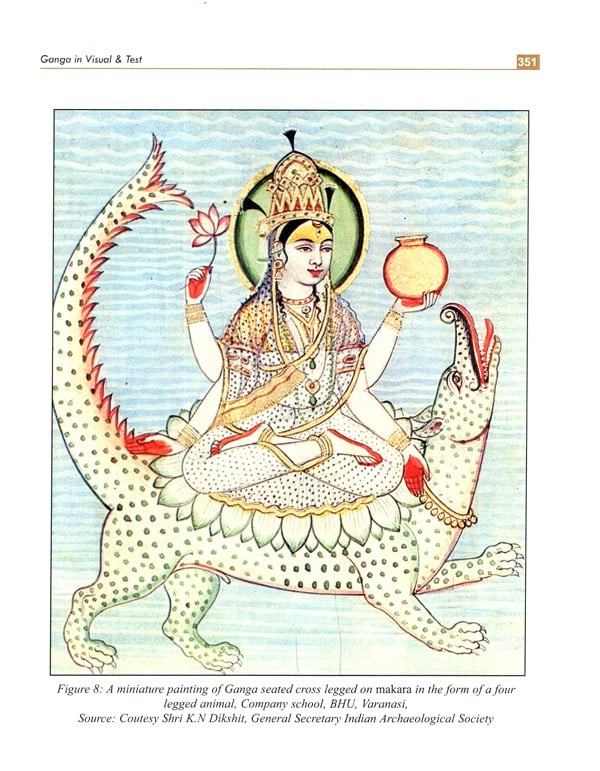 A Picturesque Tour Along The Rivers Ganges and Jumna in India
By Prof. Lokesh Chandra
$79
FREE Delivery