The following materials for a basic course in spoken Bengali represent a revision of the work first produced by Edward Dimock and Somdev Bhattacharji and dated September, 1959. This revision has been made by Edward Dimock, Somdev Bhattacharji, and Suhas Chatterjee,. on the basis of their experience with two years classroom work with the materials, and with the helpful advice and comments those to whom the first draft was sent for criticism.

Since the first draft of these materials was finished in l959 the first several units of Spoken Bengali by Ferguson and Satterthwaite, as well as materials for other modern South Asian languages, have become available. While we have profited by these, our materials differ somewhat in emphasis from them. As has often been pointed out, a language with the richness and breadth of Bengali warrants two, or even several, treatments in teaching materials• Our conversations and drills are oriented less toward practical situations than toward cultural concepts, facts of Bengali life and history, and selected grammatical points; to these considerations we have occasionally sacrificed the illusion of reality. This does not mean that we neglect the structure of the language and do not attempt to train people ‘to speak. On the contrary, the heavy emphasis of our basic course is upon speaking and understanding the language. But in our approach we have aimed at a compromise between purely structural and purely cultural orientation. Student aims, as well as teachers1 interests and methods, differ.

All except the explanatory materials and translation drills have been taped. The use of this book, in fact, assumes the use of these tapes. Much stress is laid, for example, on intonation, in the early lessons. This obviously cannot be understood properly unless it is heard. The work also assumes a certain amount of effort on the part of the instructor. For example, pattern drills, English to Bengali, are given in the text; Bengali to English drills of the same type are not (although such drills are included on the tapes). The preparation of additional types of drills we have left, in this version at least, to the instructor.

We are greatful to Mr. Richard B. Martin of the language laboratory, University of Chicago, for his assistance in the preparation of the taped drills, to our students, for their patience while these materials were being developed and for their criticism, to Mrs. Arati John, to Muzaffar Ahmed and Roushan Jahan of the University of Chicago South Asian Languages Program, for their help with the preparation of the tapes, to Professor Punya Sloka Ray of the University of Chicago for his direct help, advice, and constant encouragement, and to various scholars who have given us their advice and criticism on previous versions of this work. Our thanks also go to the Ford Foundation and the United States Office of Education, to whom the second draft of this was submitted in December, 1961, in fulfillment of contract. However, it goes without saying that neither of these agencies is in any way responsible for the materials in these pages or for the manner of their preparation.

The Language
The Bengali language is spoken by upwards of seventy millions of people in the eastern part of the Indian sub-continent; it is a recognized language in both the Republic of India and the Republic of Pakistan.

Bengali is an Indo—European language, and therefore of the same linguistic lineage as English and the other European languages, though of a different branch of the family. The branch of the family to which Bengali belongs is called Indo—Iranian; its stab—branch is called Indic. In the Indic family among the modern languages (of which the direct ancestor is a form of Sanskrit) are Bengali, Hindi, Nepali, Gujarati, Sindhi, assamese, Oria, Punjabi, Nepali, Sinhalese, and Kashmiri. These languages are closely related to one another, as are, for example, Italian and Spanish of the European Romance branch of the Indo-European family. These are three other major language families in the sub—continent, the Dravidian (including Tamil, Telugu, Malayalam, and Kannada), the Tibeto Burman languages of the north—east, and the Austric or Munda family (tribal languages of central and eastern India).

The immediate origins of the Bengali language are somewhat obsci:tre.1 e chances are that it derives directly from an Eastern variety of an Indic language closely related to Sanskrit, perhaps a “dialectical” variety of that language. In any case, in the stages of Indic language development known as Prakrit and Apabhramsa, it seems clear that in the eastern areas of the Indian sub—continent —— those areas now occupied by the states of Bengal, Assam, Orissa, the eastern parts of Bihar, and the Pakstani province of East Bengal —— divergent forms of language were develping. The earliest work in Bengali which has been so far discovered is that of the so—called carya—padas, late Buddhist religious verses.2 Some scholars date these songs as early as the 8th century, though the 10th century would perhaps be more accurate. Interestingly, these songs have been claimed by the Assamese to be in Old Assamese, by speakers of Oria to be Old Oria, by speakers of Hindi to be Maithali, and by Bengalis to be Old Bengali.

Bengali has a very long and a very rich literary tradition. The high points of Bengali literary accomplishment have been in the periods of the 14th through the 17th centuries, when a great Vaisnava religious literature including lyrics, biographies, and theological treological was written, and the 19th and 20th centuries, when Bengali literature underwent a renaissance in contact with Western literary forms. This is the period in connection with which such names as Rabindranath Tagore and Bankim—candra Chatterji are heard.

That Bengali literature has had these peaks does not mean that between them things were stagnant. On the contrary, in other periods much literature of interest and often of outstanding quality was being produced: for example, the Candi-mangal of Mukundarm and the Vidya—sundar of Bharatcandra. The Muslim rulers of Bengal, who held sway from the be ginning of the 13th century until their defeat by the British in 1757, were in large part ardent patrons of Bengali literature. Under their patronage both Hindu and Muslim writers flourished.

2. Type Of Language
The language which you are about to begin learning is called standard colloquial” Bengali. This is the form of the language which is sp ken by a very large number of people throughout both West Bengal and Ea Pakistan today, though it includes elements peculiar to West Bengali speech, and originally was probably the language spoken in and around city of Calcutta. This does not mean that it is the only form of the spoken language which exists. Dialectical varieties of Bengali occur, and the dialects of, say, Burdwan district in West Bengal, and Chittagong in East Pakistan differ so widely as to be practically unintelligible tc one another. And, the form of the language spoken in one of the major dialect areas of East Pakistan, in and around the city of Dacca, differs from that presented here not only in lexicon, but also to a considerable extent in phonology and morphology. But the “standard colloquial”, or calit—bhasa, will be spoken and understood by educated people at both extremes.

3. The Materials
a. Aims
The title of this book is An Introduction to Bengali. We will not neglect the written language; part of our purpose is to teach you to read Bengali well, and An Introduction to Bengali, Part II, deals with this. But it has seemed to us sound practice to introduce you to the spoken language first. Before we begin to teach you the written language we want you to be able to carry on simple but reasonably fluent conversation in Bengali. Thus Part II of this Introduction, the reader, is designed to follow about five lesson units behind Part I. Our reasons for putting the spoken language first are three. First, it is assumed that you will be using the spoken language sometime in the future that you will at some time be in Bengal. Secondly, the Bengali writing system is quite as deviant from the pronunciation of the language as is the English one; to learn to spell Bengali words in Bengali script is tot the most elementary, and therefore not the first, task. Finally, and perhaps most important, we feel that reading the language will come easier to you if its sentence patterns have become familiar through speech. In other words, when you learn to read you will be able to think of a Bengali sentence or clause as a unit, and not be forced to read “word by word”, trying to fit each word into the sentence pattern consciously and slowly. The importance of this will be seen when it is realized that Bengali is a “leftward—branching” language in its clause and sentence structure; the verb comes at the end of the clause or sentence. If you first learn to think of the verb as coming in that poi— :ion, your eye will go there automatically; good habits are more easily established through speech. Further, Bengali is not a highly inflected language, in which there are many case-endings and other factors to make the relationships of words to each other obvious; on the contrary, Bengali, like English, is a language in which great subtlety is possible through syntactic variation. You would be more puzzled by this if you attempted to go directly to the written language than you will be by mastering the patterns of the spoken Bengali first. 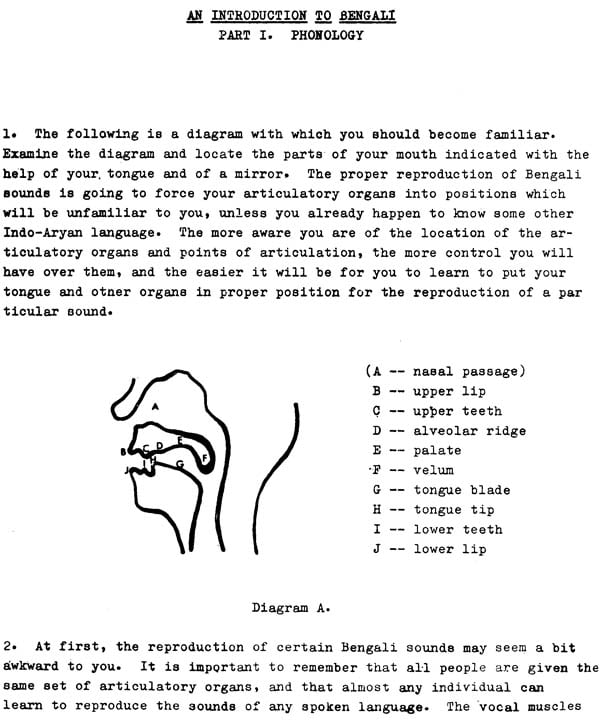 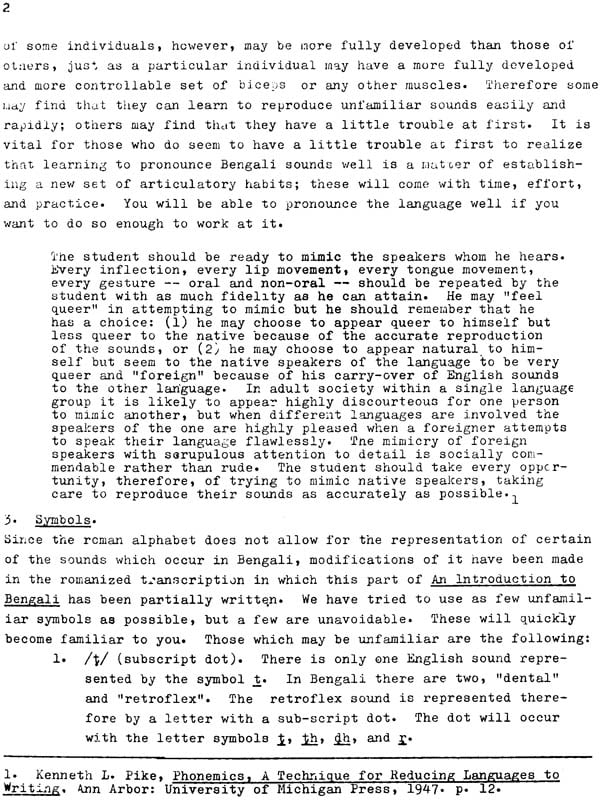 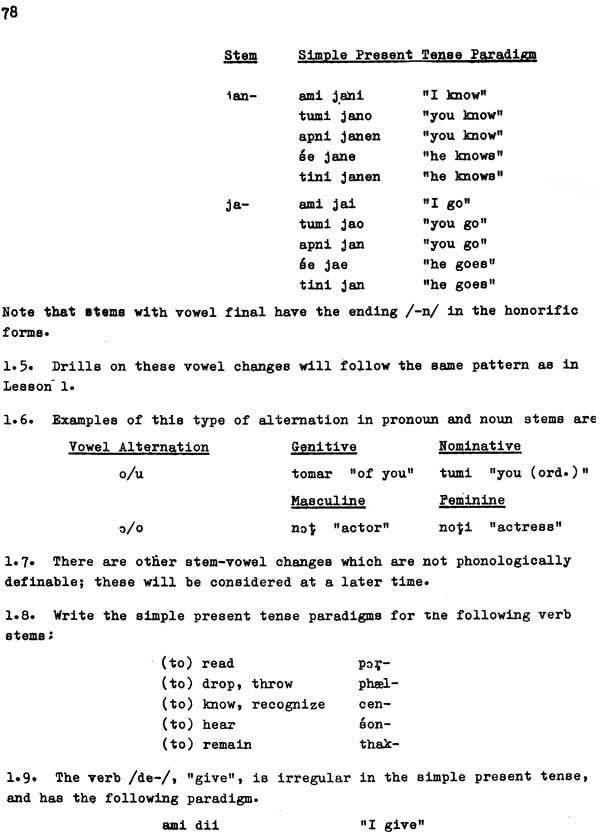 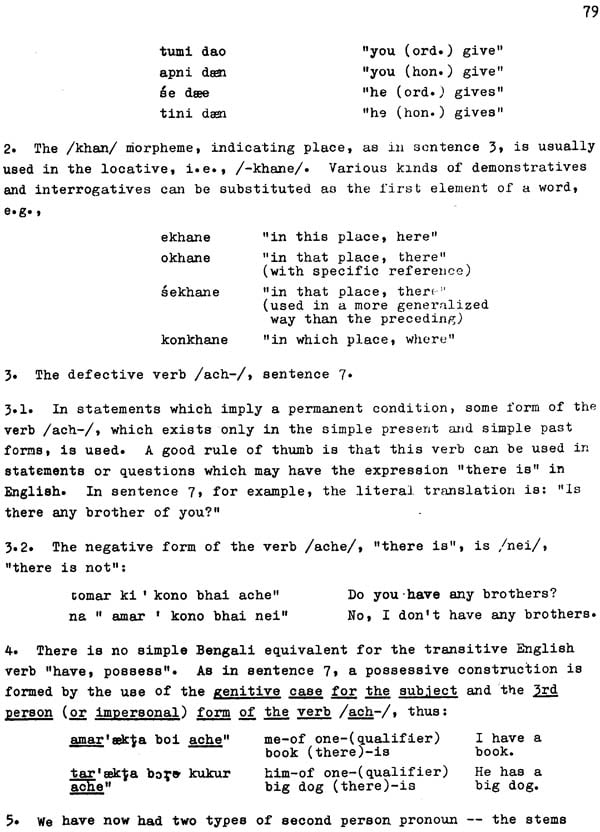 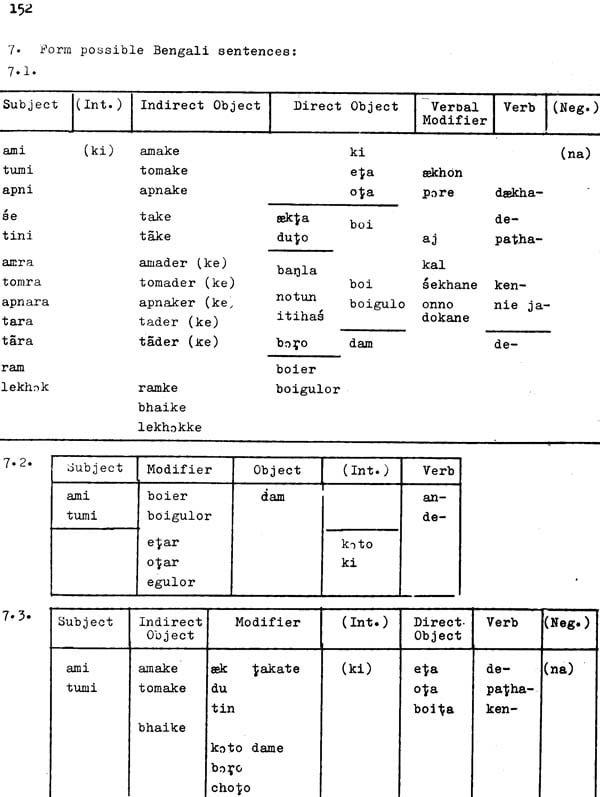 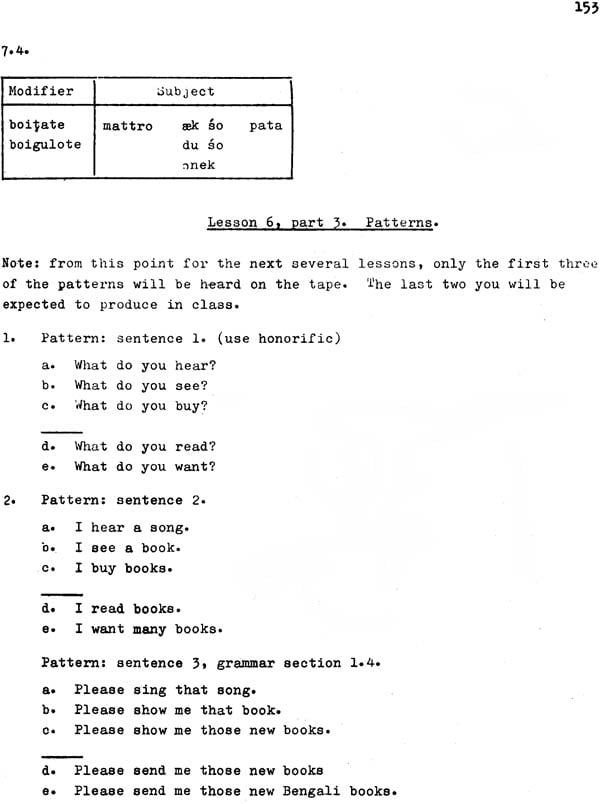 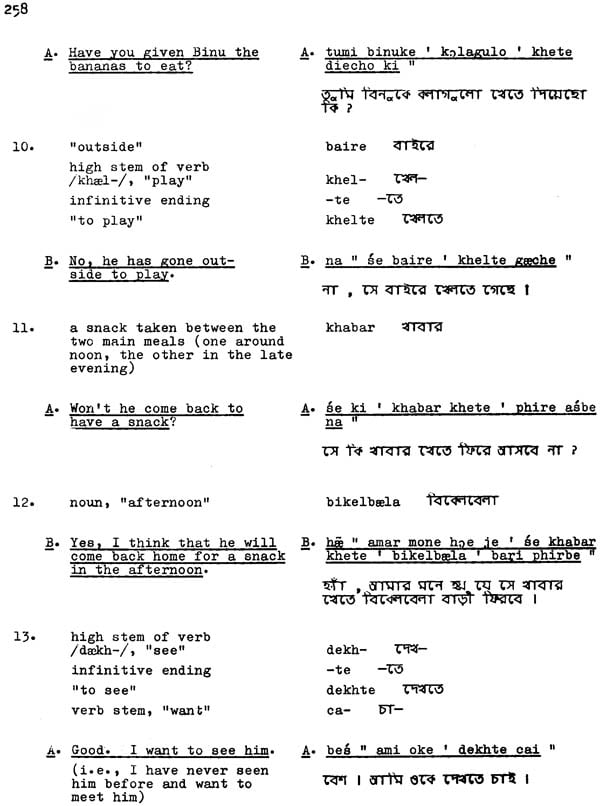 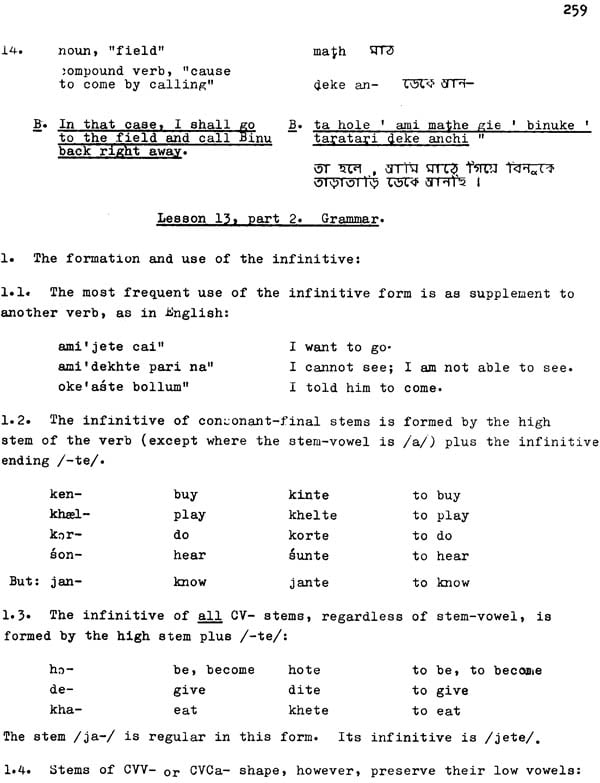 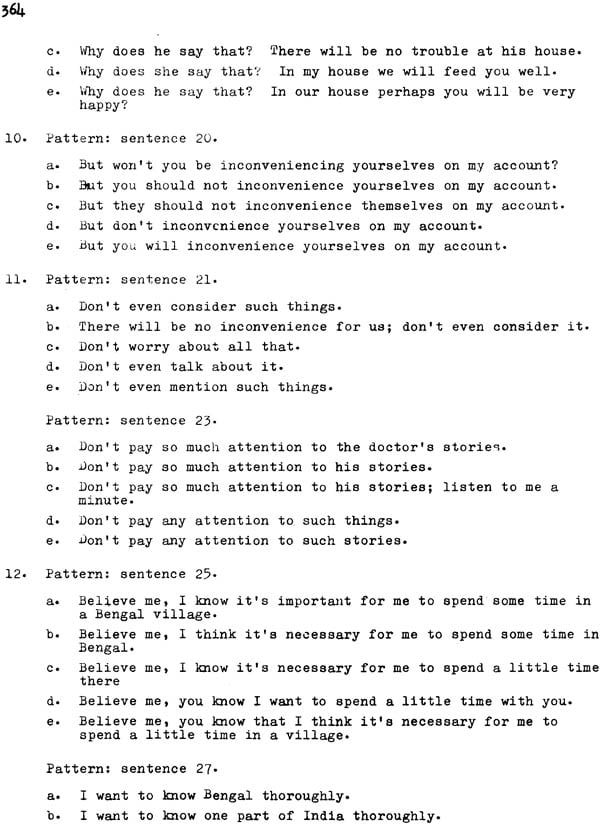 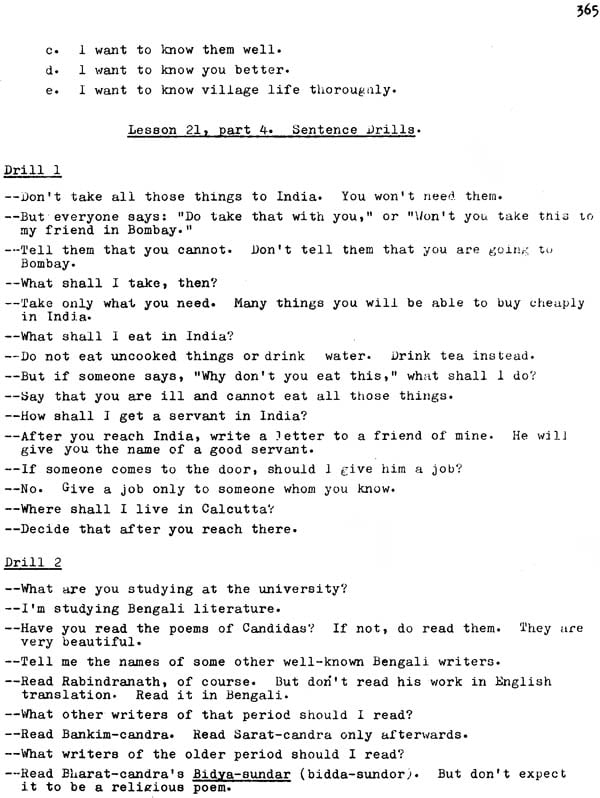 Bengali For Non-Bengalis (Book I)
By Dr. Tushar Kanti Mahapatra
$17