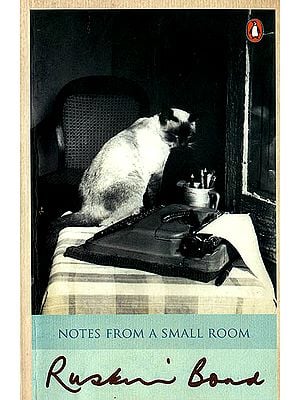 Notes From a Small Room

I have made small bench in the middle of this civilized wilderness… this is my favorite place. No one can find me here, unless I call out and make my presence known. The buntings and sparrows grow “Accustomed to my face”. And welcoming the grain I scatter for them flit about near my feet. One of them. Bolder than the rest. Alights on my shoe and proceeds to polish his beak on the leather. The sparrows are here all the year round. So are the whistling-thrushes. Who live in the shadow between the house and the hill sheltered by a waterwood bush. So called because it likes cold damp places.

It’s simple things in life that keep us from going crazy Ruskin Bond writes in this enchanting collection of essays, a celebration of the uncomplicated pleasures of a life well lived.

In A Good Philosophy we learn of Bond’s unique credo, and in “In Search of the perfect Window” he reflects on the qualities of a good window and its importance to a room. Whether contemplating the sound of a tropical downpour, or the fragrance of lime trees in the Himalayas or a year spent with his cat Suzie, Ruskin Bond transports us to a quieter, more elegant world where time moves at gentle pace. He invites us to revel in the minutiae of life and to poke fun at its absurdities, with insight, wisdom and wit.

Ruskin Bond’s first novel, the room on the roof, written when he was eventeen, won the John Llewellyn Rhys Memorial Prize in 1957.

Since then he has written several novellas (including Vagrants in the Valley, A Flight of Pigeons and Delhi is not far,) essays, poems and chidren’s books many of which have been published by penguin India.

He received the Sahitya Akedemi Award in 1993 and the Padma Shri in 1999. Ruskin Bond was born in Kasauli, Himachal Pradesh, and grew up in Jamnagar, Dehradun, Delhi and Shimla. As a young man, he spent four years in the Channel Islands and London. He returned to India in 1955 and has never left the country since. He now lives in Landour, Mussoorie, with his adopted family.

Shortly after I had finished writing ‘Thoughts on Reaching 75’ which rounds off his collection of essays, I remembered that forty-five years ago I had written a piece called ‘Thoughts on Reaching Thirty’, which had appeared in a couple of Papers. I decided I would try to find a clipping of that old article, just to see if my thoughts at that time were radically different from what they are today. So I rummaged in my drawers and cupboards, looking for old scrapbooks and files, but I couldn’t find the article. Lost, like so many others. Not that it mattered. My thoughts at the time could not have been very brilliant or original. If they had been worth preserving, I would have saved the article.

What I did find during my hunt was a bunch of old magazines, back numbers of the lady, a British weekly to which I had contributed articles and essays of a personal and anecdotal nature over a period of several years, when I was in my thirties and forties. And flipping through them, I came across several ‘lost’ pieces articles which had not appeared again, either in magazines or between book covers, and which I was now happy to see after so many years ‘A year with Suzie’, to see a Tiger’, when time stands still and others pieces which would be unfamiliar to my readers.

I have added them to this collection of new essays and a few old favorite of mine. The shorter pieces, such as Geraniums’, solitude catch a moonbeam, etc, are taken from my diary and notebooks up till last year, and have not been published before. Others such as ‘Remember This Day’, something to celebrate and ‘Those Simple Things, have appeared recently in the magazine supplements of some of our newspapers. Whether written yesterday or long ago, they have a few things in common a love of books, of kindly people, of the endless fascination of nature, of the wide eyed wonder of children, of the sights sounds and scents of a country that never runs out of surprises.

I have made no attempt at chronology. My writing hasn’t changed much over the years. That’s because I haven’t changed. I am still the impractical dreamer that I was sixty years ago, when I decided that writing would be my vocation and my profession.

I do not suffer from writer’s block. I have only to sit down at my desk for the word to come tumbling on to my writing pad. And if an ant moves across my desk, I shall record its transit. The world may be in a state of financial and political turmoil, but that doesn’t mean ants should stop going about their business. Ants are determined creatures, who will be in the sugar-bowl no matter how high on the shelf you place it.

I keep my old typewriter for sentimental reasons, but now I do all my writing by hand. I have nothing against computers, but I like the feel of paper and I like watching the ink flow from my pen. As long as my fingers are still firm, why not use them?

There is something sensual, physical, and intimate about writing by hand. It takes me back to my childhood when I was first learning to write letters and join them together. When I had any difficulty, my father would put his hand on mine and guide it along the page his hand is still there. I feel it now, even as I write. And may loving, long-gone hands touch yours, dear reader. 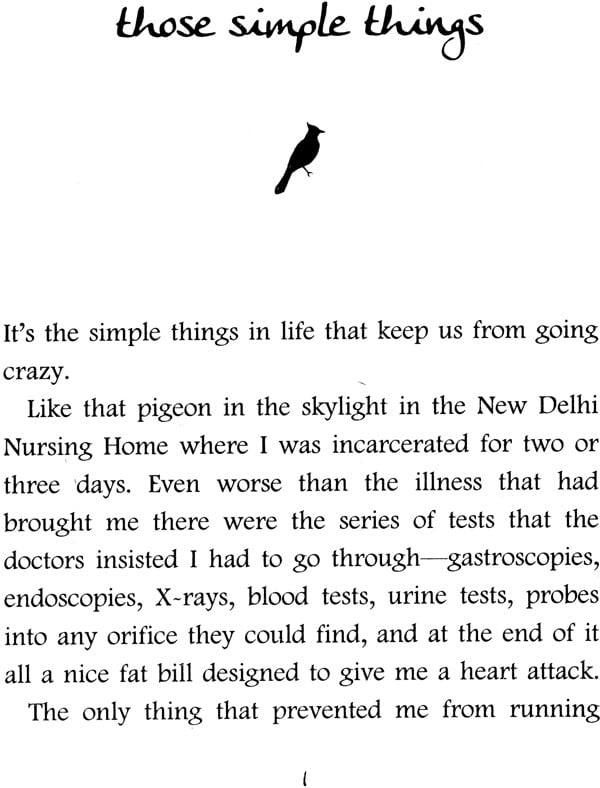 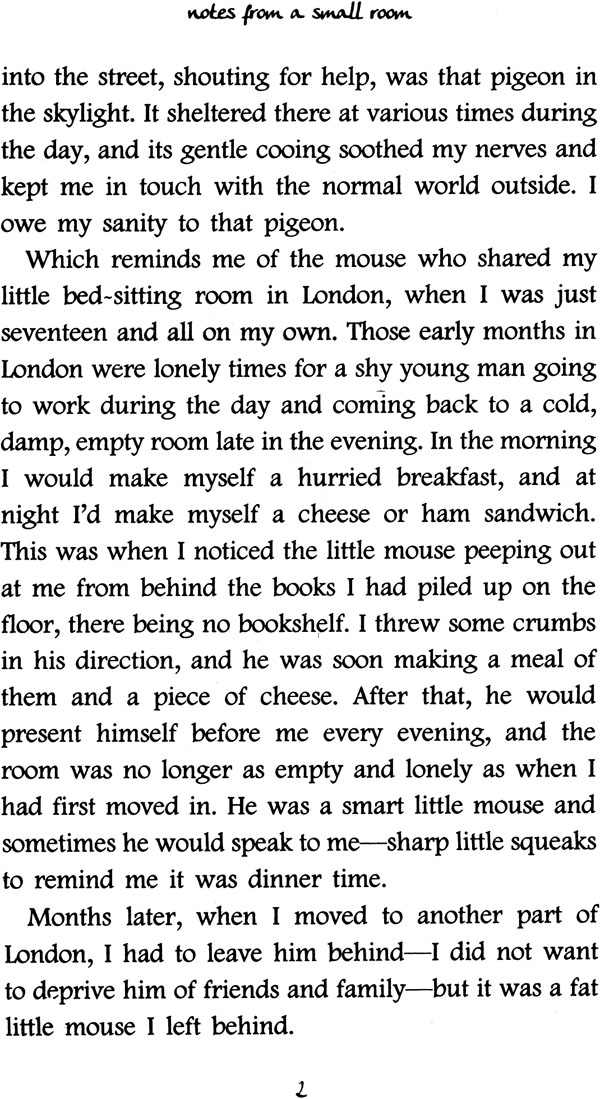 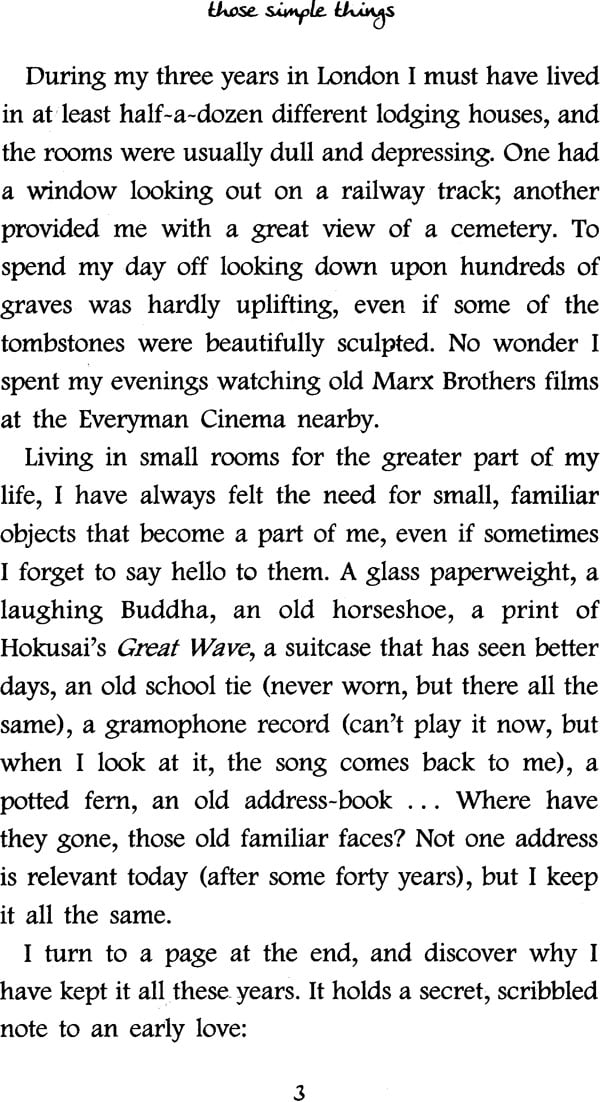 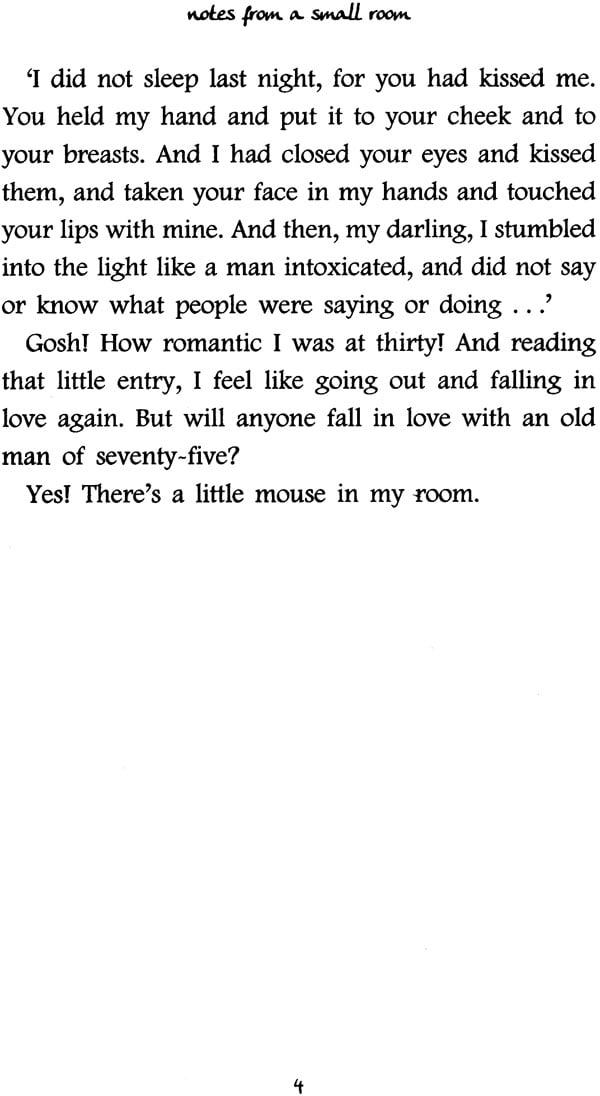 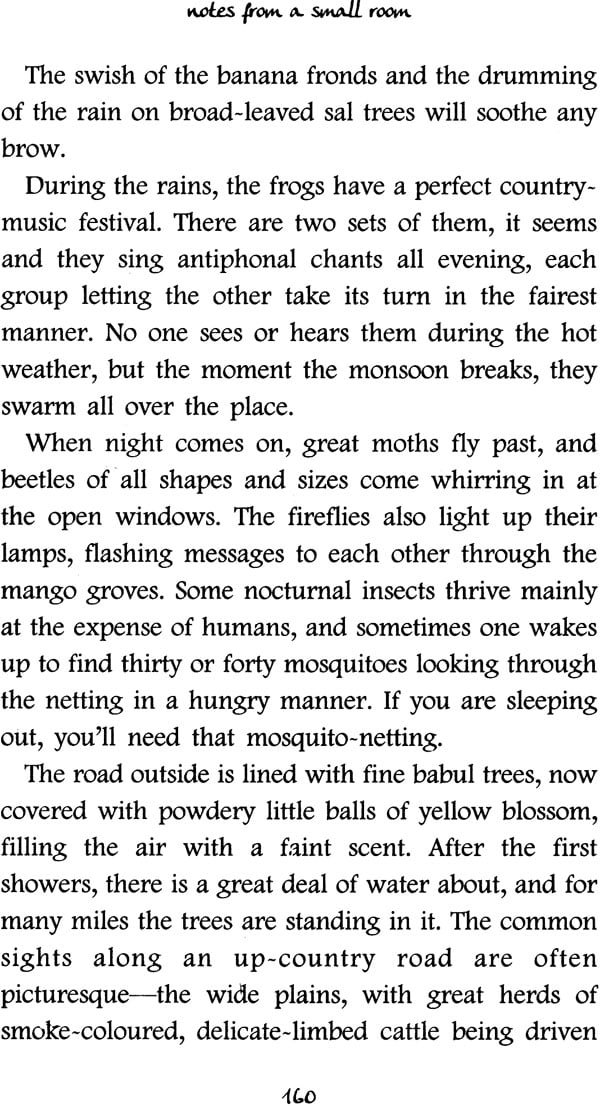 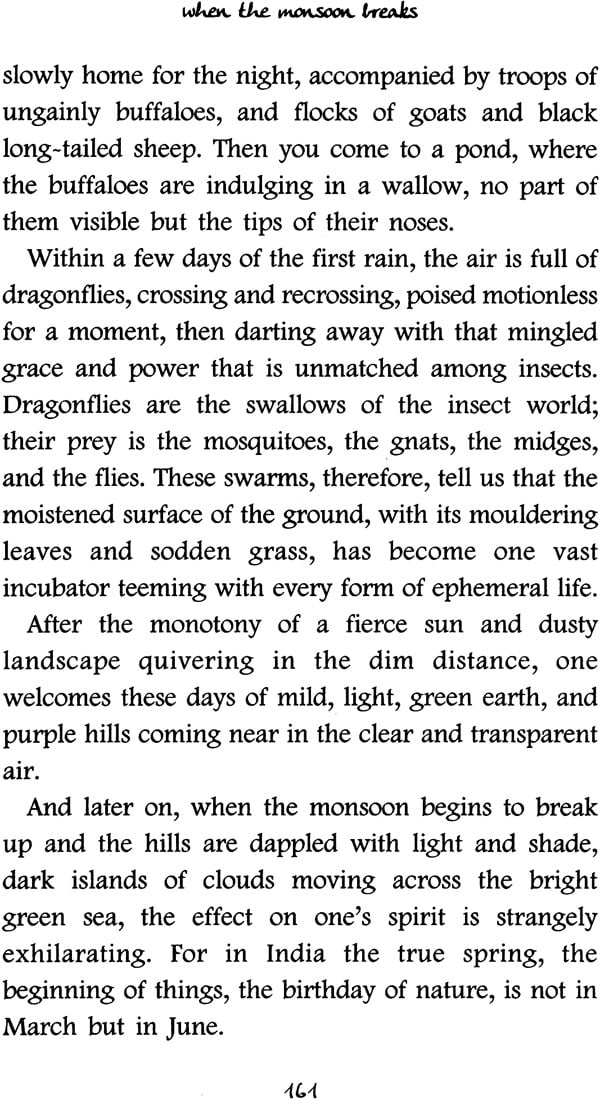 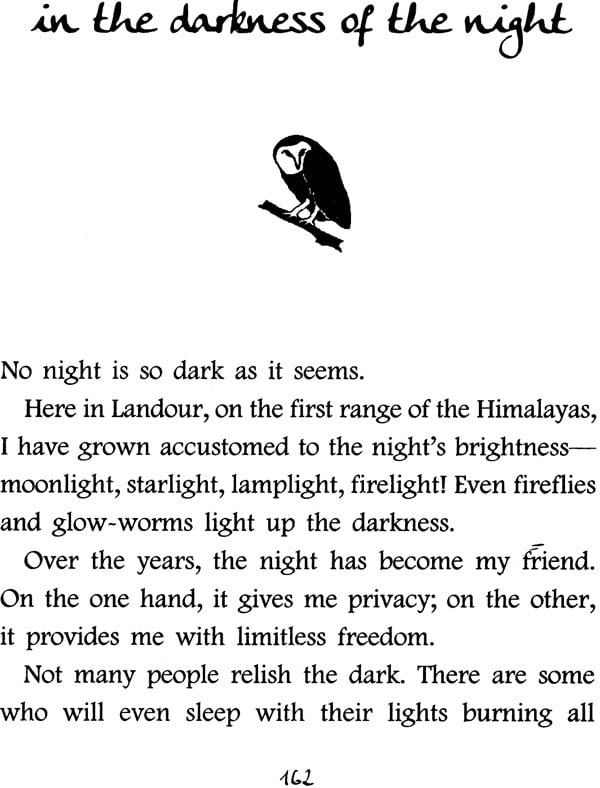 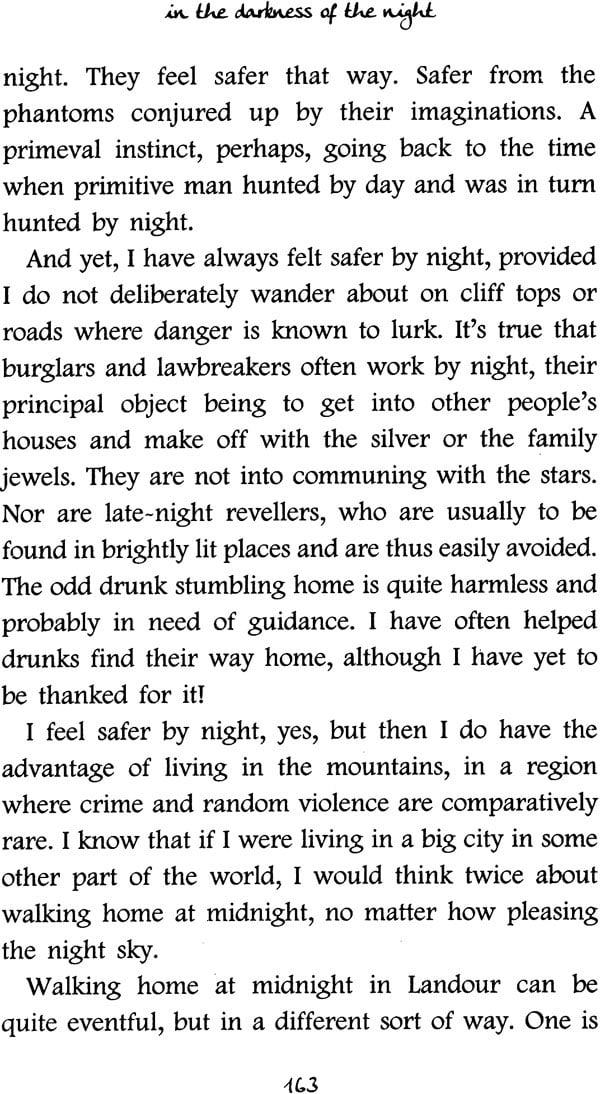 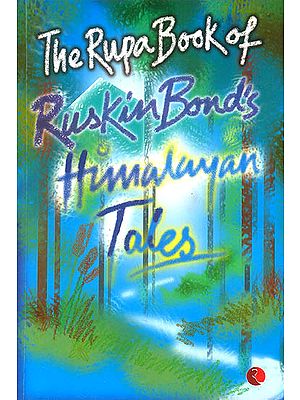 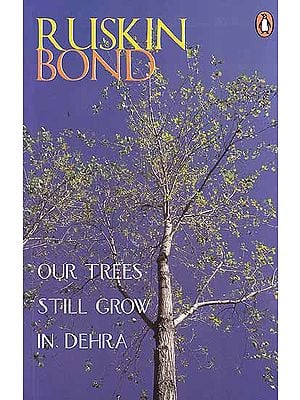 Ghost Stories from the Raj
By Ruskin Bond
$12

The India I Love
By Ruskin Bond
$12

All Roads Lead to Ganga
By Ruskin Bond
$13 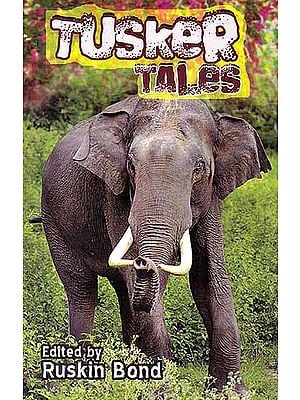 The Penguin Book of Classical Indian Love Stories and Lyrics
By Ruskin Bond
$19.20
FREE Delivery
$24  (20% off) 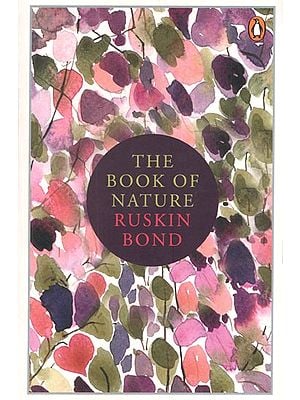