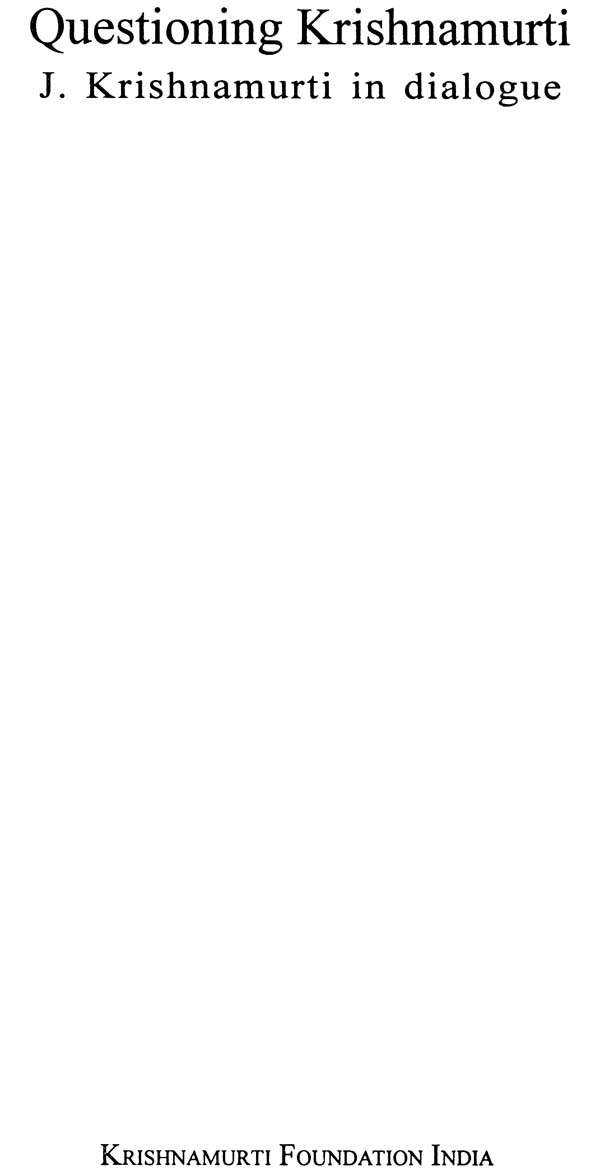 In his Foreword to the book, editor David Skitt says: 'For the first-time reader, the range and vocabulary of these conversations may seem daunting. Is this philosophy, Psychology, or religion? Or all three? Krishnamurti himself did not like giving a name to what he talked about. His agenda was very open-ended, always totally free to cover any aspect of the human condition. For Krishnamurti, a religious view of life is inseparable from exploring whether we mistakenly apply the biological model of evolution to the psychological sphere; and whether the computer is an accurate simultation of the human brain. For him, these are not incidentally but crucial issues that determine the quality of our lives, not just topics of intellectual interest.'

Both the life and teaching of Jiddu Krishnamurti (1895-1986) have aroused considerable controversy, ranging from adulation as a 'World Teacher', a twentieth-century Maitreya or Messiah, to the view that he was a fallible, if extraordinary, human being. Many who knew him felt overwhelmed, deeply awed even, by a sense of sacredness and unconditional love flowing from him. Others felt something of this, and a few also felt badly wronged or slighted, and have responded with a pained ambivalence. Even for those close to him for years, his personality has remained in some ways an enigma. But whatever the perhaps inevitable mystery of the person, the books, videos and tapes are there to show how for more than half a century Krishnamurti argued passionately that the problems facing us demand a radical transformation of human consciousness.

Was he asking the impossible? Did Krishnamurti undergo such a transformation himself? And if he did, what relevance does this have for the rest of us?

This book consists of fourteen conversations, in the last two decades of his life, in which these questions were debated. Those taking part include scientists, a Buddhist scholar, philosophers, artists and a Jesuit priest. None of them could be called 'devotees', but were people who came to question, clarify and challenge. This was something that Krishnamurti had in his lifetime always urged his listeners and readers to do - not perhaps always successfully.

A question that throbs like a pulse in this book is: can human beings live without conflict? Throughout these dialogues, Krishnamurti maintains that this can happen only when outer conflict, be it with another person or collectively in war, is seen to arise from inner conflict within the individual. The root of such conflict is a mistaken but powerful focus on 'what should be', rather than on 'what is', whether in ourselves or others. Or, to put it another way, ideals and objectives are insidiously found more attractive than looking at and understanding facts. Usually, if the fact - that which happens- is displeasing, our tendency is to resist, escape from, or suppress it. But this 'running away from the fact', as Krishnamurti calls it, is dangerous. By reacting in this way, he argues, we split off a fictitious but strong sense of self from what we experience, the 'observer' from the 'observed'. This separative self - which is a figment of thought based on inevitably limited experience, a kind of mental marionette - is for him the heart of violence, whether between two people or two nations. This is not, he contends, a problem that just a few unbalanced people have: the whole of humanity is caught in it.

The many implications of this key and difficult notion of 'the observer is the observed', sketched only very briefly here, are discussed in depth with David Bohm, a Fellow of the Royal Society and, like a few outstanding theoretical physicists, also a philosopher.

What then can be done? Instead of a plan of action, Krishnamurti invites the listener to 'remain with what is' in his or her life non-judgmentally, to test whether what is being experienced will then disclose and clarify its Significance. In so doing, he argues, we explore not just our own consciousness but human consciousness as a whole. This is not, therefore, 'neurotic, lopsided, selfish' introspection. We are instead 'observing without an observer', in which there is no movement of thought, no labelling, no justification, no condemnation, no desire to change, but a sense of affection and care. Nor is this some kind of mystical, or otherworldly, notion. At the end of the conversation with Asit Chandmal and David Bohm, Krishnamurti cites his own response at the time of his brother Nitya's death: 'there was absolutely no moving from that ... from that sorrow, that shock, that feeling ... K didn't go after comfort ... there is no other path except that.' Then another dimension of mind can come into play. The difficulties we may have in 'staying with' experience in this way are discussed with the American professor of philosophy, Renee Weber.

This is a clear instance of how Krishnamurtis 'teaching' goes to the heart of the kind of experience that we all share. He puts to us propositions about such experience, which he invites us not to accept but to test. In his dialogue with Bernard Levin, he castigates dogma and belief as blocks to understanding. It is by serious testing and experimenting - to see whether what is said is false or not - that we can find out the truth for ourselves. Any other way of evaluating reality, such as reliance on authority or scripture, he sees as turning us into 'second-hand people'.

As the reply to the final question in this book makes clear, Krishnamurti disclaimed any status as some kind of 'role model' for the rest of us. As he said in a talk in 1983, 'the speaker is speaking for himself, not for anybody else. He may be deceiving himself, he may be trying to pretend to be something or other. He may be, you don't know. So have a great deal of scepticism: doubt, question ... ' Not only did he disclaim such a role, he argued strongly that to seek any kind of exemplar, whether in himself or in anyone else, is psychologically crippling. By creating a childlike dependency, conformity, and a temporary, but ultimately false, sense of security in the authority of another, it 'atrophies the brain'. It is also religiously, and often politically, divisive, since the proliferation of such exemplars inevitably creates barriers for the 'faithful' between 'them' and 'us'. And like inner conflict, this dull subservience wastes the energy needed to explore and respond anew to an ever-changing reality - to the essence of life itself.

In most of these talks, these issues, including the discussion of death with the playwright and broadcaster Ronald Eyre, are treated with a passion and humour that the editor has tried but failed to adequately reproduce.

What Is of Most Concern to You?
Jonas Salk

Are You Not Saying What the Buddha Said?
Walpola Rahula and others

How Do We See That Which Is Most Real?
Eugene Schallert, S.J.

What Future Does Man Have?
David Bohm, FRS

Who Is the Experiencer?
Iris Murdoch

Is the Brain Different from a Computer?
David Bohm and Asit Chandmal

Is There an Eastern and Western Mind?
Pupul Jayakar

Is It Possible to End Fear?
Ronald Eyre

What Is Your Secret?
Bernard Levin

Can One Have Lucidity in this Confused World?
Huston Smith

Why is Your Teaching So Difficult to Live?
Renee Weber

What Is Meditation?
Chogyam Trungpa Rinpoche

How Can One Overcome the Despair of Bereavement?
Anonymous

Who Are You?
Anonymous 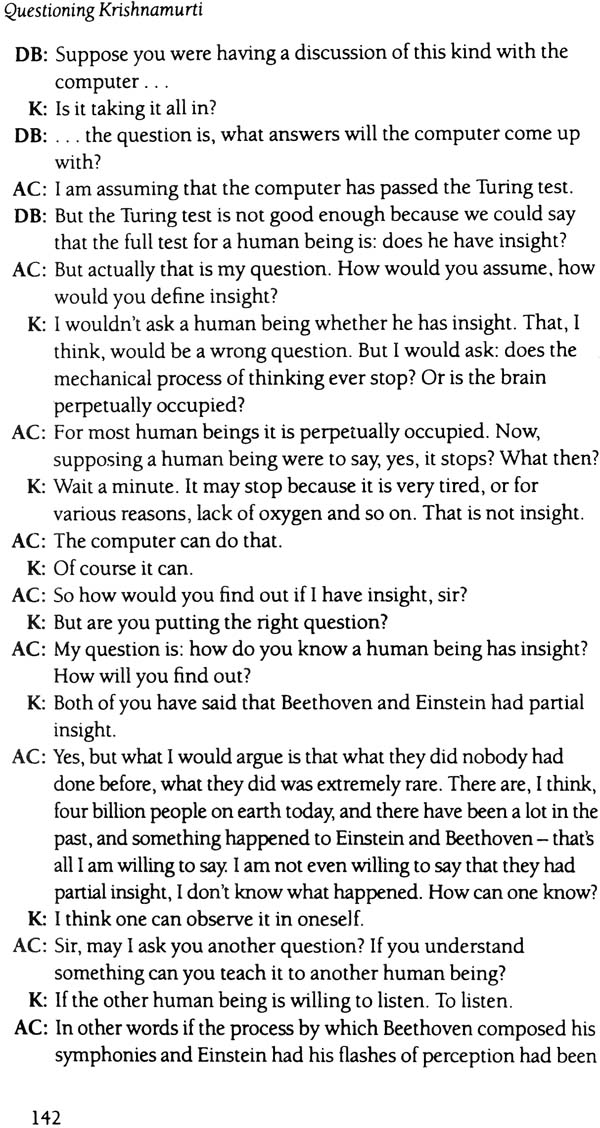