Reign of Rasa in Sanskrit Criticism

This book is a significant study on the Dhvanyaloka of Anandavardhana, the celebrated work on Sanskrit literary criticism.

I t was originally published by the Mangalodayam Press of Trichur in the year 1938 under the title 'Studies on Dhvanyaloka or Reign of Rasa in Sanskrit Criticism.' The author of the work is Sri P.S. Subbarama Pattar (1889-1977), a traditional Sanskrit scholar from Kerala.

Sri Pattar was honoured by the President of India for his erudition in Sanskrit in the year 1970.

The work is perhaps the first serious and systematic study in English on Dhvanyaloka.

We are extremely happy to bring out this volume named Reign of Rasa in Sanskrit Criticism as the 48th number in the Calicut University Sanskrit Series. It is a significant study on the Dhvanyaloka of Anandavardhana, the celebrated work on Sanskrit literary criticism. It was originally published by the Mangalodayam Press of Trichur in the year 1938 under the title 'Studies on Dhvanyaloka or Reign of Rasa in Sanskrit Criticism.'

The author of the work is Sri P. S. Subbarama Pattar (1889- 1977), a traditional Sanskrit scholar from Kerala. Sri Pattar was honoured by the President of India for his erudition in Sanskrit in the year 1970.

The work is perhaps the first serious and systematic study in English on Dhvanyaloka.

It is divided into two parts. In the first part, which is subdivided into ten sections - such as (i) opposition to dhvani, (ii) definition of dhvani, (iii) illustration of dhvani, (iv) defence of dhvani, (v) soul of poetry, (vi) classification of dhvani, (vii) dhvani and alankara, (viii) rasa as dhvani and as alankara, (ix) dhvani and slese, and (x) minor topics of dhvani - the author gives a brief but profound critique on the epoch making text Dhvanyaloka. Analyzing all the seminal aspects of the text, he concludes that a critical study of Dhvanyaloka of Ananda in comparison with the works of his predecessors, will comprehend a survey of the whole field of Sanskrit literary criticism in all its aspects.

In the second part, he tries to establish that the sole purpose of Anandavardhana in writing Dhvanyaloka is to enunciate a new theory - the theory that the supreme source of aesthetic delectation as well as the ultimate end of poetry is realization of Rasa-s.

He argues that the nucleus of this theory is contained in the five couplets (karika-s) of the third chapter (udyota) of the Dhvanyaloka (10-14) and is 'illustrated by the whole treatise, particularly by the third chapter.'

He summarises the theory as follows: 'It is by the Rasa and Rasa alone the poetry lives. And it is only the realization of Rasa that the soul of sahrdaya meets the soul of poet. It is the Rasa that sets the heart of the poet to break out in the melodious music which touches the finest chord of the sahrdaya and makes it vibrate in the delightful harmony with that of the poet. This meeting of the soul with soul in disinterested love, this communication of the heart unto heart through spiritual sympathy, is the ultimate end of poetry and it can be accomplished by nothing but a perfect representation and realization of Rasa-s.'

In order to establish that this theory reigns supreme in the field of literary criticism he analyses the views of western critics like Aristotle, Butcher, Ben Johnson, Dryden, Mathew Arnold, Coleridge, Abercrombie, Hudson and William Blake. And for illustrating his views and arguments he cites examples from the classics of both Indian and western origin.

It is sad that this significant work did not get notice and acclamation of the scholarly world, it richly deserves.

The fact that Sri Subbarama Pattar wrote this serious study on Dhvanyaloka when a good edition (not to speak of a critical one) of it was not available enhances the value of the work.

Sri Subbarama Pattar was a master of Sanskrit grammar and poetics who wrote profusely in chaste classical Sanskrit on wide range of topics. His erudition on Vyakarana and Sahitya can be seen in the versified summaries of the theory of sphote and the different interpretations of rasasutra which is appended to this study on Dhvanyaloka.

We thank Dr. K.V. Vasudevan, Professor, Sreekrishna College, Guruvayur who provided us a copy of Mangalodayam edition of the work.

We thank Smt. Narayani Ammal, wife of Sri P. S. Subbarama Pattar for having given consent to publish this significant work through Calicut University Sanskrit Series. Sri R. Venkatakrishnan (Mumbai), Smt. Narayani Ammal's nephew also deserves special thanks for extending all necessary support in this regard.

I am sure that the scholarly would receive this volume with great enthusiasm and fervour.

I express our deep sense of gratitude to Sri. Omprakash. V, the Publication Officer and Smt. Laly Francis. K., Lay out Designer for bringing out this volume promptly.

(To the Mangalodayam Edition (1938) given by the author) In the field of Sanskrit critical literature there are two profound works which deserve to be studied on the lines on which the Poetics of Aristotle was studied by Mr. Butcher about forty years ago. One of them is the Natya Sastra and the other is Dhvanyaloka. The one, if studied in comparison with the ancillary sciences of music and dancing, will throw a flood of fresh light on the science of dramaturgy and the art of histrionics. The other will give us a new insight into the various problems connected with literary criticism. This modest attempt is to make a study of the latter though it has no pretensions to the profundity or thoroughness with which the admirable treatise of the Greek philosopher was examined by the English critic.

I have not yet come across such a systematic study of the work and as far as my information goes this is the first attempt in the direction. In the first part of this study I have examined the various topics of Dhvani more from a technical point of view showing here and there some new relation of facts and tracing the history of the different theories in their genesis and growth. But in the second part may be found some originality both in the subject-matter and its presentation. The explication of the theory contained in the five couplets of Anandavardhana (Chapter III, Karikas 10-14). I claim to be my original exposition, whatever be its critical value.

In his Sanskrit Drama Prof. A.B. Keith remarks that there is pedantry in the theory of sentiments (page 326). This observation, in my opinion, betrays a lamentable lack of sympathetic appreciation, on the part of that distinguished orientalist, of the true value of the theory of Rasa and an undue estimation of plot and such other elements of poetry. I have attempted to show, therefore, in the second part of this study that only Rasa-s can be the ultimate source of aesthetic delectation and plot and characterization contribute only to the development of sentiments. If any critical doctrine has ever endeavoured successfully to analyse the emotional effect of poetry it is the theory of Rasa and Anandavardhana is at his best when he expounds and demonstrates the aesthetic significance of that theory.

As the main object of this study is the exposition of some outstanding problems of a work I have refrained from dealing with any chronological question of controversy in it. But I have followed, wherever necessary, the chronological order in which I have been guided by The History of Sanskrit Poetics by Dr. S.K. De and Rasa and Dhvani by Dr. A. Sankaran. I have taken for granted or rather held with some scholars that the authors of the Karikas and the gloss are identical. I have not thought it necessary to enter into a discussion about or make an inquiry into the problem, thinking that it is not within the scope of this study which is entirely expository.

It is highly regrettable that a correct edition of such a valuable work is not yet available for the literary world. The difficulty arising out of such a want is all the more forcibly felt by a student who undertakes a serious inquiry into the work. The available edition of the treatise and its commentary, far from being correct, is replete with misprints and other errors of editing. Besides, the numerous readings of the text as well as the annotation, very often at variance with each other, are indeed a handicap in his endeavour, though these deficiencies in his equipment will eloquently plead for him and procure and excuse of his faults from the erudite reader.

I have not been able to make this study as thorough as I would desire. But I have tried to make the best use of whatever material I could lay my hands on. The grammarian's theory of Sphota, on which the doctrine of Dhvani is based, has been summarized in the Appendix. I have not specified the pages of the original wherever I have made a free translation of the passages of Dhvanyaloka. I must crave the pardon of the reader for merely pointing out the references of authorities in the foot-notes instead of quoting them in full so as to save the trouble of referring to the various works. I have also to add, by way of an apology to the reader, that I have not been able to obtain the facility for using the diacritical marks in print. In conclusion, I must acknowledge my grateful thanks to Rev. J. Palocaren, M.A. (Edin.), Principal St. Thomas College, Thrissur, for kindly allowing me to make use of the college library in my studies. 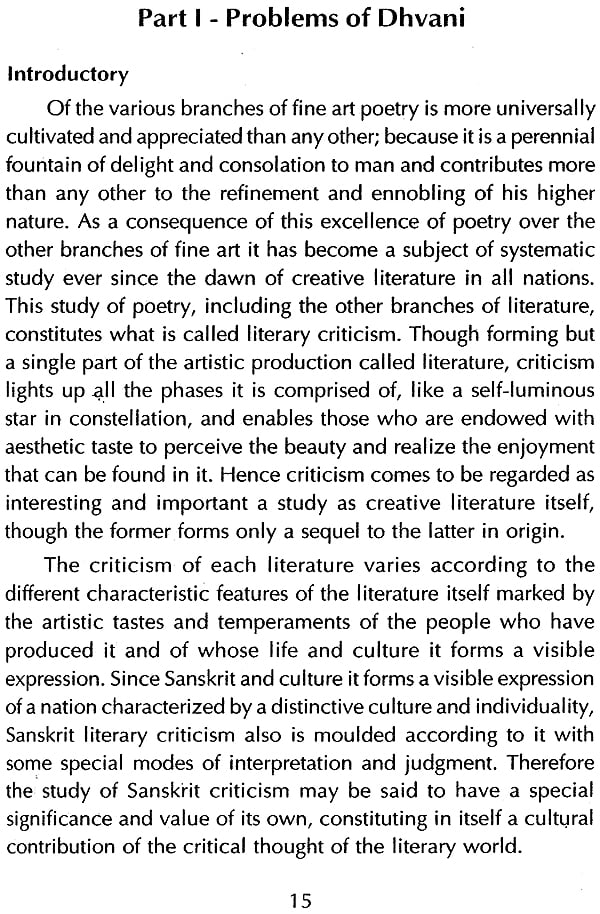 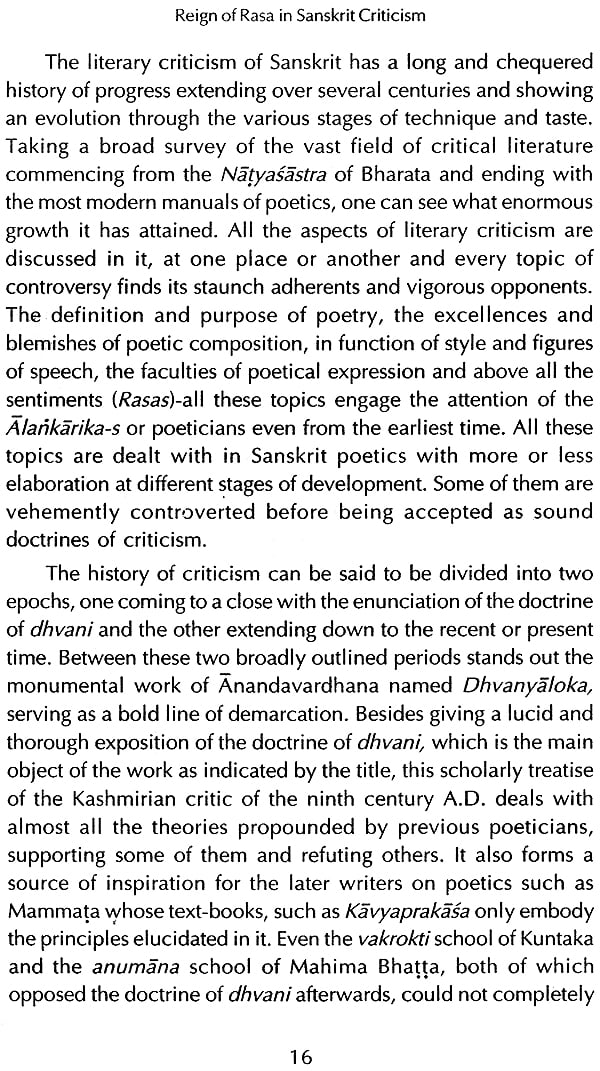 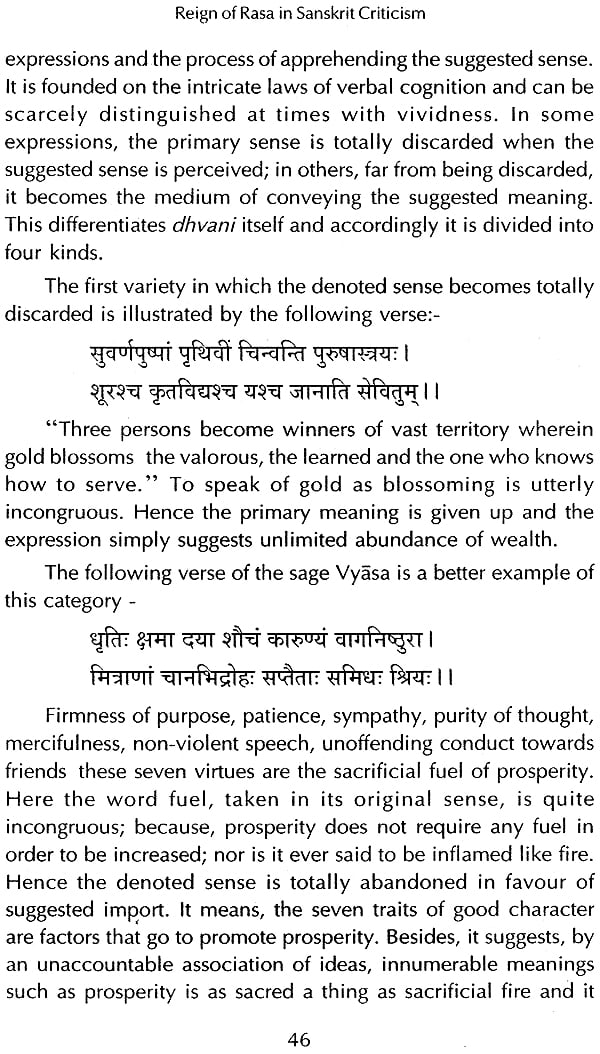 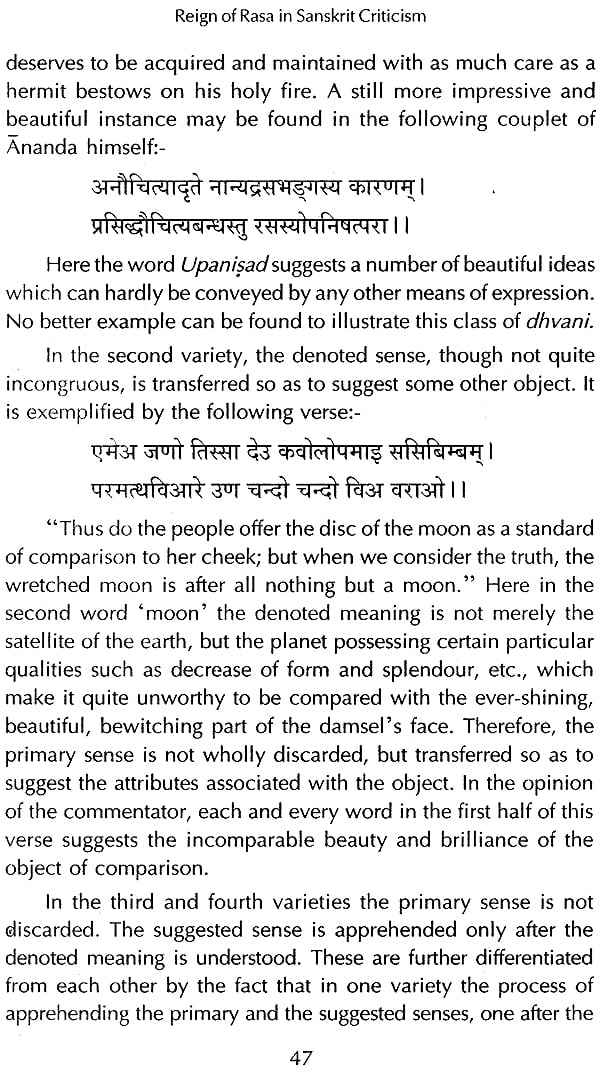 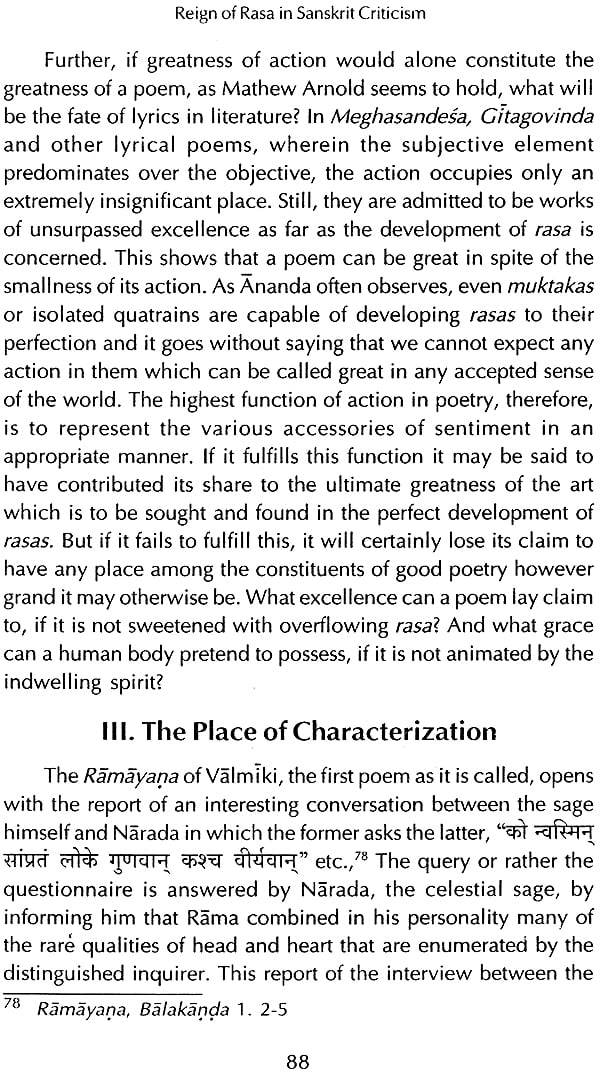 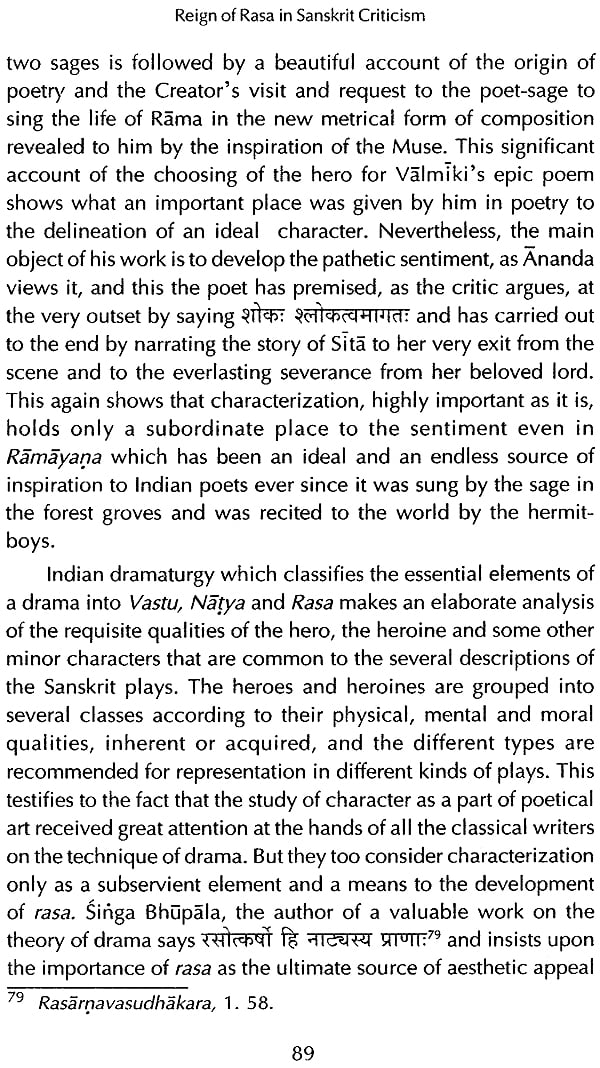 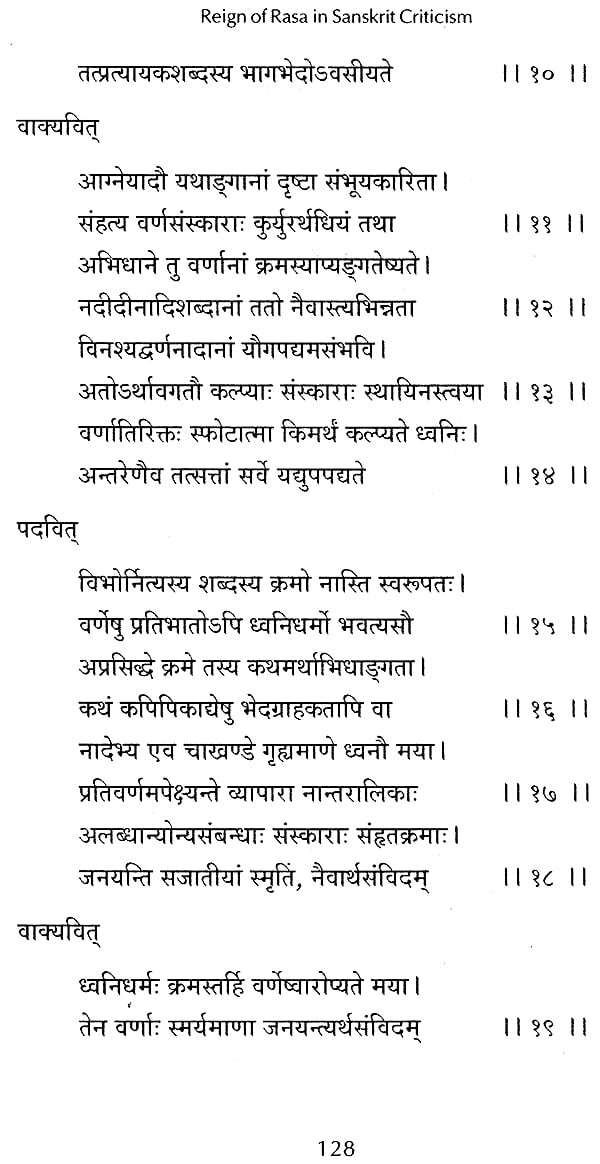 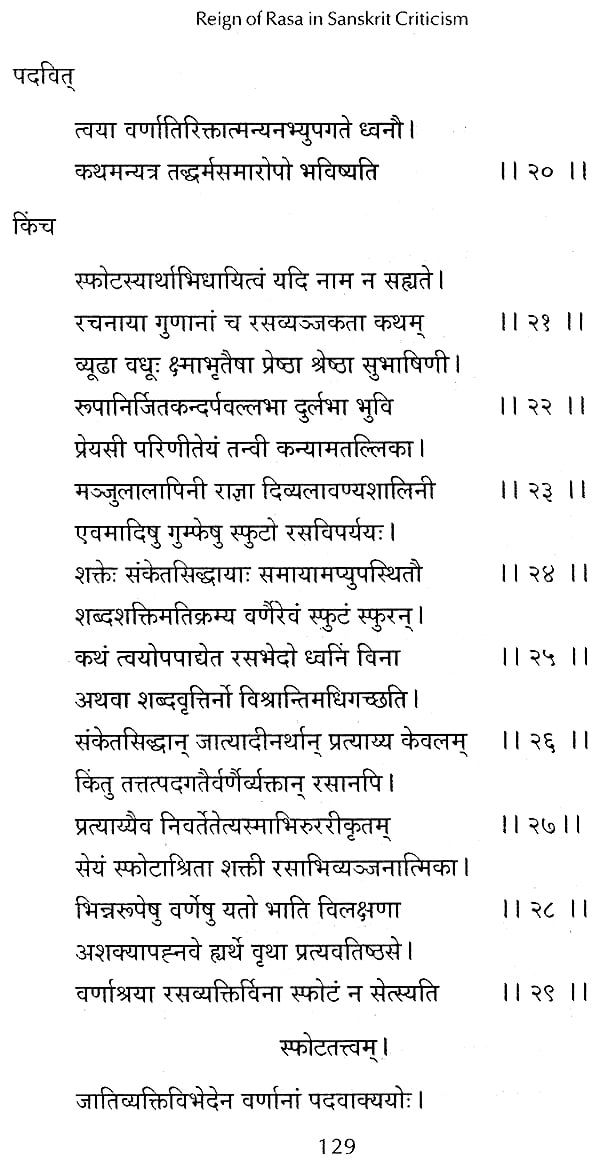 The Concepts of Rasa (With Special Reference to Abhinavagupta)
By S.C. Pande
$31
FREE Delivery