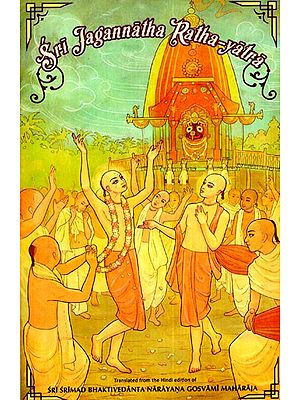 Each year in Purī, India, more than one million people attend the ancient Festival of the Chariots, or Ratha-yātrā, and many more view it from other places in India and around the world. Still, the deep significance of Ratha-yātrā, being most confidential, is not widely known.

Each year in Purī, India, more than one million people attend the ancient Festival of the Chariots, or Ratha-yātrā, and many more view it from other places in India and around the world. Still, the deep significance of Ratha-yātrā, being most confidential, is not widely known. This book is rich with this significance, revealing Ratha-yātrā in light of the esoteric moods and teachings of Śrī Caitanya Mahāprabhu.

Srī śrīmad Bhaktivedānta Nārāyaṇa Gosvāmī Mahārāja appeared in a Vaisnava family in Bihar, India, in 1921. In 1946, he took initiation from his gurudeva, Śrī Śrīmad Bhakti Prajñāna Keśava Gosvāmī Mahārāja, and became absorbed in the lofty tenets of Gaudīya Vaisnavism, which are permeated with deep philosophical truths. It is therefore not surprising that his revelation of Sri Ratha-yātrā is suffused with this sublime

We forever offer our heartfelt obeisance at the divine lotus feet of our most worshipful Śrīla Gurudeva, nityā-līlā pravista oỉ vişnupāda paramahaṁsa aștottara-sata śrī Śrīmad Bhaktivedānta Nārāyaṇa Gosvāmī Mahārāja. By his causeless mercy and inspiration, we are able to offer to him this English translation of his Hindi edition of Śrī Jagannātha Ratha-yātrā.

Yearly, between 1997 and 2002, as he traveled the world, Śrīla Gurudeva would give English classes regarding Ratha-yātrā, coinciding with the time of the festival in Purī. These classes were transcribed and published in a book entitled, The Origin of Ratha-yātrā.

As described in the Introduction, in 2009, Śrīla Gurudeva had The Origin of Ratha-yātrā translated into Hindi. He adjusted the text to increase the focus on the moods and conceptions of Śrīman Mahāprabhu at the time of Ratha-yātrā. He added more text to some sections of the translation from English and removed text from other sections, publishing the new volume under the title of Śrī Jagannātha Ratha-yātrā. The book you now hold in your hands is a translation of that Hindi edition.

In presenting this book in English, our foundational text was The Origin of Ratha-yātrā, which we compared to the Hindi Śrī Jagannātha Ratha-yātrā. Where the English and Hindi text were similar, a fidelity check was done and the English text was adjusted. Where large portions of text were added, a translation was required. All footnotes are by Śrī Śrīmad Bhaktivedānta Nārāyaṇa Gosvāmī Mahārāja except where otherwise noted.

By the causeless compassion and inspiration of my most worshipful śrīguru-pāda-padma, nitya-līlā pravista om vişnupāda astottara-sata śrī Śrīmad Bhakti Prajñāna Keśava Gosvāmī Mahārāja and for his pleasure, Śrī Jagannātha Ratha-yātrā is being presented before the readers of the Hindi language. Because of this, I am experiencing boundless joy.

Śrī Caitanya Mahāprabhu initiated the custom of cleaning Gundicā Mandira the day before Ratha-yātrā, thereby making the festival last for ten days. During this time, festivals such as Netrotsava (or Angarāgotsava'), Pāņdu-vijaya?, Ratha-gamana?, Herā-pañcamī4, and many others are celebrated. 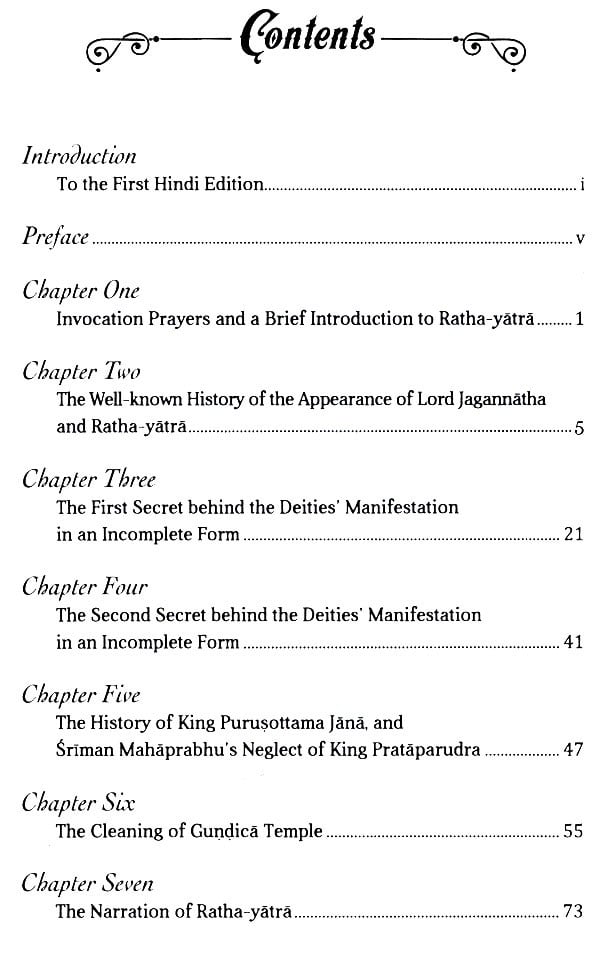 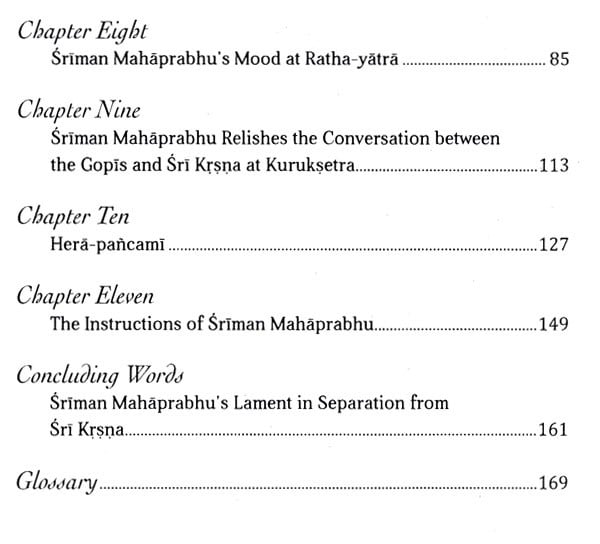 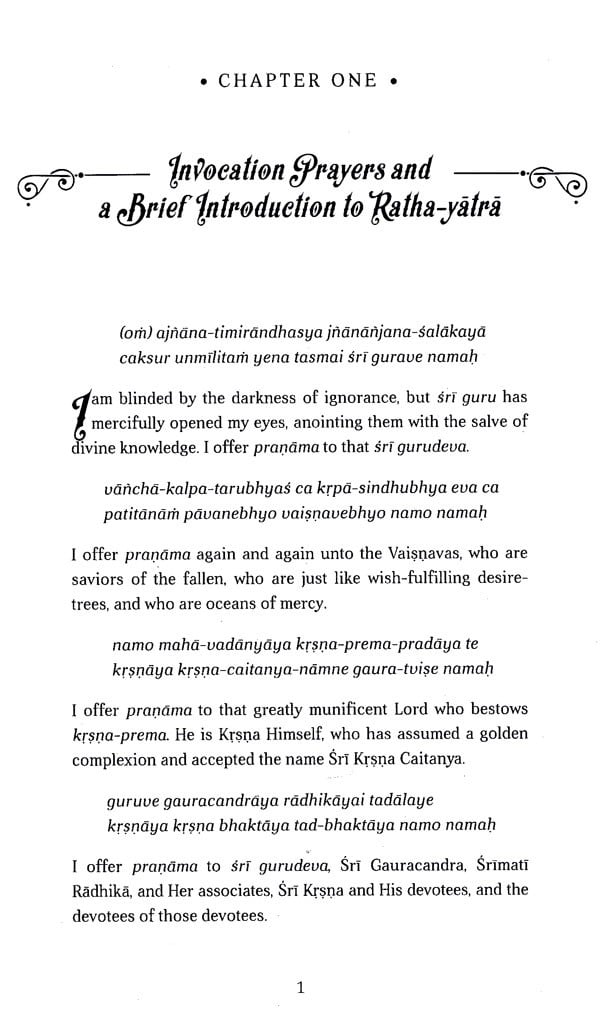 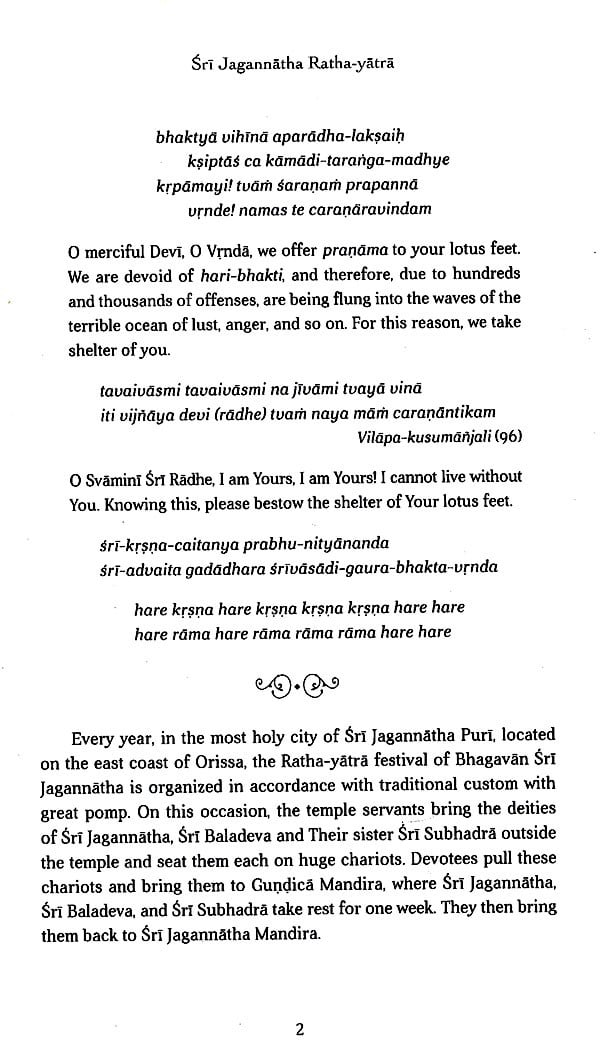 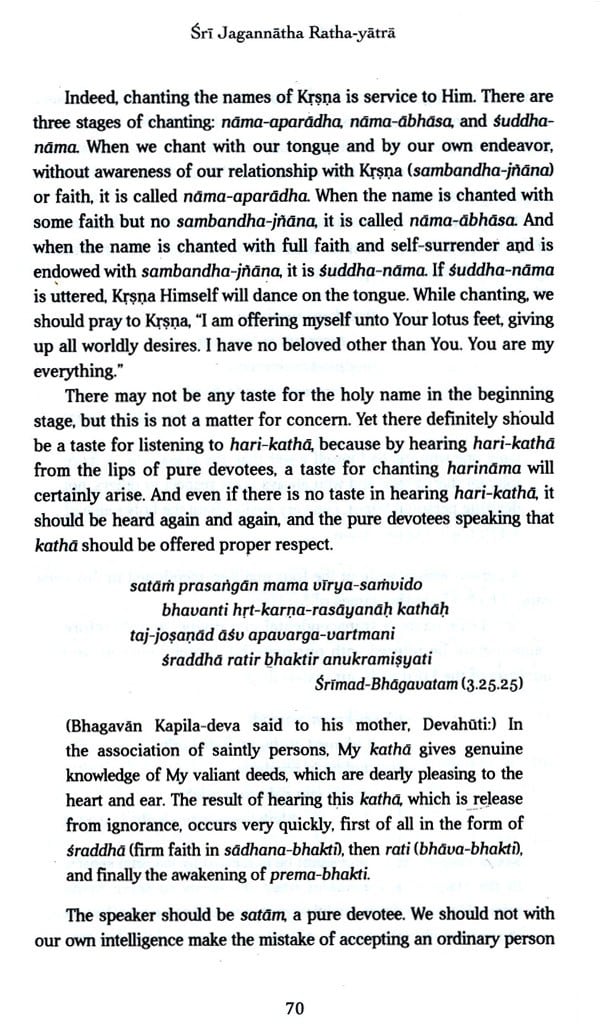 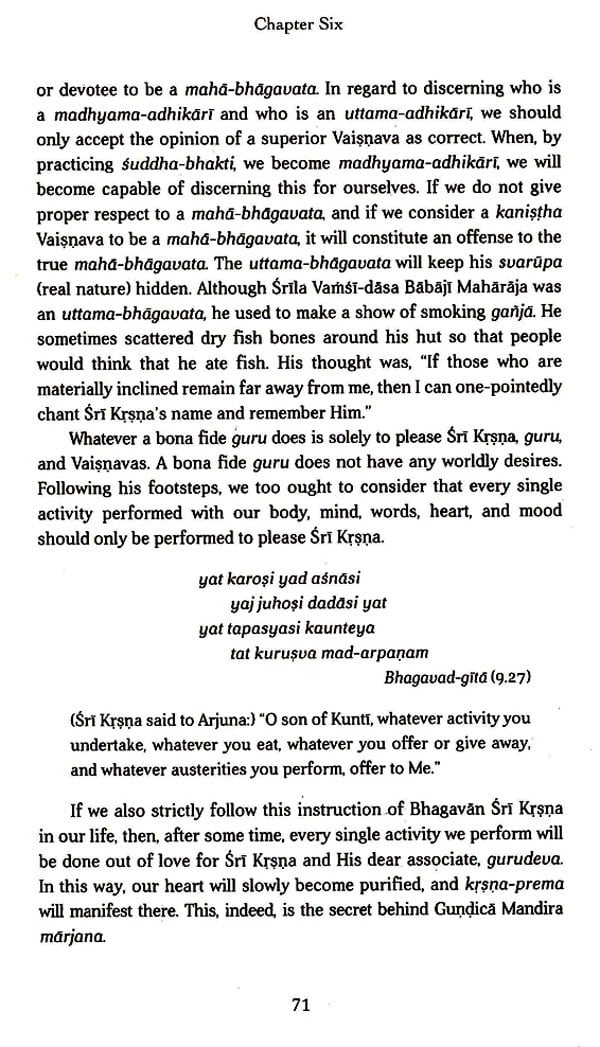 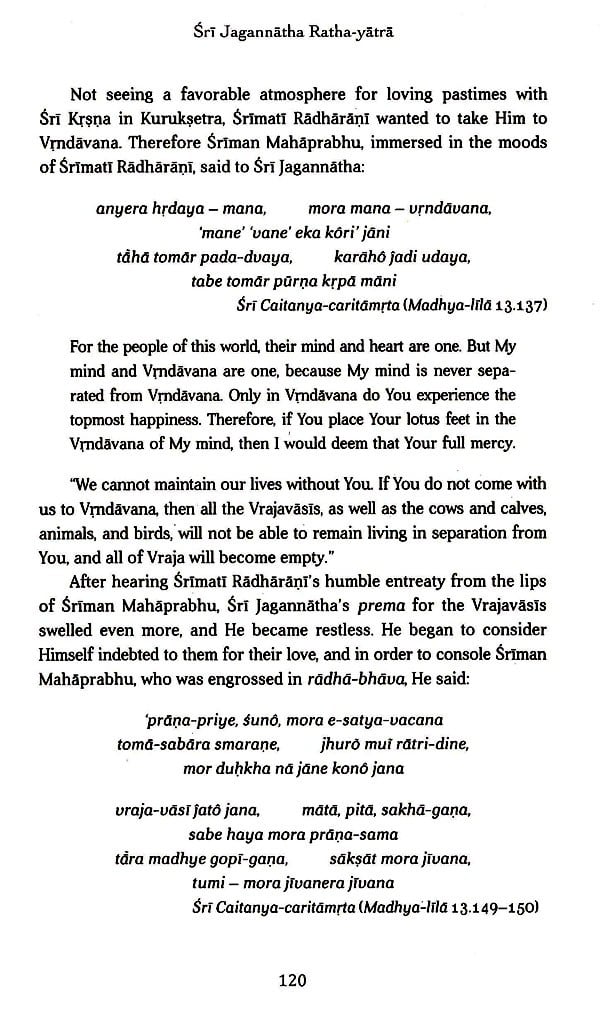 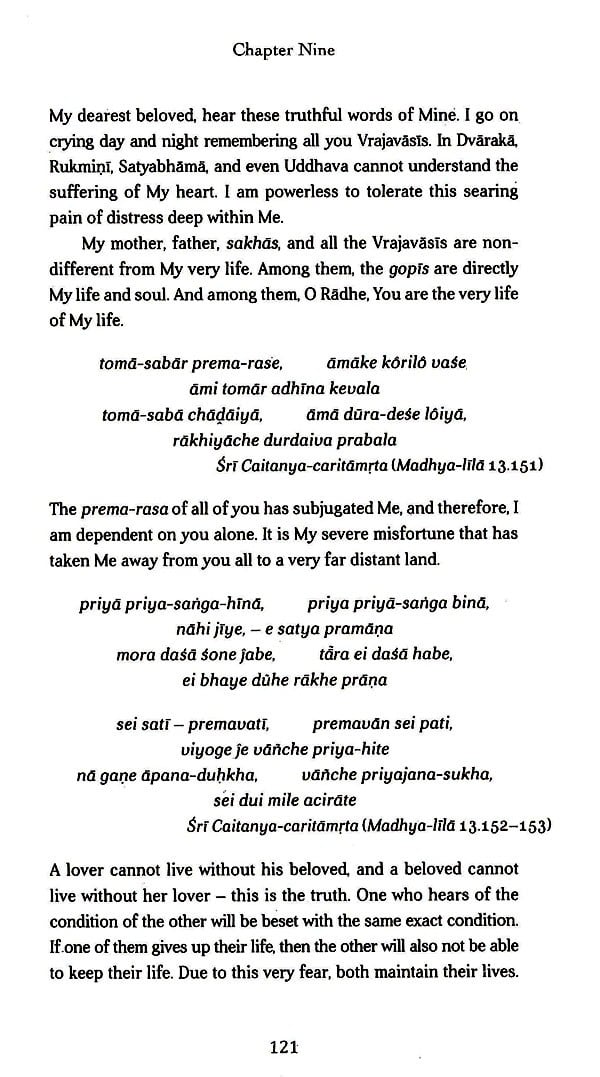 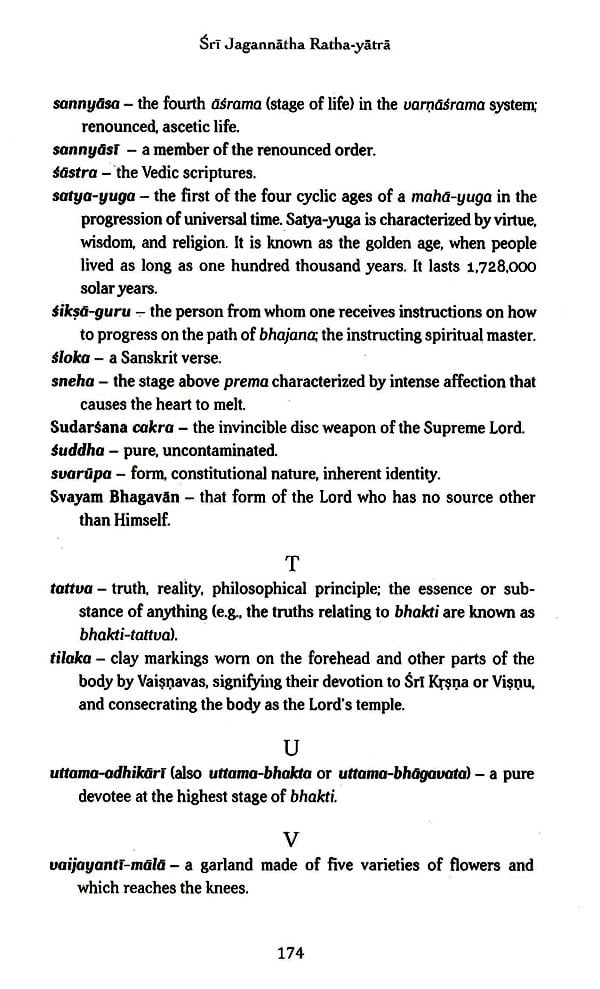 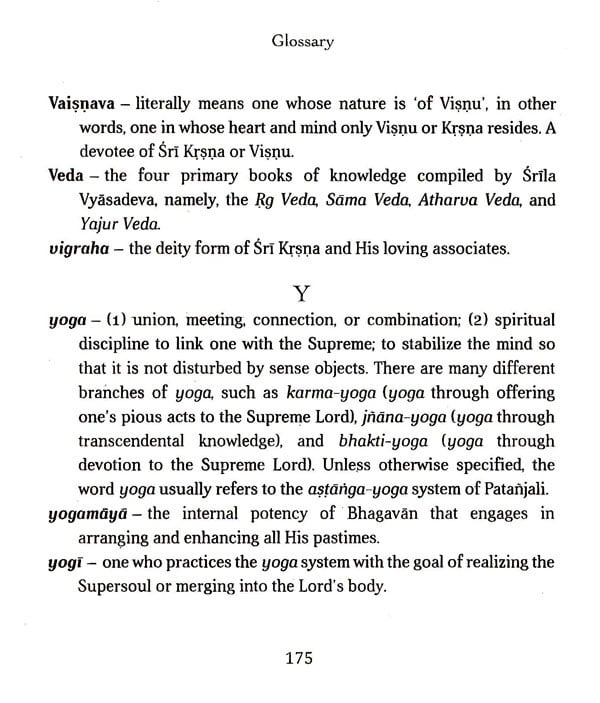