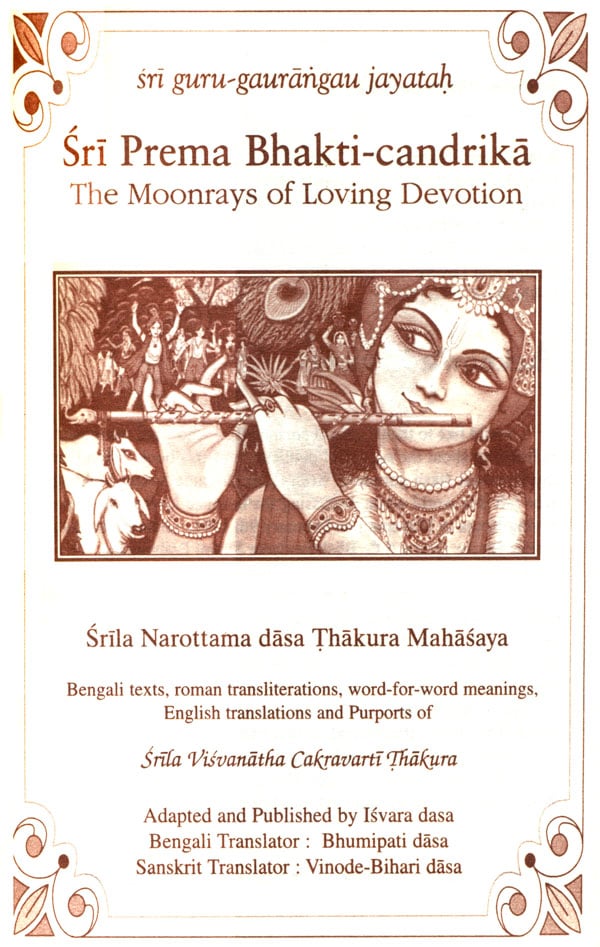 Prema Bhakti-candrika is known as sri rupanuga-gita as it contains the essence of all the teachings of Lord Caitanya Mahaprabhu. Prema Bhakti-candrika literarily means, the rays of the moonlight of loving devotional service to Lord Krsna. These rays of the moonlight of Prema-bhakti are so soothing that they cool down the effects of the burning fire of material existence, and they enable the conditioned soul to drink the nectar of loving devotional service of Sri Sri Radha Krsna.

The personality and mission of Lord Caitanya Mahaprabhu was summarized by Srila Svarupa Damodara Gosvami in the following sloka:

"May that Lord, who is known as the son of Srimati Sacidevi, be transcendentally situated in the innermost chambers of your heart. Resplendent with the radiance of molten gold, he has appeared in the age of Kali by His causeless mercy to bestow what no other incarnation has ever offered before, the most sublime and radiant spiritual knowledge of the mellow taste of His service.

This unnatojjvala-rasa, or the condensed elevated mellows of devotional service is the real hankering of the followers of Srila Rupa Gosvami, who are known as rupanugas. What makes the followers of Srila Rupa Gosvami so unique? Srimati Radharani has unlimited sakhis headed by Lalita devi and Visakha devi. These sakhis are in the same age group as Srimati Radharani. Thus they sometimes have direct dealings with Lord Krsna. The sakhis facilitate the pastimes of Radha and Krsna, and sometimes "Srimati Radharani arranges that Her friends have direct union with Krsna. However the direct maidservants of Srimati Radharani are the manjaris; manjari means "bud, young, or very tender". The manjaris are young and innocent girls. Their ages not more than that of a thirteen years old. They are the exclusive maidservants of Srimati Radharani. The unique position of the manjaris is that they are allowed to witness the intimate loving pastimes of Radha and Krsna in the inner chambers of the groves of Vrndavana, and render personal service there, to which the sakhis have no access. Thus they relish the unparallel bliss of bhakti-rasa. One of the principal manjaris is Sri Rupa Manjari, who incarnated as Srila Rupa Gosvami in gaura-lila. Srila Narottama dasa Thakura composed a very beautiful song in praise of the dust of the lotus feet of Sri Rupa Manjari. This song is in the prarthana as follows; sri Rupa manjari pada sei more sampada sei mora bhajana pujana. Rupanuga bhajana means following the footsteps of Srilla Rupa Gosvami, is to become a maidservant of Srimati Radharani. Srimati Radharani's love for Krsna is so intense that Krsna is maddened by it and so accepts the form of Lord Caitanya Mahaprabhu in order to understand and relish the love of Himself.

The Gosvamis carried out the instructions of Lord Caitanya Mahaprabhu by writing volumes of devotional scriptures such as: Sri Brhad-bhagavatamrta, Bhakti-rasamrta-sindhu, Ujjvalla-nilamani, Hari-bhakti-vilasa, Lalita-madhava, Vidagdha-madhava, Sat-san-darbhas, and others. Srila Krsnadasa Kaviraja Gosvami then took the essence from these writings, and presented it to the world in the form of Sri Caitanya-caritamrta.

Srila Narottama dasa Thakura studied along with Srinivasa Acarya and Syamananda Prabhu under Srila Jiva Gosvami. Thereafter, the famous trio were ordered to broadcast the writings of the Gosvamis in Bengal.

This present English edition of Sri Prema Bhakti-candrika is perhaps the most complete so far. There are some other translations, but they have not been as comprehensive as this edition. In this edition, it is our fortune that we include a short commentary by Srila Visvanatha Cakravarti Thakura. There are a few commentaries on Sri Prema Bhakti-candrika, but the most authoritative are those composed by Srila Radha Mohan dasa, a grandson of Srila Srinivasa Acarya, and by Srila Visvanatha Cakravarti Thakura.

As a publisher of this book, Sri Prema Bhakti-candrika, I am simply a beggar of the mercy of Srila Narottama dasa Thakura. I hope that this presentation to the English speaking world will enhance and nourish the reader's progress in the development of love of Krsna. 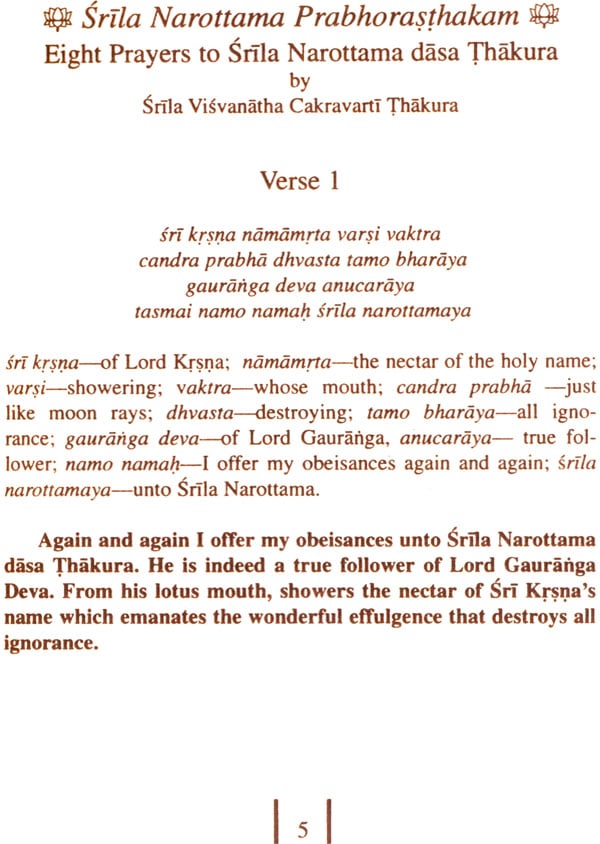 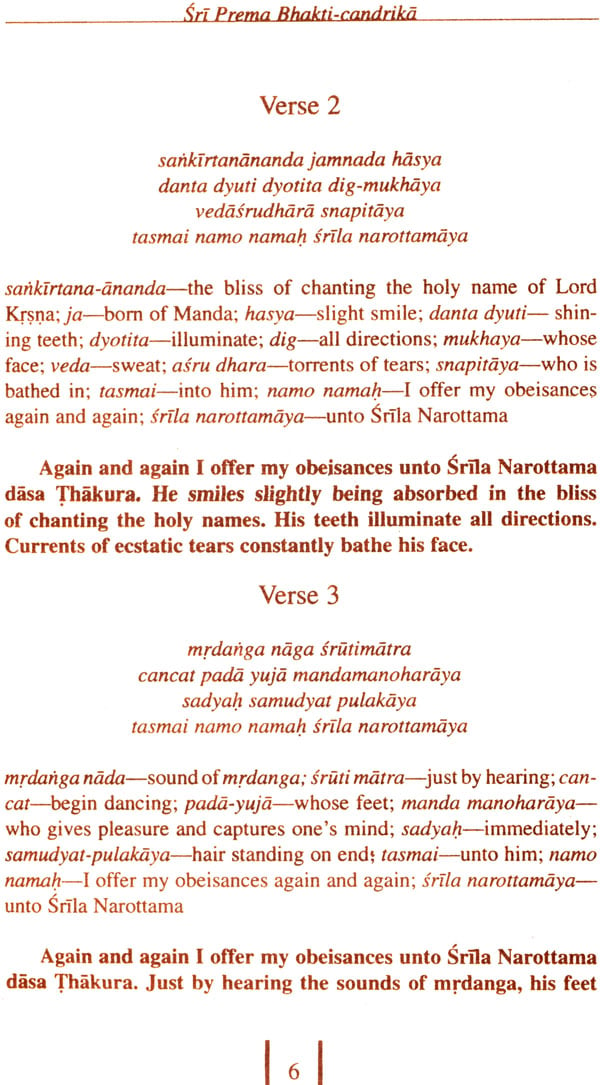 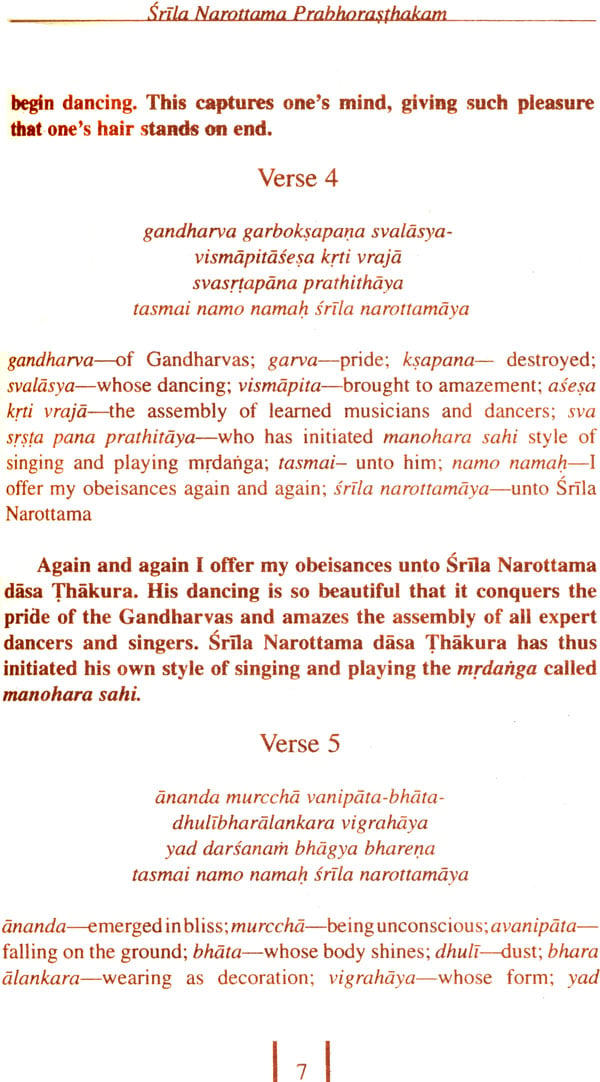 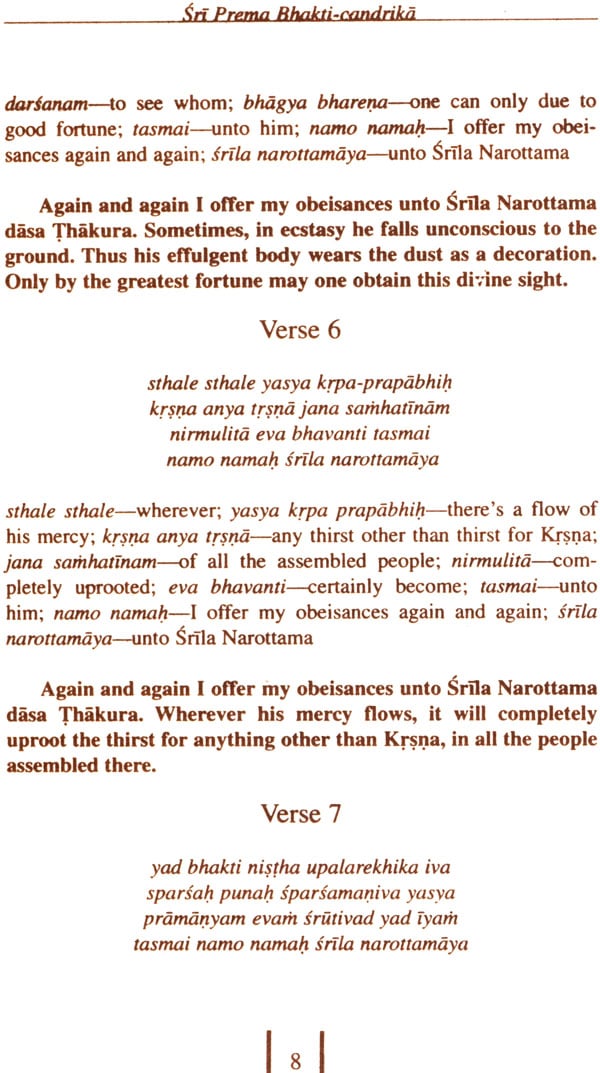 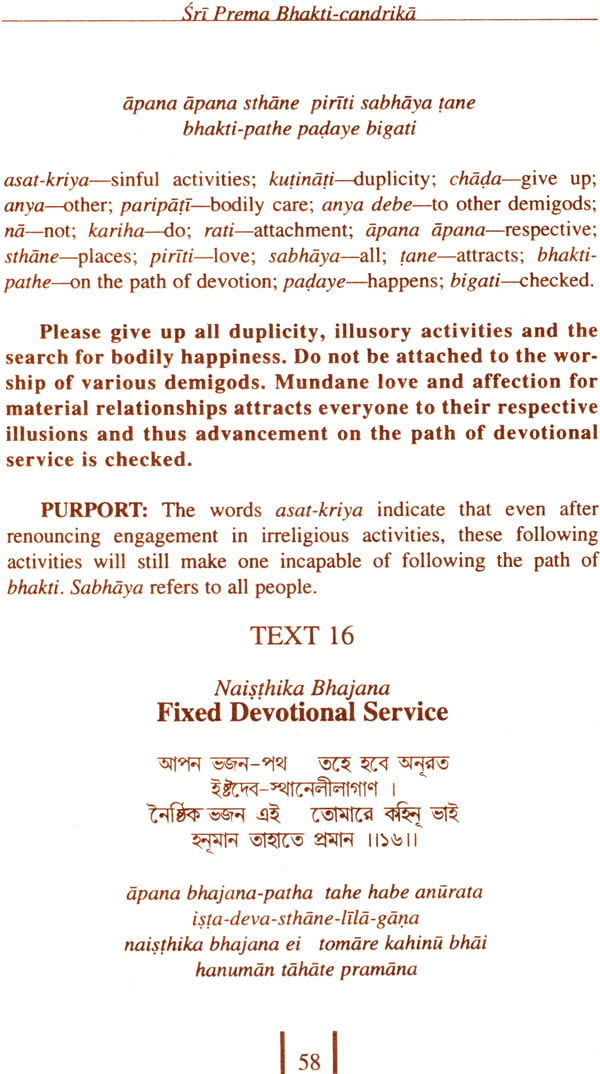 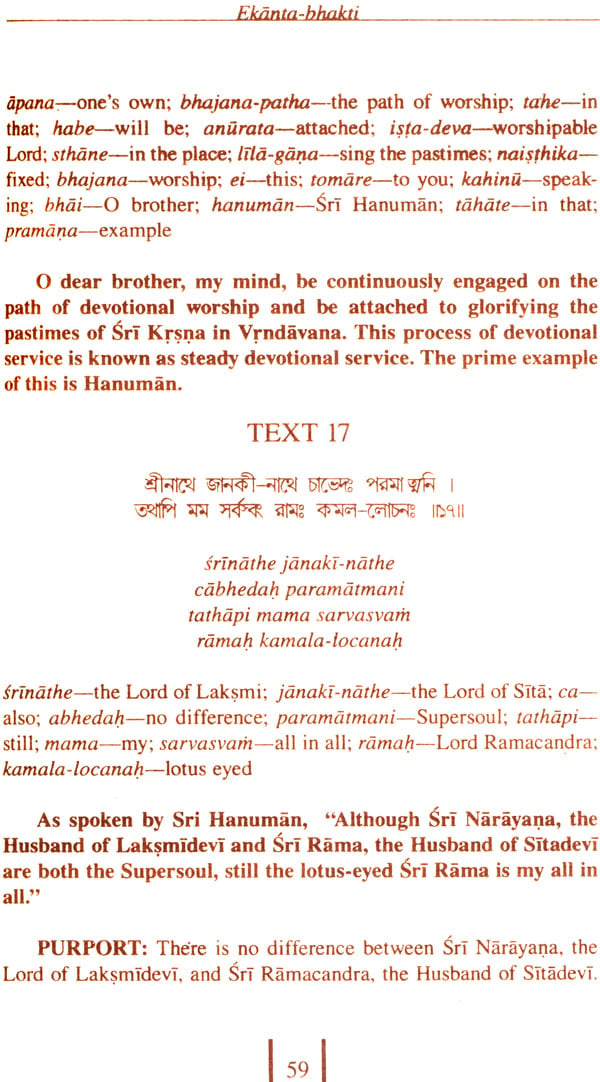 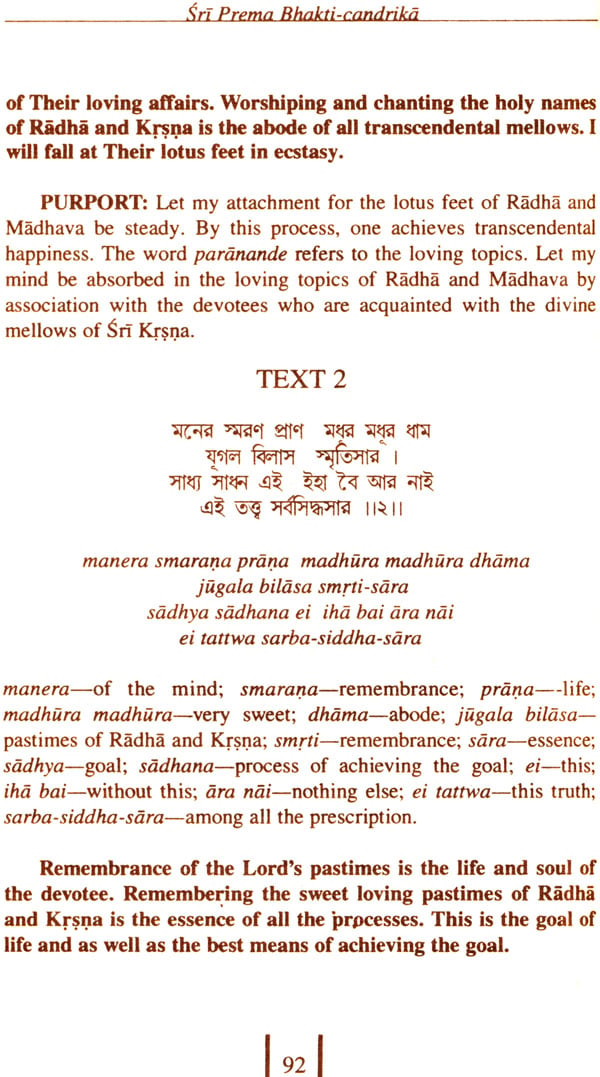 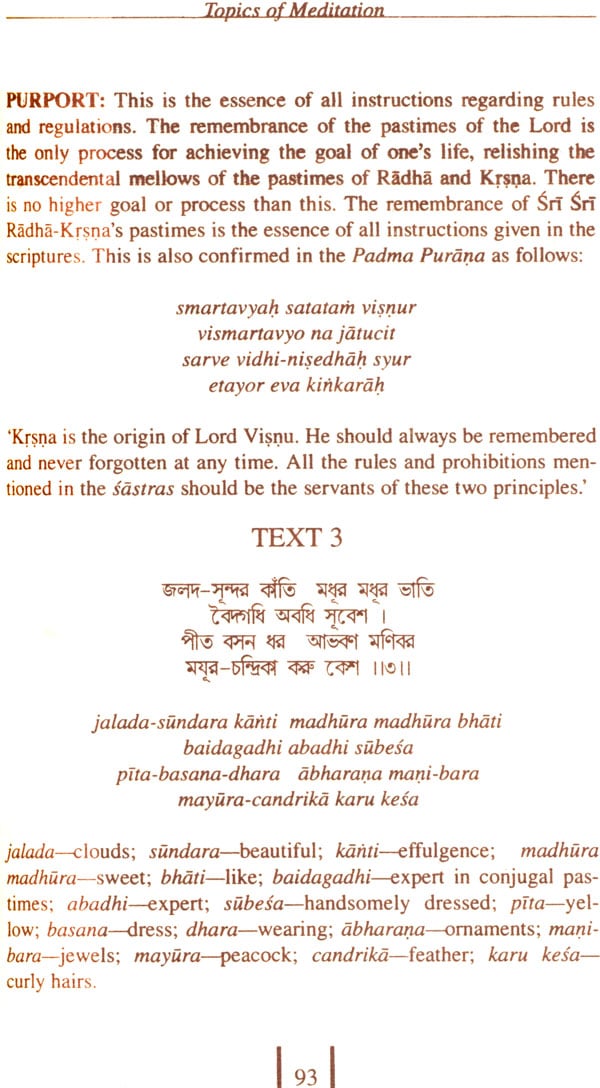 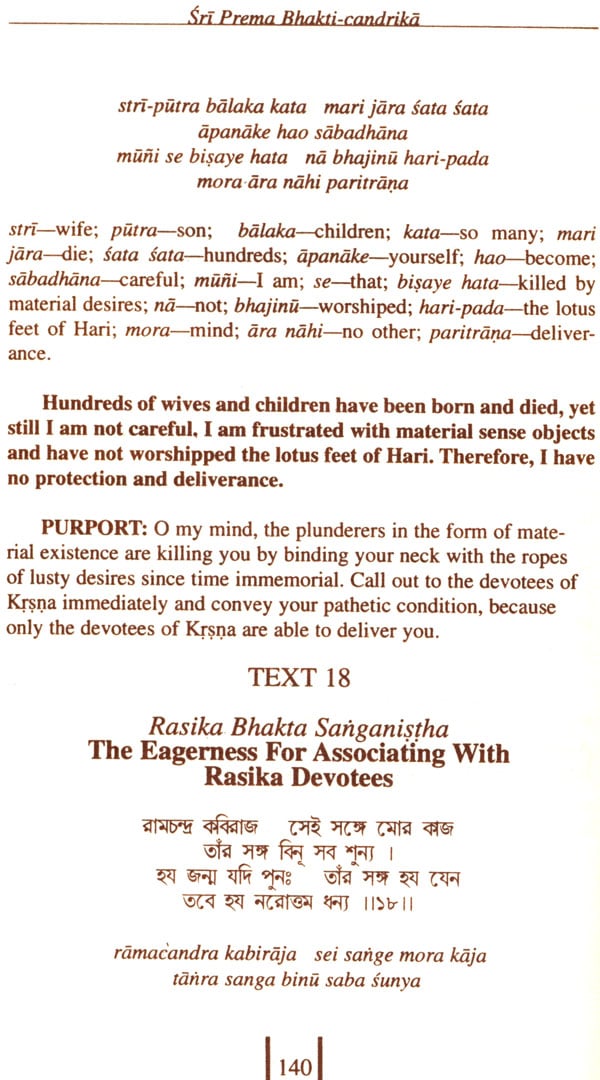 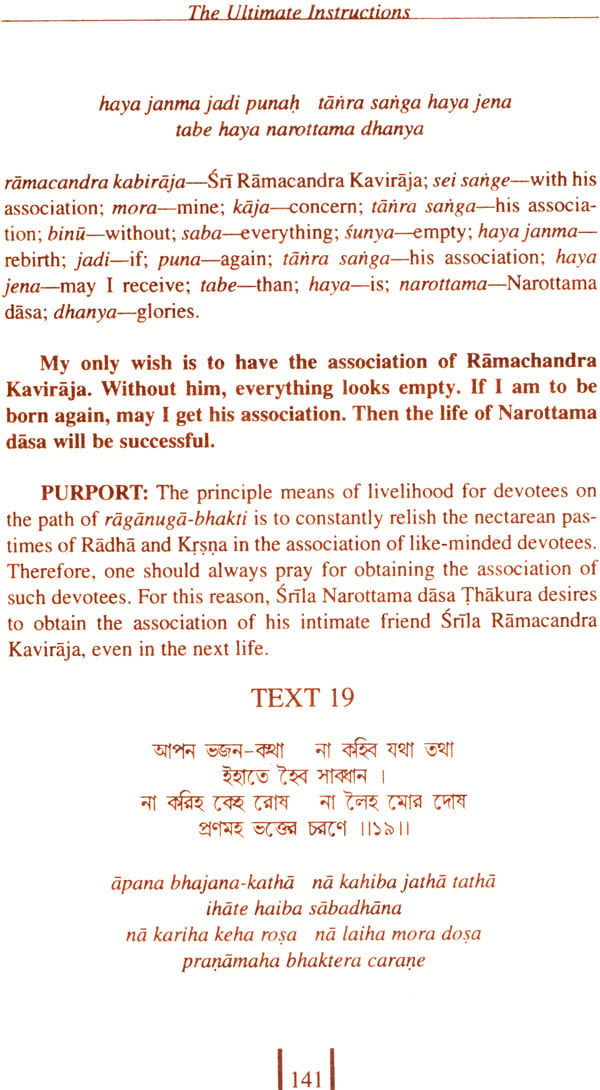 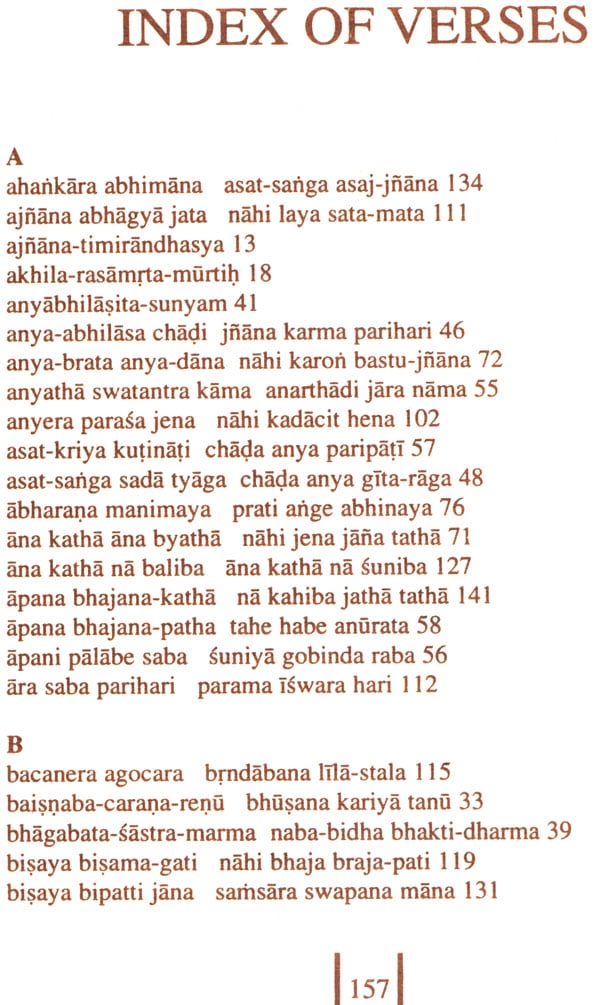