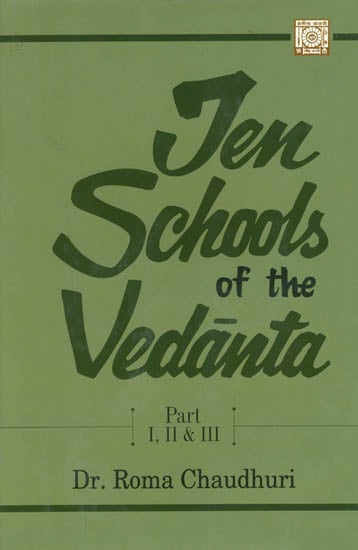 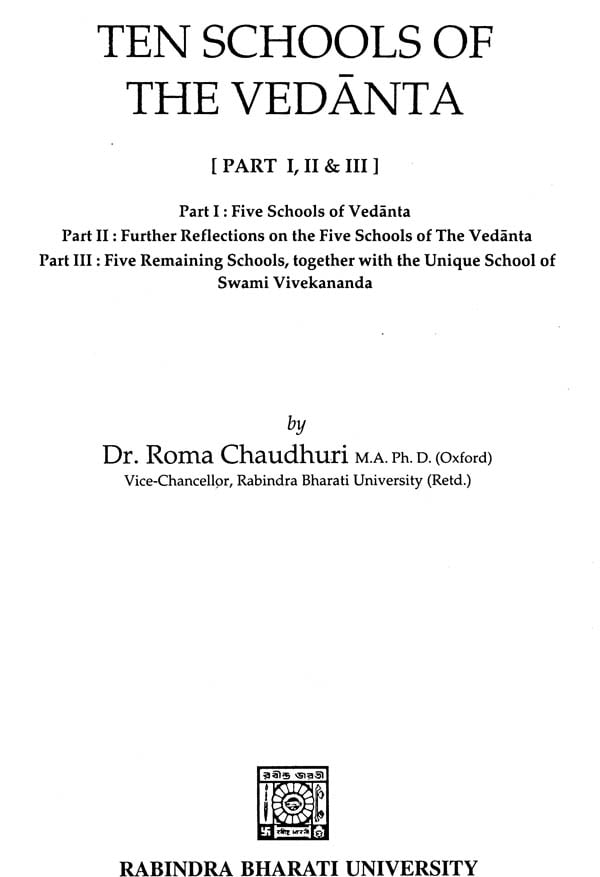 Vedanta, as the very name suggests, stands for the pinnacle of knowledge par excellence, otherwise called para vidya, the one that leads to emancipation from the bondage of mundame limitations (sa vidya ya Vimuktaye). As a sastra, it is rooted in the upanisads (upanisatpramanam) and developed in Brahmasutra-s, commentaries thereon, followed by subcommentaries, scholia, digests etc. and relevant parts of epic and puranas viz. Srimad-Bhagavadgita, Visnupurana, Bhagavatapurana and the like (tadupakarini ca sastrani): In traditional parlance, this whole corpus is distributed into three phases viz. sruti, sutra and smrti. Interestingly, there were conflicting observations in the upanisads and the author of the Brahmasutras had to bring them to unison to suit his purpose viz. propagation. of Brahman as the unifying principle underlying all diversities in the universe. The question of relationship between this Brahman and individual beings and things gradually came to be interpreted variously in different quarters so much so that different schools of Vedanta emerged in course of time, each with a vast literature and sizeable following at different stages of history in different regions.Concept of emancipation and role of karman, jnana and bhakti in realization of the ultimate goal varied accordingly. While Sankara and his followers upheld jnana as the unique way and discarded jnana-karma-samuccaya, Vaisnava vedantins opted for transformation of knowledge (jnana) into devotion (bhakti) as the only way to emancipation. To Sankara a liberated invidual is supposed to be dissolved into Brahman (Brahma veda Brahmaiva bhavati) and therefore there is absolute monism (kevaladvaita) since jivo Brahmaiva naparah in fine; to a Vaisnava, however, there is eternal separation between the Lord Krsna and His devotee. All that the latter can aspire is either association, semblance or otherwise with the Lord. The Gaudiya Vaisnavas come up with acintya-bhevabheda-vada, the theory of inconceivable difference and non-difference at the same time. While Madhva, Nimbarka, Vallabha, Ramanuja, Sricaitanya had their own way of interpreting vedanta in accordance with the Vaisnavite faith they practised, Saivas and Saktas too did not lag behind in offering their interpretation. Also, there were sub-schools in some cases. Followers of Sankara, for example, come out to away themselves in three prasthanas named after the Vivarana, Bhamati and Samksepasariraka.

Needless to say, Bengal's contribution to Vedanta is substantial in some of the above schools.

Apart from the Gaudiya Vaisnavas of acintya-bhedabheda following, Madhusudana Sarasvati of Advaitasiddhi fame is a great name in Sankarite Vedanta. Pancanana Tarkaratna of Bhattapalli authored his Saktibhasya on Brahmasutra in the 19th century A.D. Translation of some major upanisads by Raja Rammohan Roy paved another way to interpreting Vedanta as a challenge to christianity of the colonial missionaries from Europe. But it is with Practical Vedanta vouchsafed by Swami Vivekananda and Rabindranath Thakur's interpretation in terms of ananda as the essence of everything (anandadhara vahiche bhuvane) that Vedanta was rejuvenated as philosophy of the new era. Rabindranath longed for emancipation realized in every individual mind (amar mukti sarvajaner maner majhe); to him, it occurs as a blissful ecstacy among thousands of mundane ties (asamkhya bandhan majhe mahanandamay labhiba muktir svad). That which is attachment at the initial stage, therefore, transforms itself into deliverence (moha mor muktirupe uthibe jvaliya), the poet felt.

Studies in vedanta in the twentieth century Bengal absorbed all this rich legacy of philosophical deliberations and aesthetic realization. Even if Pundit Iswar Chandra Vidyasagar expressed his strong reservation on Vedanta and Samkhya systems of thought in the 19th century context, serious studies did not stop. But instead of reading vedanta as a sastra leading to renunciation, it came to be accepted as a philosophy of higher meaning and greater relevance of mundane existence of human kind on earth in the new era of enlightenment.

Dr. Roma Chaudhuri's Ten Schools of The Vedanta (3 volumes) is a brilliant compendium of this vast pool of knowledge embedded in Vedanta literature evolved through centuries together. A serious scholar and dedicated researcher, a poetess of unique merit in Sanskrit, a champion of human development through proper education, an able academic administrator and a celebrated oratress of wide social acceptance she left her mark of ingenuity and social commitment in whatever she performed. Her students and junior colleagues still remember their beloved Romadi for her motherly affection and guidance. She nurtured Rabindra Bharati University as its second Vice-Chancellor during very hard days of social turbulance. The University community gratefully remembers this noble soul in her birth centenary year and brings out the new edition of her magnum opus as a tribute to her whom late Swami Prajnanandaji rightly called Brahmavadini. 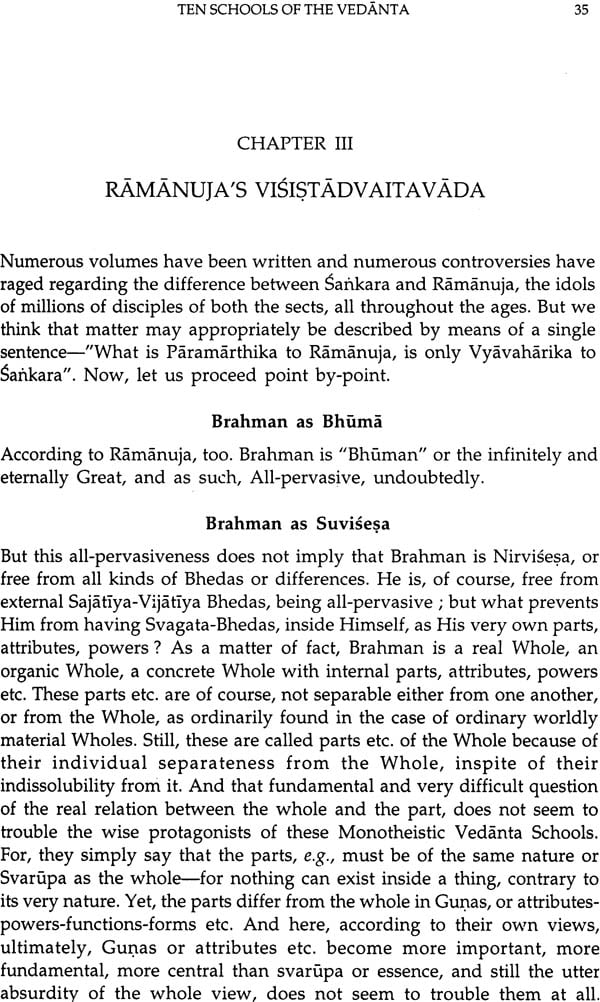 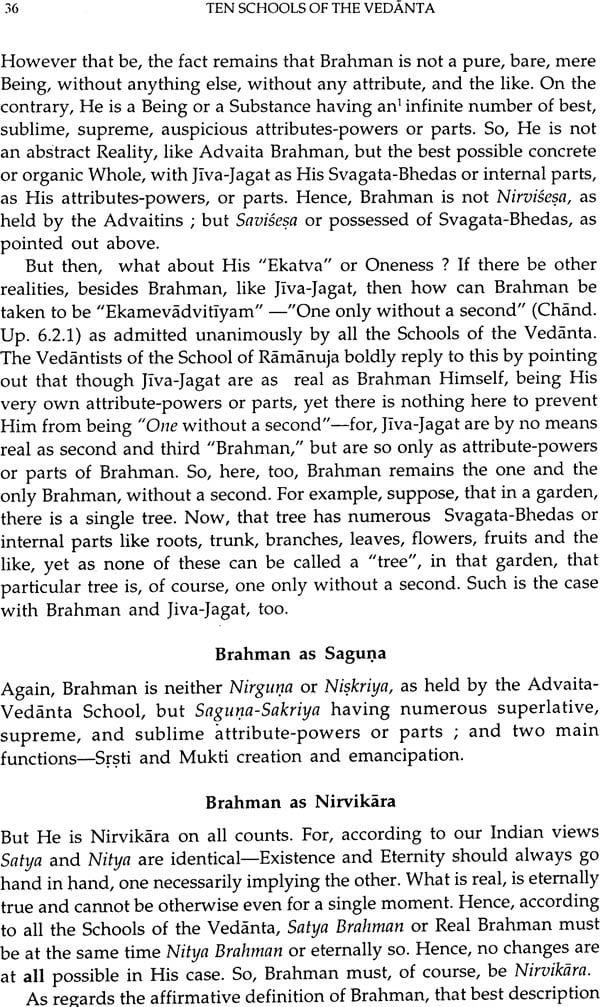 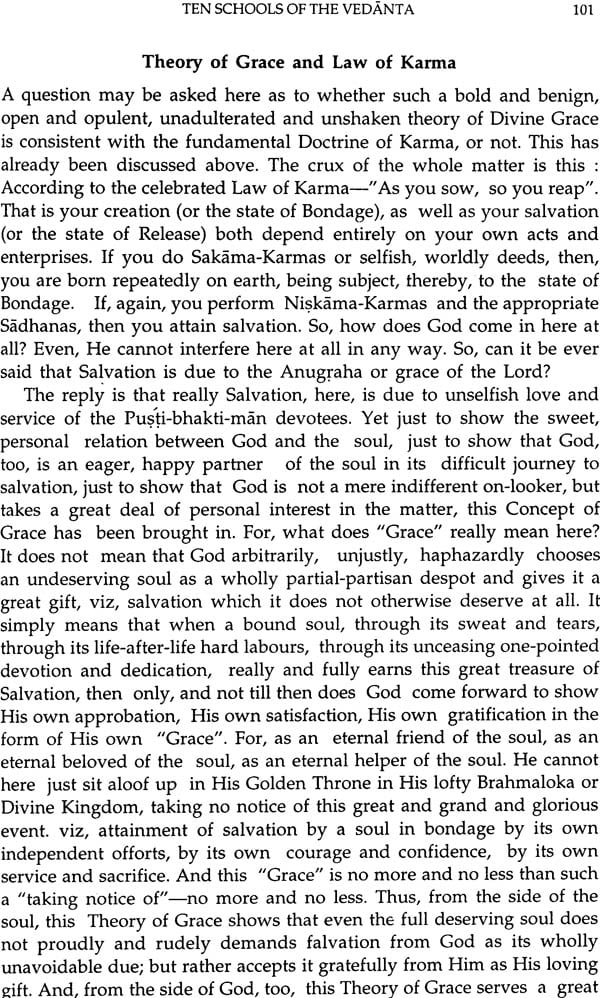 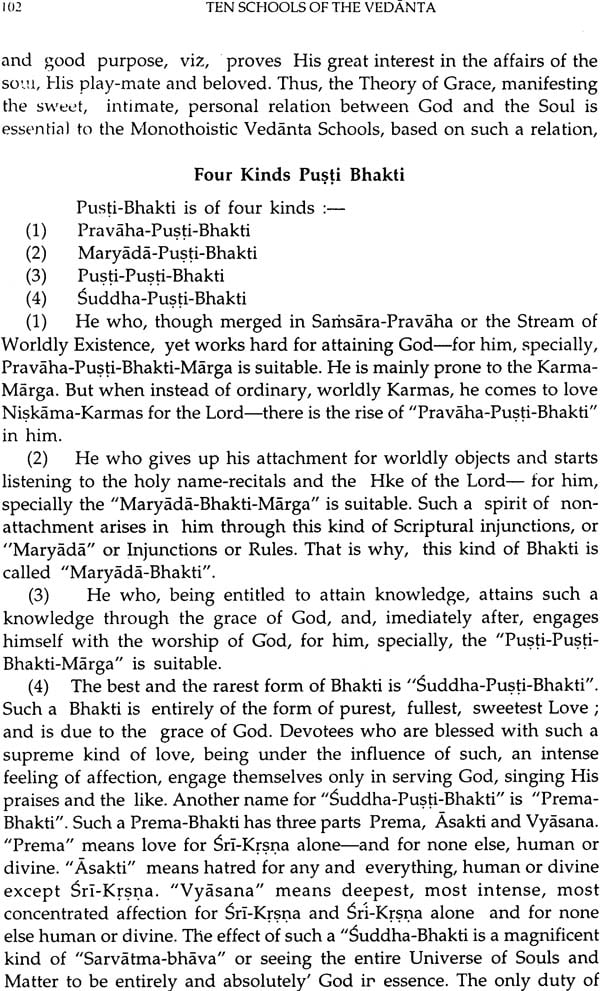 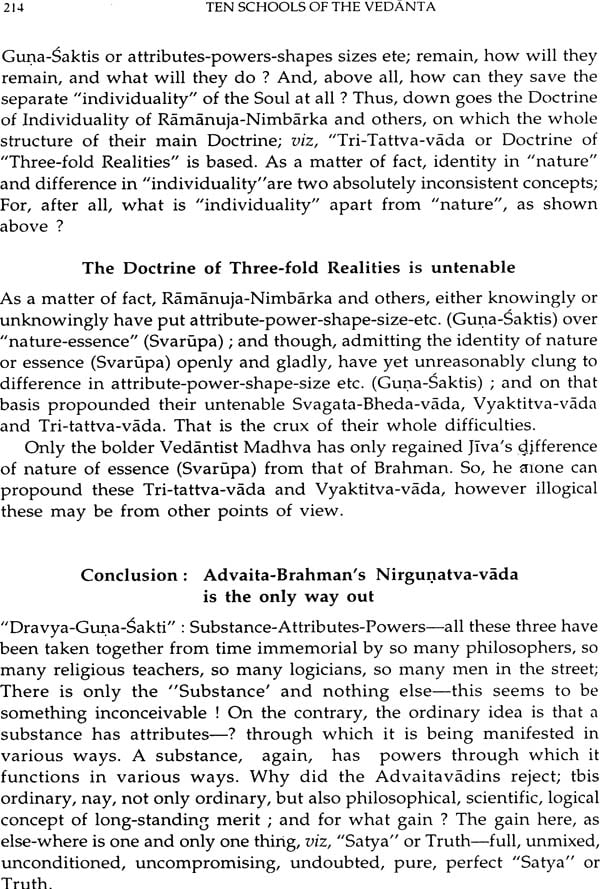 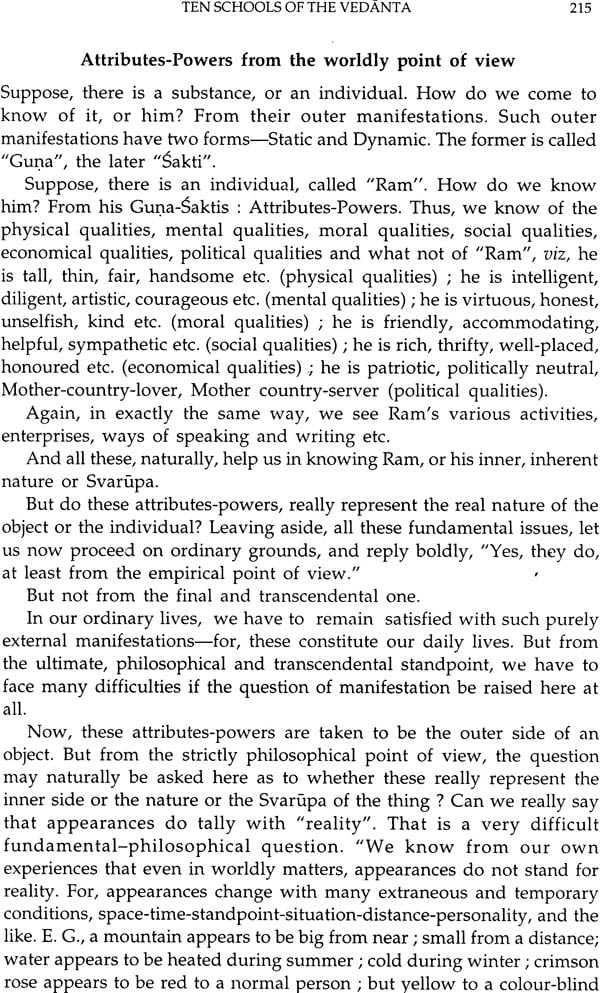 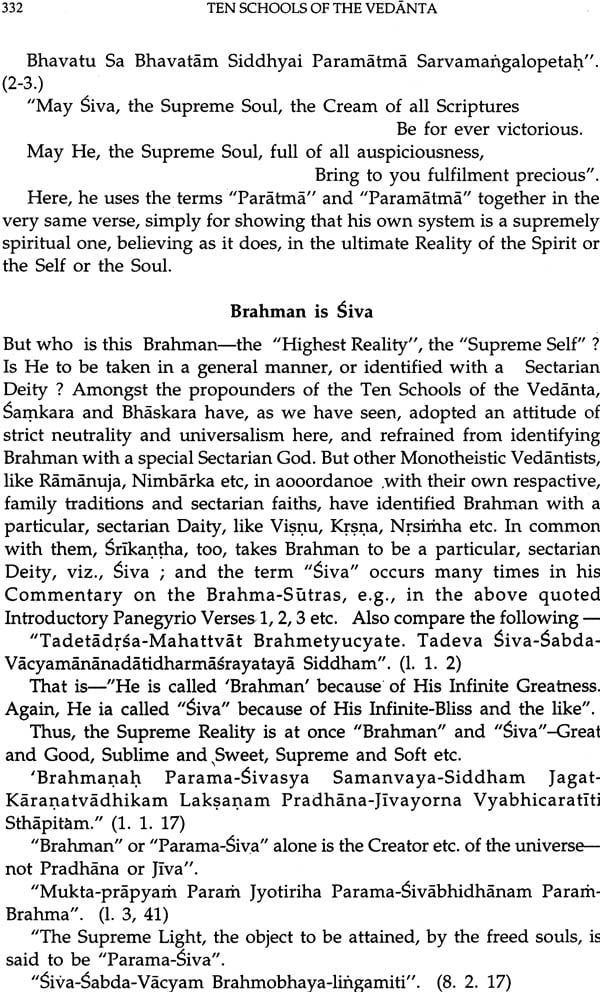 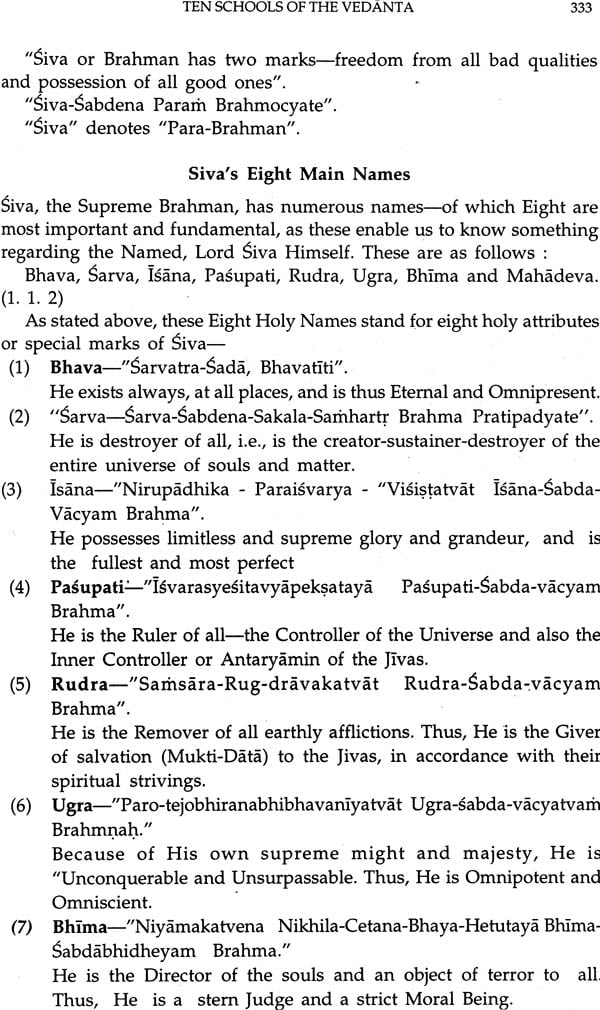 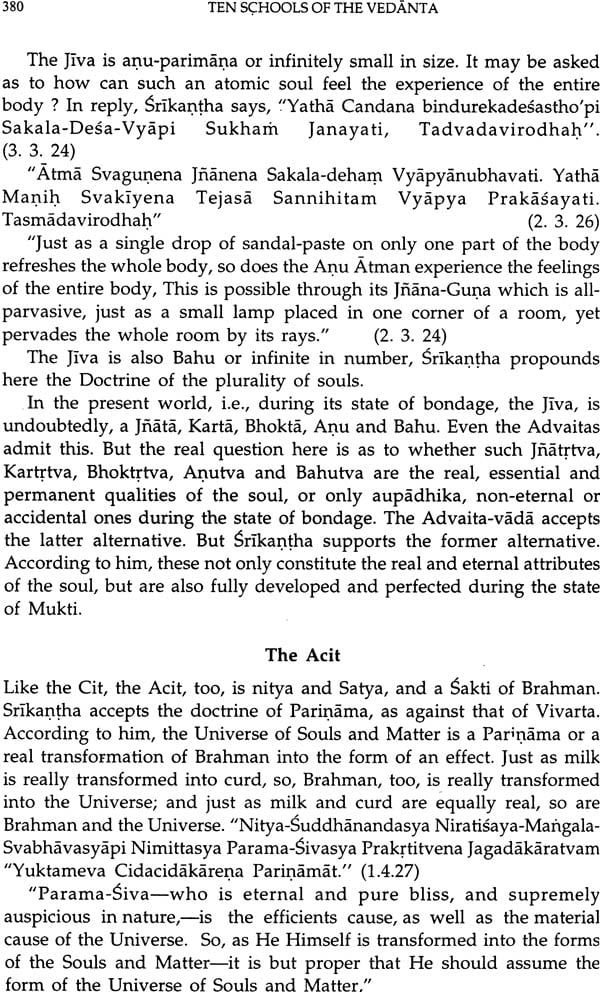 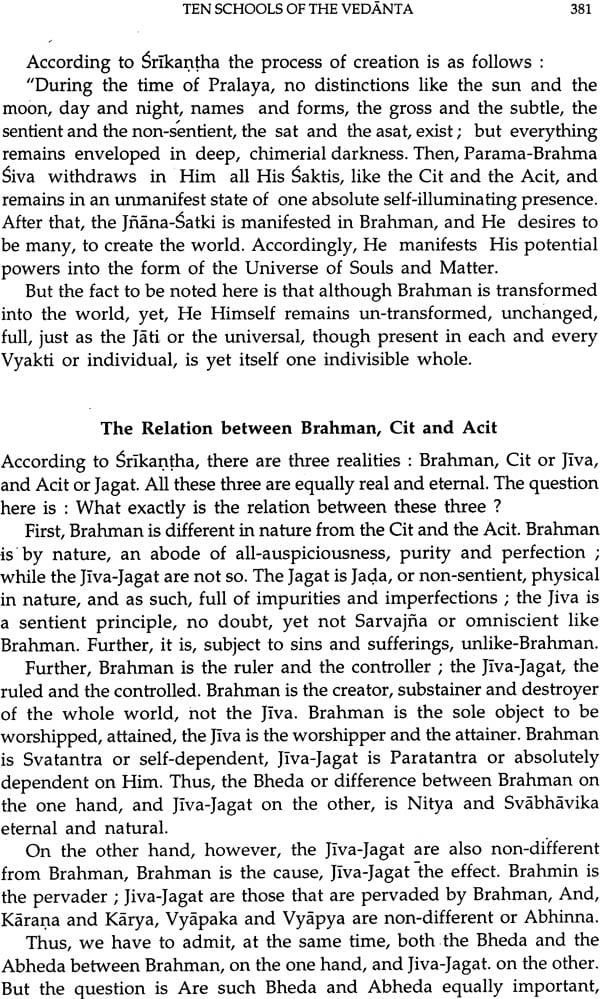 Visistadvaita and Dvaita (A Systematic and Comparative Study of the Two Schools of Vedanta)
By B.N. Hebbar
$78
FREE Delivery

Bhakti Schools of Vedanta (Lives and Philosophies of Ramanuja, Nimbarka, Madhva, Vallabha and Caitanya (Chaitanya))
By SWAMI TAPASYANANDA
$31
Sold Out

The Philosophy of the Vallabha School of Vedanta (Rare Book)
By K. Narain
$55
Sold Out 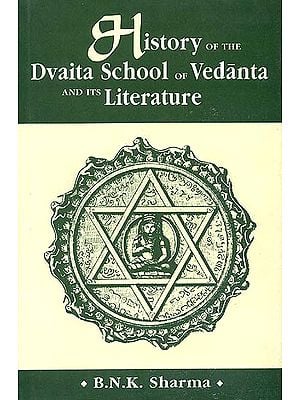 History of the Dvaita School of Vedanta and its Literature
By B.N.K. Sharma
$84
FREE Delivery

The Philosophy of Visistadvaita Vedanta (A Study Based on Vedanta Desika’s Adhikarana-Saravali)
By S.M. Srinivasa Chari
$47
FREE Delivery
Best Seller

Vedanta-Parijata-Saurabha of Nimbarka and Vedanta-Kaustubha of Srinivasa: Commentaries on the Brahma-Sutras (3 Volumes)
By Translated and Annotated By. Roma Bose
$111
FREE Delivery

Modern Perspectives on Vedanta (Proceedings of The 20th International Congress of Vedanta)
By Girish Nath Jha and Bal Ram Singh
$60.80
FREE Delivery
$76  (20% off) 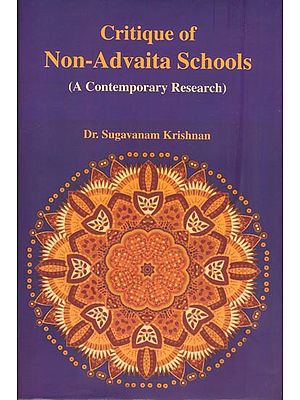 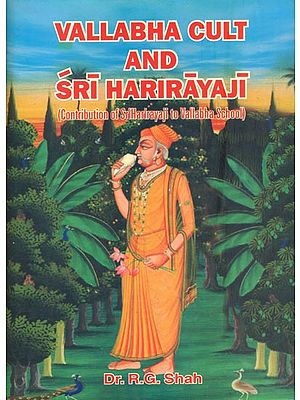 Vallabha Cult and Sri Harirayaji - Contribution of Sri Harirayaji to Vallabha School (An Old and Rare Book)
By Dr. R. G. Shah
$60.80
FREE Delivery
$76  (20% off)
Book FAQs
Add a review
Have A Question