$15
Quantity
Notify me when this item is available

Surya Narain Saxena I now 83, is a radical Hindu thinker I analyst I writer I journalist and b’ caster in English & Hindi. Over the last 50 years or more he has written in almost all prominent English & Hindi dailies and periodicals and keeps writing till date. Retired from a senior position in the Indian Information Service and starting as a journalist in the Press Information Bureau I worked his way upto levels that required experience of writing and reporting as a correspondent A.I.R., shimla; Director, public relations I Delhi Administration; Editor in Publications Division I Ministry of Information & Broadcasting. He has several titles in English and Hindi to his credit.

The Author, besides a writer, is a social and human rights activist and an environmentalist and has fought many a battle in courts I human rights bodies and the media in the cause of heritage I Adivasis and civic issues.

The book is Shri Surya Narain Saxena’s painstaking and in depth account of silent, dedicated and multidimensional work of the voluntary organization, Akhil Bharatiya Vanvasi Kalyan Ashram, among the tribals, the Vanvasis. The narrative is a study of the missionary endeavour, the odds faced on the path and how these were overcome by those who gave their lives and years to build the body from a molecule to its present shape and size.

Our Vanvasis are, by nature, very simple and at the same time very truthful, honest and hard working. They are culturally very rich. Vanvasis follow the basic principles of Hindu Dharma. They worship nature. They respect the elders and believe in rebirth. Though steeped in poverty, deprivation and ignorance, the Vanvasis pride in the multi-coloured and multi faceted ancient Bharatiya culture and in that they are a part of it. They number about 60 million, who .live in the forests and hilly areas. The historical upheavals of centuries cut them off from other sections of the society. These children of nature were rendered vulnerable to alien influences largely due to British policy of ‘divide and rule’.

The Vanvasis called ‘Aboriginals’ by Europeans, were separated from the main stream society and were declared ‘animists’ having no religion worth the name. The tribal regions of the country were sealed off as ‘Protected Areas’ to all except Christian missionaries to carry out their nefarious designs to covert them to a foreign religion and subvert their heritage and all loyalties. Foreign Christian Missionaries found them an easy prey for conversion to Christianity by force, fraud and allurement and destroy their rich and sublime culture.

A crying need of the country was to awaken the Vanvasi brethren to stand on their own legs and enable them acquire sufficient strength and capacity to develop themselves socially, educationally and economically at the same time to protect themselves from evil forces. Shri Bala Saheb Deshpande took up the challenge. He was inspired and guided in his mission by Mahatma Gandhi’s disciple Thakkar Bapa and Param Poojaneeya Shri Guruji Golwalkar, the second Sarsanghachalak of R.S.S. He founded Vanvasi Kalyan Ashram at Jashpur Nagar, then in Madhya Pradesh in the year 1952.But how?

Bala Saheb wuld collect and teach some half of a dozen not- so-willing tribal children under a tree in the winter of 1952. From this humble beginning to a network of about 11000 small and big service projects of varied nature at over 8000 locations in tribal areas, from Arunachal Pradesh to the Andaman-Nicobar and Himachal Pradesh to Kerala, with a band of over 1200 dedicated full-timers, as of today, is no mean achievment for any voluntary organization.

The appeal of Vanvasi Kalyan Ashram touches the very roots of ancestral culture. Functions like Rama Navmi, Govardhan Pooja and tours of Sadhus and Sanyasins are able to bring isolated Vanvasis together. Samskara Kendras for women and children, schools, hostels, reading rooms, free dispensaries and village and cottage industries are being started in increasing number in all states from Himachal Pradesh, Uttar Pradesh and Bihar in the north, to Tamil Nadu and Kerala in the south. The dynamic role of Vanvasi Kalyan Ashram has fired a number of service-minded Hindu missionaries to reach out to remote areas in the country and to spread the message of love and brotherhood. Its entry in the north-eastern states has resulted in protecting the cultural ethos of Nagas and many other Janjatis. The entry of Vanvasi Kalyan Ashram in the north-east has helped re-inforce cordiality among some 180 tribal groups and join them with the cultural mainstream of Bharat. The late revered Rani Gaidinliu had taken the lead in bringing together the three sub-tribes of the Nagas-Zemei, Liangmei and Rongmei to form Zeliangrong Herakka Organisation, Eminent Khasi leaders like Sri Onderson Mawri and Sri Hipshon Roy also re-discovered their spiritual and cultural heritage and brought back a number of Christian Khasis to their ancestral Khasi faith.

In this book readers will find how undeterred by success and failure, the Vanvasi Kalyan Ashram is pleading its cause in the courts, media and national and international human rights organizations so that every Vanvasi brother and sister can live a life with dignity.

‘A chain is as strong as its weakest link’. No doubt, the readers will be inspired to strengthen the weak link of the Hindu society, the Janjatis or the Vanvasis. The book is worth reading since it ‘offers’ some ‘hows’

Our country is definitely richer, better and more colorful, because of our peace loving yet energetic tribals known in the Constitution of India as Janajatis. They have been in the vanguard of most of the national movements. They have formed an inseparable part not only of our folklore, mythology and history, but also of our freedom struggle. In recent times they have shone brilliantly on the sports horizon. This is nevertheless true that they have not yet been given enough opportunities to become part of the national mainstream of progress and prosperity.

May be they are too contented in their own surroundings but I feel not much attention has been paid to these disadvantaged sections after Independence. While India leapfrogs into the 21st century, dominating the global economy for software and IT enabled services, tribal societies need to participate in our development as an equal partner and contribute in realizing the dream of national rejuvenation.

A few decades back RSS Sar Sangh Chalak Pujya Shri Guruji inspried a renowned freedom fighter Shri Rama Kant (Bala Saheb) Deshpande to start the Kalyan Ashram for the service and economic development of tribal society. Today that seed has grown into a mass movement. Akhil Bharatiya Vanvasi Kalyan Ashram has built up its presence in almost every nook and corner oftribal India serving through hospitals, schools, hostels, balwadis, adult education centers and various other humanitarian activities. From Andamans to Leh and from Arunachal to Nilgiri hills, there is a wide network of dedicated workers, men and women alike, who have silently brought about deep changes in the lives of the tribals.

Tribals of India have yet to be understood in their historical perspective. Traditionally, they have never been regarded in society as low or inferior. As scholars say, they helped Sri Ram and while Angad, Sugriva, Shabari and Hanuman were all tribals, in Arunachal Pradesh Rukmini is believed to be from a ldu Mishimi tribe. In recent times, they helped Shivaj i, Rana Pratap and fought more than hundred battles against foreign invaders. Legendary heroes like Birsa Munda, Rani Gaidinliu, and Thalakkal Chandu are the immortal icons of India’s proud history. Kalyan Ashram is continuing with the same tradition of blending modernity with a legitimate pride in the traditions and Dharma of their ancestors. This task needs greater attention and support of our countrymen. The more we strengthen efforts to educate and bring tribals into the mainstream as patriotic and proud Indians, the more we would be contributing to national consolidation.

It is ironical that in the past while certain colonial ‘scholars’ and anthropologists kept labeling various tribes as ‘criminal tribes’, ‘head hunters’, etc., aggressive proselytizers contemptuously - called them heathens and pagans, posing themselves as the sole emancipators for their ‘sinful’ souls.

Though billions of rupees have been spent on counter insurgency operations, still I believe the solution lies more in ending their alienation through selfless service-oriented organizations. More we bring these highly brilliant and ready-to move-ahead tribal youth in the economic mainstream with preservation of cultural roots, greater would be the strides the nation would make towards peace and prosperity.

The NDA Government took a wise decision, when it decided to establish a separate Ministry for tribal welfare. Hitherto there used to be one Ministry attending to the needs of both Scheduled Castes and Scheduled Tribes. True, both these sections are disadvantaged sections calling for special care. But the problems of scheduled tribes are distinct. In fact, sometimes I feel some anti- social and anarchist elements have made tribal areas their operational grounds for the simple reason that, these brave yet deprived children of our country are innocent and vulnerable. Their conversion through dubious means once shocked Pandit Ravi Shankar Shukla so much that the Niyogi Commission was formed to study in depth the issue of proselytisation in tribals area. The findings of the Commission brought to light, what was being said for long by the Gandhian workers like Thakkar Bapa. This aspect needs careful examination and a civil dialogue so that the Gandhian view of sustainable development and preservation of cultural identity is not marred.

I am sure this book, so painstakingly written and produced would go a long way to spread the right atmosphere regarding tribal communities and remove misgivings about them. I congratulate the author, Shri Surya Narain Saxena, whom I have known personally for years and who himself has been a dedicated soul working for the cause, for having thought about publishing this book, which will give .a much-needed introduction to the noble and great contribution of the Kalyan Ashram. L.k. Advani 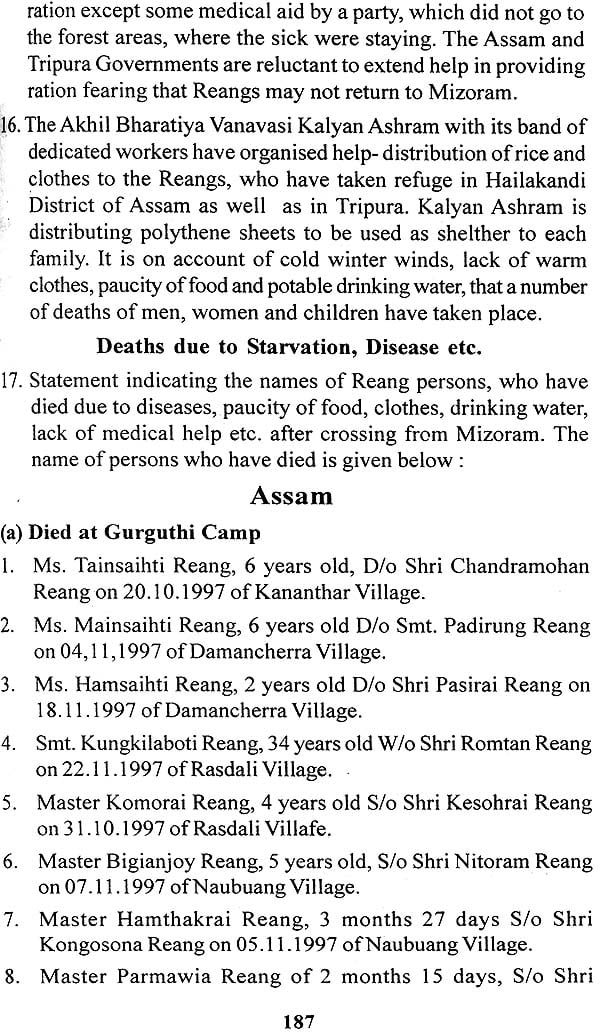 Human Marriage (A Comparative Study of Vedic and Tribal System of Odisha)
By Harekrushna Mishra
$23.20
FREE Delivery
$29  (20% off) The Role of Weekly Markets in The Tribal, Rural and Urban Setting (An Old and Rare Book)
By Irawati Karve and Mrs. Hemalata Acharya
$35
Out of Stock An Approach to The Cultural Mapping of North-East India: In Respect of Tribal Tales
By Pratibha Mandal
$49.60
FREE Delivery
$62  (20% off)