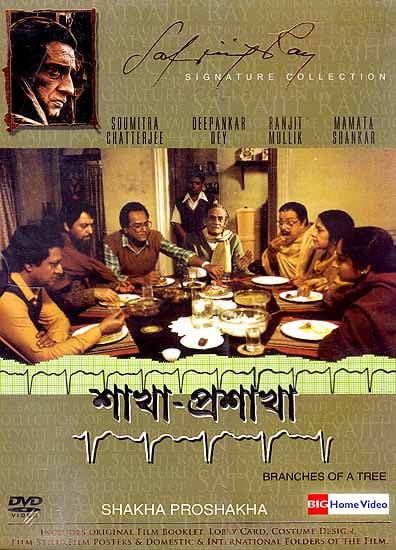 The story is set in Anandapur a township in a mica mining area in Chhoto Nagpur in January 1990.

The film opens on the 70th birthday of the most eminent citizen of the town – Anandamohan Majumdar – who through sheer hard work and honesty – rose front a low position in the Orient Mica works to be its General manager.

He new lives a retired life in his large mansion with his senile father and his second son Proshanto who became mentally deranged after a motor accident while studying in England.

Anandamohan has three other sons – Probodh, Prabir and Pratap – who are all well placed in jobs in Calcutta. Although stories about corruption black money and the corrosion in values in the city reach his ears. Ananda stili believes that if a man decides to be honest he can still be so and make good in life.

At the civic reception in honour of his birthday, Anandmohan has a heart attack

The family consisting of the eldest son Probodh and his wife Uma, the third son prabir his wife Tapati and his 5 years old son Dingo and the youngest son Protap arrive from Calcutta. They stay for a week in course of which we learn that Probodh the general manager of big company has accepted the fact of a change of values and has taken recourse to black money in order to live well.

The same applies to the businessman Probir. The youngest, Protap, had been an whom he loved and respected as an elder brother had been involved in a swindle and pocketed a huge amount of money form one of their own clients. Disillusioned Protap has neo joined a theatrical company.

On the day of the family’s departure Probir’s son Dingo tells Anandamohan that he had overheard his father and his un accusing each other of resorting to black money.

The revelation shatters Anandamohan until for the first time Proshanto comes info his room and Anandamohan suddenly realizes that he still has one son who is incorruptible. The grasp each other’s hands.

Farewell My Friend: A Living Legend's Tribute to the Legend, who is no more (Satyajit Ray) (Audio CD)
$28
FREE Delivery

Satyajit Ray Three Movie Pack: Agantuk (The Stranger), Ganasatru (An Enemy of the People), Ghare-Baire (The Home And the World) (Set of 3 DVDs with English Subtitles)
$30
FREE Delivery

Jugalbandi (Audio CD)
$28
Out of Stock