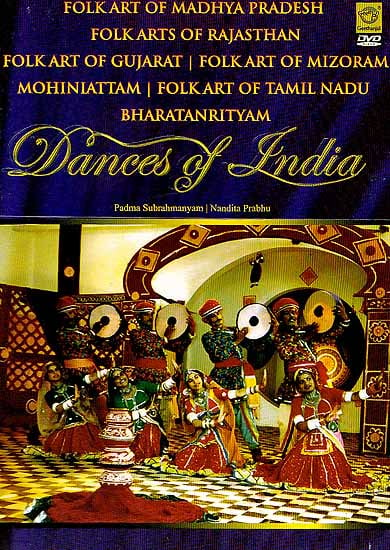 EPISODE ELEVEN
FOLK ART OF MADHYA PRADESH - Phagun
FOLK ARTS OF RAJASTHAN - Tera tali & Duff Dance
FOLK ART OF GUJARAT - Dhandiya Ras
This episode starts with the state of Madhya Pradesh(MP) in Central India. The world famous Khajuraho group of temples is located in MP.MP is well known for its diamond mines and dense forests. Where does a forest stand without rains? The village folk of MP are overjoyed on seeing rain clouds and perform the rain dance Phagun. This episode also features Tera tali - a Rajasthani folk dance where small symbols or manjras are tied to the hands and legs of the dancers and bells sound in rhythm as the dance. This is followed by another Rajasthani number Duff Dance, performed with small circular drums in hand, during the Holi festival. The men and women of Gujarat perform Dhandiya Ras- a vigorous and rhythmic dance with batons, where the dancers lep and crouch in twirling patterns.

EPISODE TWELVE
FOLK ARTS OF RAJASTHAN - Bhavai & Tippani
FOLK ART OF MIZORAM - Bamboo dance
MOHINIATTAM by Nandita Prabhu
This episode starts with a Rajasthani folk number “BHAVAI” danced by balancing several pots one above the other. Most of the folk dances evolved as a spontaneous way of life rather than entertainment. For example “TIPPANI” was danced as the women labourers were laying roads much before the arrival of mechanized gadgets for road-laying, Indeed rhythm is the back-bone of dance and the tribes of Mizoram in Eastern India perform the Bamboo dance, weaving intricate patterns in and out of the bamboo sticks. As we travel about 3000 kms from Nagaland to Southeastern India, we come to the green landscape of Kerala, known for its backwaters coconut trees and martial arts, besides dance forms. This episode also features Mohiniattam - a classical dance form of Kerala, performed gracefully by Nandita Prabhu.

EPISODE THIRTEEN
FOLK ART OF RAJASTHAN - Baaraath
FOLK ART OF TAMIL NADU - Kolattam
BHARATANRITYAM by Dr. Padma Subrahmanyam
There is no city or state in the world which does not celebrate a wedding. However there are some people who celebrate it with pomp and splendour like the Rajasthanis. Here is a dance Baaraat describing a Rajasthani wedding. We move back to Tamil Nadu where we started and show a small folk number Kolattam performed by young girls in villages. All the dance forms we have seen in this serial, the classical and folk forms of India, have a common heritage, derived from Natyashastra. This aspect of Unity in diversity has been well researched by Dr. Padma Subramanyam and forms the basis of her style Bharata Nrityam. This episode features a Kuyilpattu Varnam (a song by poet Subramaniya Bharati) performed by Dr. Padma. The serial concludes with a montage of the various dance forms portrayed in the these 13 parts.